I knew the end of the world was near when I saw the phrase “butt crack” in the Chronicle of Higher Education. As I turn over the February page in my 2012 Apocalypse Survival Guide calendar, I find that the Romans predicted an end of the world to arrive at 634. B.C.E. I’d say the Romans are still waiting, but they are long gone, the only residue remaining of their empire being the Vatican and its spiritual, rather than political, power. So why did the Romans think the end was near? It had, according to my calendar, to do with a dozen eagles being seen at once. In the spirit of Hal Lindsey we can parse that vision a bit. 634 was just 32 years after the infamous 666 B.C.E. Of course, no one knew it was 666, or even B.C.E. for that matter. Nevertheless, when God picks his super-three he stays with it. Thirty-two turns out to be nearly the traditional age ascribed to Jesus, but minus one year. Keep that in mind.

Eagles make occasional appearances in the Bible, but since God is a forward-thinking deity, the reference is surely to the United States! And how many colonies were there originally? Was it not 13? Again, the significant number is off by one. In some cases we might count this up as poor arithmetic, but with the subtle destroyer of the universe we know it is not only intentional, it is also significant. So, Rome saw the 12 eagles—the United States—in 634. What they really meant was the Maya, obviously. That would account for the missing one, since central America is less than the greatness that is the United States. And besides, there were twelve apostles, but when Judas was replaced by Matthias there were 13. What more proof do we need? These dozen eagles were indeed a divine sign. Only the world did not quite end in 634.

Maybe the problem was with the Julian calendar, or maybe the eagles were just confused. As my calendar says, “Antichrists been and gone” and yet we are still here. The transient nature of apocalypses never dampens the truly hateful spirit. We can’t comprehend this cobbled-together doomsday without at least trying to understand the evangelical despising of the world. This view is based on a quasi-biblical determinism that emphasizes God’s ultimate plan to destroy the universe that is only revealed in piecemeal fashion throughout select books of the Bible. But God is like a mystery writer who sadistically leaves out the last chapter of the book. The tension is unbearable. How much more before we begin to crack? But isn’t that what started this whole apocalypse in the first place? 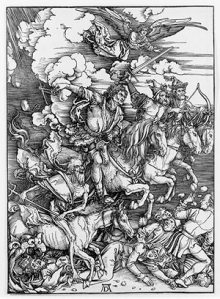 The horsemen close in

3 thoughts on “Revealing the End”