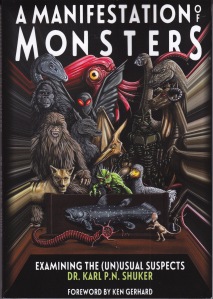 It’s the time of year when young men’s minds turn to monsters. Well, at least this middle-aged man’s does. Seeing a book by Karl P. N. Shuker entitled A Manifestation of Monsters, I was intrigued. I had some Amazon points burning a hole in my internet, so I took a chance on it. The fact is good books on monsters are hard to find and Shuker is listed as “Doctor” and that sometimes stands for something. Subtitled Examining the (Un)usual Suspects, the book is a curious Mischwesen of folklore, actual animals, and cryptozoology. The latter should be no surprise as Shuker is a noted cryptozoologist. Compiled from many of his previously published articles, the book contains some fascinating accounts of extinct creatures and some improbable accounts of modern monsters.

Since Banned Book Week is a time to explore challenged ideas, why not read about some cryptids? They are anti-establishment monsters. Banned creatures. As is usual with monsters, there’s little rhyme or reason to the arrangement. Unlike many in the field of cryptozoology, Shuker is skeptical of outlandish claims, and has actual training as a zoologist. What stood out to me as I read accounts of unusual creatures is that some people report seeing the oddest things, and that other people are driven to hoax all kinds of monsters. It is clear that the human mind is programmed to believe in the possibility of the improbable. Critical thinking, as anyone with advanced training knows, is hard work. Belief can be a far simpler matter. We crave a world with the exotic, and potentially dangerous. Shuker’s piece on the mythical chupacabra demonstrates that nicely.

While I’m pondering things that are banned, I consider how some who use critical faculties well like to disparage others. This, of course, is not in the best interest of science. We haven’t discovered everything yet. We think that because of the internet we’ve gone about as far as we can go in hive-mind mentality. Never mind that bees and ants beat us to it. People, many of them very intelligent, continue to see things they can’t explain. Others say that any living creature larger than a breadbox has already been discovered. I tend to think the world is a pretty big place and that people prefer to huddle together in cities for a reason. The mountain gorilla, for example, was discovered just in 1902. Now that the season for monsters is upon us, I like to imagine what else might be wandering around unseen by human eyes. And I hope banned ideas may continue to thrive in the forests of our minds.