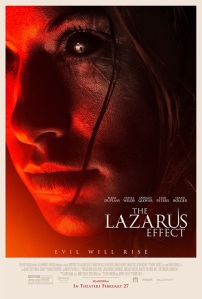 Horror movies provide a strange consolation at times such as this. When evil has overtaken democracy, it’s almost like strategy, watching how fictional characters deal with things that are wrong, things that are too close to real life. The Lazarus Effect has been on my watch list since the last sane presidential administration, but need finally dictated that I watch it. The premise is clear from the title—Lazarus is universally known as the dead man who came back to life. A group of medical researchers at a university in California find a way, through direct stimulation of the brain, to bring dead animals back to life. The idea is that they will give surgeons more time to resuscitate critical patients if they can get the formula right so that it works on people. An evil corporation steals their discovery and they have just a few hours to replicate the experiment to prove they are the ones who perfected it. Predictably one of them (Zoe) dies and her fiancé brings her back to life. Mayhem ensues.

Those who’ve seen Pet Sematary will find many similar ideas covered here. Those who come back from the dead are somehow distorted versions of their former selves. Those who do the resurrecting end up dead at the hands of the modern-day Lazaruses. There’s not much unexpected here except that Zoe, a Catholic, ends up in Hell. There’s quite a bit of talk about religion versus science—what really happens when you die. Zoe, despite being a practicing Catholic, has never been forgiven for her childhood sin of setting a fire that killed some neighbors in the apartment building. Religion and horror sharing the screen is something fairly common, but it is seldom as forthright as it is here.

Resurrection—necessarily a religious concept—is a frightening prospect. Horror films have shown many times that this is a miracle that just shouldn’t happen. At least not on this plane. (Those who’ve watched Re-animator know how bad the consequences could be.) Scientists, generally unbelievers in the cinematic world, just can’t accept either an afterlife or death. Using technology to challenge a godless fate, they inevitably end up losing. So it is in The Lazarus Effect. Some biblical scholars have suggested John’s rendition of the story is a kind of biblical horror tale. I mean, Lazarus had been dead four days in the warm climes of the Holy Land. His resurrection seems to have ended up well, however. Then again, there is an inherent difference between science and religion. Neither one, however, is now really in charge.

One thought on “Come Forth”