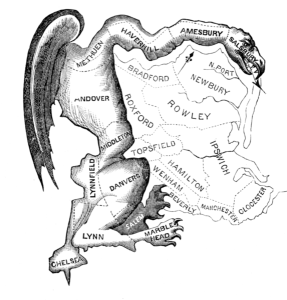 Cheaters, we were told as children, never prosper. It turns out that this chestnut never grew into a tree. Cheaters become Republican congressional leaders instead. What’s bugging me today is gerrymandering. The idea that you can change the rules even as the game’s in play is, well, cheating. We all learned how that felt when we were kids with our marbles, or cards, or pick-up-sticks. Nobody liked to be called a cheater. Now it seems to be the best path to the White House. And the standard-issue Republicans are fine with it. Me, I dream of a country where the people are free and fair. Where the rules that were established centuries before you were born can’t be changed because some lout with a lot of money says he feels the right way about unborn babies. A land where reason is real.

The idea that you can redraw boundaries to consolidate your power is even more insidious than the Electoral College. That’s a game that long ago lost its purpose, but the GOP won’t let it go because it always favors them. Problem is there will never be neutral turf again. Who didn’t have the experience as a kid of playing with someone whose luck had run out and then having them pout, “I’m taking my marbles and going home”? Who hasn’t been on the other end of that scenario? I certainly have. Sometimes it takes years to play out before things start to seem fair again. The point is, most of us grow up and most of us know the rule of law is a good thing.

The rule of law, however, has completely broken down in these Untied States. Any law can be jerry-rigged. All it takes is a mogul with a lot of money and underlings panting for handouts. Plain and simple selfishness. An American classic. There was a time, in living memory, when Watergate would sink a President. Now highly public extra-marital affairs are fine. Bill Clinton was impeached for a, well, I know the rules so I won’t say. Giving secrets to the Russians? A mere trifle. Top government posts for your family? Of course, go ahead. Using high government office to enrich you personally by gerrymandering which countries you’ll exclude from these hallowed shores? What’s wrong with that? Every step of the way the GOP wallows its filthy, cheating face in the dirt. And it wants to change the rules so it can stay this way for all time. Me, well, at least I can still dream, even if I lose all my marbles in this crooked game. It’s the American way.