In Nightmares with the Bible I use an idea penned by Edgar Allan Poe as one of the threads holding the book together.  One early reader complained that Poe didn’t write about demons, so the use of the great man was inappropriate.  That reader misunderstood me.  Today is Poe’s birthday.  As I think about the influence a writer can have on a young mind, I come back to this reader’s comments.  I can’t think of my book without Poe.  No, Poe did not write about demons, but he set the stage for what I’m trying to do in my book.  I’ve read analysts who claim Poe wasn’t a horror writer.  Certainly in the modern sense that’s probably true.  Still, he, like many others, was brave enough to suggest the tenebrous side of life was worth exploring, even if you only had a candle. 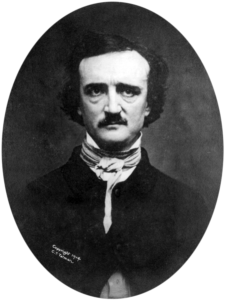 Poe’s monsters were often interior.  They were psychologically probing, and although Sigmund Freud had not yet been born, it’s not inappropriate to say that Poe explored psychology.  Writers, I suspect, often deal with things they can’t name.  This is the way knowledge moves forward, even with fiction.  Especially with fiction.  As I’m reading books by academics who’ve done well for themselves, I often reflect how their legacy will remain within their field only.  It’s the rare nonfiction writer who manages to reach a cultural status that will find readers from other disciplines.  Most of us, however, will admit to reading a novel or two now and again.  Fiction writers, such as Poe, can claim things without backing them up with footnotes and citations.  That doesn’t mean they were any less astute at observing the world than academic writers are.  Often they’re more so.

I didn’t put Poe into Nightmares to show off.  His work has long been in the public domain.  I don’t cite him to claim that he would have agreed with my use of his insights.  No, I cite him because even if he wasn’t a horror writer my early encounter with him started me on a path of exploration.  Poe had trouble getting along in a literary world where rejection was endemic (it still is, I know from personal experience) and making a living as a literary person was unheard of.  He nevertheless knew that fiction was more honest than the alternatives, at least for some of us.  If we wish to face the world with integrity, we should admit that our heroes may have been made so in our own minds.  That doesn’t make them any less authentic, just because we’ve appropriated them for our own purposes.  We borrow what we find meaningful.