One of the stories I recently read had a character commenting on the smell of a place.  Although humans can’t rival many other mammals and some birds for sense of scent, smell is a keen reminder of location.  It is also one of the more personal aspects of the senses.  We get nervous when people start talking about smells.  We all know, however, that places have their own fragrances.  Home smells a certain way.  You always notice it going home from college, where the dorms have their own smell.  When I was visiting campuses as part of my editorial expectations, I returned to Boston University School of Theology.  Apart from the main corridor of 745 Commonwealth avenue appearing smaller than I remembered, the smell was so familiar as to be overpowering.  I hadn’t been there for at least a couple of decades, but my brain remembered it well.

I trust science.  I also think science can’t explain everything, particularly in the life of emotions.  One of the natural limitations of science is the data with which we have to work.  We have limited input.  I remember in chemistry class in high school we worked with chemicals that replicated scents.  The particular ethyls used to reproduce fruit scents were similar only by suggestion.  I remember thinking the banana combination only smelled like bananas because it was suggested to me that it did.  Smell is a complex world, and we know many animals do it better than we do.  Dogs, bears, even mice, know more of the world through their noses.  I suspect Fido knows home primarily by its smellscape.  We, the “masters” tend to miss a lot.  And that makes me wonder what science might be missing by our limited sense of smell.

If there is a supernatural world, I wonder what it might smell like.  We’ve all known someone whose dog wouldn’t go into a certain room, or who reacted to something we couldn’t see.  Perhaps Fido couldn’t see anything that we couldn’t but could smell it.  I often think that when dogs are tested humans try to understand their visual acuity because that’s how we experience our world.  Dogs, however, experience their world through scent.  We could stand to learn quite a lot about this planet we inhabit if we could somehow access the smells that we simply lack the capacity to reach and analyze.  We are only beginning to scratch the surface. 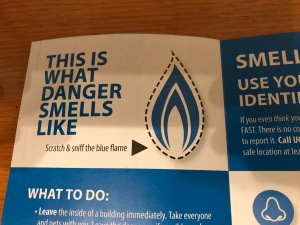 2 thoughts on “What Smells”