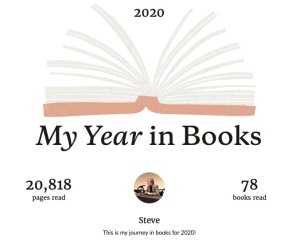 As has become traditional on this blog, I like to revisit my reading for the year before the next one begins.  No matter what else goes wrong, we have books.  As I noted yesterday, I’ll be devising my own reading challenge for the coming year and if nothing else, it’ll be diverse.  For 2020, according to Goodreads, I finished 78 books.  Since I was in the final stages of getting Nightmares with the Bible to the publisher, several books early on were about demons, and many of them were quite good.  The nonfiction that really stick out in my mind, however, includes D. W. Pasulka’s American Cosmic, Richard King’s Ahab’s Rolling Sea, Gary D. Rhodes’ The Birth of the American Horror Film, Jeffrey J. Kripal’s Secret Body, Barbara Ehrenreich’s Living with a Wild God, and Ernestine Hayes’ The Tao of Raven.  If anything ties these books together it is likely their honesty when it comes to the spiritual quest.  It can legitimately take many directions.

Fiction has, at least for much of the year, been driven by a few factors: books I have on hand during a pandemic, The Modern Mrs. Darcy’s reading challenge, and books on my reading wishlist.  That list is constantly growing and the books that stand out particularly are again diverse.  Especially memorable were Ralph Ellison’s Invisible Man, Hank Green’s An Absolutely Remarkable Thing, Han Kang’s The Vegetarian, Scott Shibuya Brown’s The Traders, Andrew Michael Hurley’s The Loney, and Silvia Moreno-Garcia’s Mexican Gothic.  Apart from their diversity these books have little in common.  I suppose that’s a testament to the importance of reading widely.  On that list there are only two “white” men but a lot of great books.

Another couple of categories might apply: big books and short story collections.  Big books intimidate me, but I read five of over 500 pages: Ellison’s Invisible Man again, Herman Melville’s Moby-Dick, Mark Twain’s The Innocents Abroad, George Eliot’s Middlemarch (my longest book for the year), and Ann Radcliffe’s The Mysteries of Udolpho.  These books are all in the “classics” category, I see.  Short story collections are more edible, and I read nine of them, including four “by” Rod Serling.  The first was an edited collection of his works, and the other three were his own Twilight Zone adaptations.  I read a few plague books because of the pandemic, but they weren’t really among my favorites.  Perhaps they were a little too close to reality.  Nevertheless 2020 was a good year of reading, overall.  I’m looking ahead to what gems 2021 might hold.