For a video introduction see https://www.youtube.com/watch?v=ZTvCq5twa8g.

“Wiggins is a first rate scholar and editor. In this long-awaited book, he offers an indispensable survey of weather imagery in the Psalter that covers everything from translation issues to paleoclimatology to what he calls ‘meteorotheology’—the theological understanding of the weather by the ancients. Throughout, Wiggins proves a central point: ‘[t]o understand the weather is somehow to glimpse the divine.’ This is a treasure trove of a book (the bibliography alone is worth the price), underscoring the never-ending complexity of the Bible, and the countless ways it moves from its ancient contexts to the present-day scientific world. I will consult it often.”—Brent Strawn, Duke University

Standard wisdom, when I was teaching, stated that a second book should be completely different from the first.  Weathering the Psalms was written when I was a professor at an Episcopal seminary in Wisconsin.  My job requirements included chapel attendance twice a day.  For those unfamiliar with the Daily Office, the Psalms feature prominently in Morning and Evening Prayer.  In fact, these offices were part of the vehicle for reciting the entire Psalter over a matter of weeks, or depending on pacing, months.

The author, blown over by the weather

While daily reciting Psalms, the weather attracted my attention.  Wisconsin experiences weather extremes—one summer we had temperatures of 106 degrees Fahrenheit.  One winter air temperatures read -42 degrees, not counting wind chill.  Severe thunderstorms, tornadoes, and intense snows were all part of business as usual.  (Since faculty and students both live on campus, classes—and more importantly, chapel—were never cancelled because of weather.) The Psalms were the running script of this decade and a half of my life.

The Psalms make reference to the weather quite a bit.  I noticed this as we read, and began to note each time it occurred.  Before long I had a notebook full of weather references from the Psalter.  This book is an exploration of what those terms mean in context. 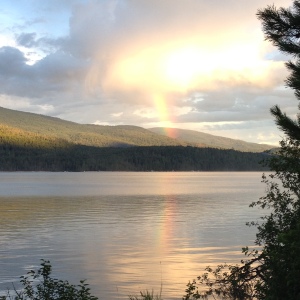 No ark in sight

Having an uncommon interest in science, I approached this book as a chapter in the discussion between religion and science.  Although a layman, I read extensively on meteorology, and I was especially cognizant of the fact that certain kinds of weather do not occur in Israel/Palestine.  Translators would use weather terms with which they were familiar, despite the fact that they simply didn’t apply to ancient Israel.  This book takes a meteorologically correct approach to look at what weather appears in the Psalter.  I consulted with professors of meteorology while writing the book.  The weather is central to human life.  What is its function in the Psalms?  Can it be an example of how religion and science address the same phenomenon differently?  To understand the weather is somehow to glimpse the divine.

I was asked to speak at Rutgers Presbyterian Church in New York City after this book came out.  One of the questions raised there, as well as by others who knew of the project, was whether it addressed global warming.  Fair question!  Had I continued on my chosen career path, subsequent studies would have taken on that subject.  As it is, this book addresses the biblical world view.  This was long before global warming became an issue.  The domestication of cattle, however, would be the start of one of the largest factors in climate change—industrial farming is by far one of the most destructive human activities on the planet.  By the time the book was published I had been a vegetarian for well over a decade.  Veganism would have to wait a couple more years, but it is probably the best way to confront global warming.  The book doesn’t address it, but I personally do, as much as possible.

This book was completed in 2005.  Over five years in the writing, I’d poured much of my effort into this sophomore project.  While revising the book, I lost my last full-time teaching position.  Making a living as an adjunct instructor, then an editor, then both, I had no time to devote to keeping the study up to date.  Over the years I talked about the book—I’d invested a lot of time in it.  I had submitted it to Oxford University Press, but it was declined on the basis of a single review.  (I later met the reviewer, who accidentally revealed himself, and we made up.)  I had begun rewriting the book in the light of that review, but the new approach (to present the Psalms chronologically) wasn’t going well and the news of my return to the job market meant it sat, untouched, on my hard drive for many years. 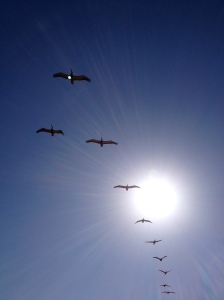 The weather in Santa Barbara is for the birds

In publishing you meet other editors.  While at a conference, I was discussing the book—publishers are always after content—in the exhibit hall when an editor from Cascade Books (an imprint of Wipf & Stock) overheard the conversation.  He found the concept interesting and invited me to submit the book.  I told him that it had to be “as was” since I had no time to revise it, and—as remains true today—no access to a university library.  Cascade Books accepted it published it in 2014.  This book is available in paperback and ebook.  It isn’t too expensive, but it is somewhat technical.  It wasn’t meant as a showcase for my writing ability; it was intended as a tenure book.

The subtitle, A Meteorotheological Survey, was intended to signal my plan to continue this kind of work into other books of the Bible.  Colleagues had indicated that, to find an academic job, I had to become more “biblical” in my publications.  To do this kind of work, however, assumes an academic library with a supportive staff, as well as colleagues in the sciences who are willing to work with you.  The topic, I still maintain, is a good one.  I have to leave it to someone who has more academic resources upon which to draw to finish the work.  My interests, in the meantime, have shifted to the way the Bible influences American society.

You thought the weather could be scary…