I believe it was C. S. Lewis who wrote that in reading autobiographies he always found the earliest years the most interesting.. In my experience the same applies to biographies; what made the person famous enough to merit a biography—auto or not—started in the innocent years. I try not to extrapolate from my own case because I never read Alice in Wonderland and Through the Looking-Glass until I was in college. (It was only in college that I first saw Mary Poppins as well.) Beloved childhood classics weren’t really part of my childhood. Like many adults, then, I wonder who was Alice, really? Everyone knows there was an Alice but what do we know of her inner life? What’s the story with Lewis Carroll?

In my mind Simon Winchester is an historian associated with large pictures. Maps of the entire world, huge volcanoes, big oceans—the meaning of everything. I only discovered his The Alice behind Wonderland by accident. As soon as I spied it I knew I’d have to read it. As I expected, the younger years are most intriguing. Those of us who cut our classical teeth under the tutelage Liddell and Scott may not realize said Liddell was the father of Alice. But it’s not the father that impresses so much as the daughter. And Charles Dodgson himself—the cast of characters is compelling even with little action beyond photography and story telling. Yet we’re riveted. What was the dynamic that led a bachelor cleric to write a world classic for children?

Who doesn’t, even in less-than-ideal circumstances, long for the carefree days of childhood? Looking at photos of our younger selves evokes a world accessible only in our heads. The world that made us who we’ve become. Winchester bases this brief study on perhaps the most controversial photograph of Alice Liddell that Charles Dodgson ever took. Even the story of wet-plate collodion photography allures the reader with its promise of stories untold. We know little of why the Liddell family grew apart from Dodgson, so much so that the adult Alice didn’t even attend the funeral of the man who’d made her an immortal. What happened here? When we find out we’ll perhaps be a step closer to finding out why becoming an adult means sacrificing a child. We may be a step closer to finding a girl known to most of the world simply as “Alice.”

Quirky ideas stimulate the intellect. I’ve always had a fondness for the outré, those ideas slightly beyond the pale of normalcy. Sometimes taken dead seriously by intelligent people, these ideas have cultural staying power. David Standish’s Hollow Earth is a cheeky tribute to those who’ve taken the idea of the underworld to literal and literary depths. Ideas that the world might be hollow have been around for some time. Not everyone, it seems, was convinced by Copernicus and Galileo. Standish traces the more modern exemplars of those who have, with stone-faced sincerity, declared that the earth is hollow. Of course, some, such as Edgar Allan Poe, were hoaxers, but they were building on those who appear to have seriously believed it. The character after whom the mythical polar entrances to the world inside is named is John Cleves Symmes. An otherwise rational fellow, it seems, Symmes decided that the earth was like a globe and that a world much like the outside awaited those intrepid enough to get to the inside. There would be light, plants, oceans—a veritable paradise found within the earth. This strange idea survived Symmes and even the exploration of the poles could not dissuade those who believed large caverns, fed by warm, arctic oceans, awaited those who would patiently explore.

Standish notes the womb-like ideals of many of these thinkers, twisting fictional accounts together with the more deluded factual kind. In popular, and not so popular, fiction the hollow earth had a particular resonance. Jules Verne and Edgar Rice Burroughs were among its most ardent fans, using the literal underworld as a setting of strange realms. Others used the hollow planet as the location of a kind of utopia, unspoiled by humanity. Unspoiled, that is, until people arrive on the scene and do what they inevitably do to paradises. It’s in the news every day. Even Alice in Wonderland gets a nod here, as she does fall an awfully long way down that rabbit hole. Fiction writers have made a boon of this bogus idea.

The most interesting, to me, character in this story is Cyrus Reed Teed. A denizen of the Burnt Over District in New York, Teed restyled himself Koresh (yes, there were others) and made the hollow earth one of the doctrines of his new religion. Distantly related to Joseph Smith, his new faith was not as successful as that of his cousin, but nevertheless, Koresh did manage to gain a following of a few hundred and establish a compound to himself where he influenced local politics to his wishes. The story has a sad ending, however, as local ruffians (including the sheriff, like in a bad western) roughed him up so badly that as an older gentleman he died perhaps as a result of his injuries. His movement fell apart and the world grew solid once again. The world really has no place for dreamers, and yes, at such times it seems to be made of very unyielding stuff indeed. 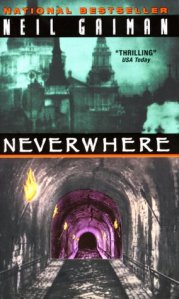 Neil Gaiman is popular among my students. At least among those that still read for fun. A couple of years back one of them lent me a copy of American Gods, and the story stayed with me. Having lived for many years in Wisconsin, and having visited the House on the Rock, the novel was like a kaleidoscope of some of my more pleasant memories of the state. Neverwhere is quite different and yet equally compelling. Gaiman peoples his worlds with characters just on the edge of believability thrown in with protagonists who tend to be completely confused by what they’re experiencing. Instead of gods, in Neverwhere there is an angel with the unlikely name of Islington and we have the myth of Lucifer’s fall retold in fantasy format, rolled together with Alice in Wonderland and the myth of Theseus. For starters.

A person is a composite of what s/he reads and learns and accepts. The books we digest, each in a unique recipe fitting our individual tastes, create new compounds and concepts that explore our personal realities. Neverwhere takes the reader down a rat-hole instead of a rabbit-hole, but nevertheless follows a young girl on a journey of maturity. The hero’s quest is undertaken to actualize both protagonist and idol, and along the way the beast in the labyrinth must be encountered and slain. Theseus, the flawed hero, dominates a world where even saviors have peccadilloes.

The protagonist of Neverwhere does not believe in angels, despite his encounter with one. As Gaiman puts it: “it was much easier not to believe in something when it was not actually looking directly at you and saying your name.” Belief generally involves not seeing. Once the object of belief is empirically confirmed, belief becomes knowledge. Today the belief in angels remains unabated. No empirical proof, nothing tangible confirms this belief beyond the anecdotal accounts of those who claim to have experienced them. Even the fanciful image of their androgynous good looks and unlikely wings remain untainted for all the centuries. Neverwhere raises an intelligent question about angels, but to discover what it is you’ll need to go down the rat-hole as well.

Last night I finally got around to seeing Alice in Wonderland, the Tim Burton version. As a child I don’t recall having seen the overly optimistic Disney original, and I only read Lewis Carroll’s two-part, disturbing original after I had finished my undergraduate degree. When I first discovered Wonderland I was in one of my periodic phases of questioning reality and Carroll’s provocative prose and ingenious lyric ability only made the inquiry more complex. Strangely, it felt as if I had rediscovered a missing piece of my own childhood.

Burton’s versions of childhood stories would likely have been my preferred fare had they been available when I was young. Eerie without the overt horror of an R rating, the vision is one of a world where uncertainty reigns supreme. Then came the hookah-smoking caterpillar. It has been a few years since I’ve read the book, but I don’t recall the larval character as having a name. Linda Woolverton, the screenwriter, presumably gave him the name Absalom. Supposing this to be nothing more than the reassignment of a fated biblical name associated with failed attempts at kingship, I simply let the reference pass. Until the chrysalis scene. There he was, Absalom hanging from a plant, just like David’s son swayed from a tree according to 2 Samuel. This mysterious scene in the battle of Ephraim Forest had captured my attention before when I wrote an article on Absalom, eventually published in the Journal of Northwest Semitic Languages.

Noticing the strange phrase that Absalom was suspended between heaven and earth, I suspected that this might be a reflex of the ancient morning star (Venus) myth. The story of Athtar, the god who would be king but who must decline the throne, is a brief tale preserved in the Ugaritic Baal Cycle. As I watched the sage caterpillar giving wise advice to a confused Alice, the name Absalom took on new significance for me. I have no way of knowing if the reference was intentional or not, but in a culture deeply suffused by the Bible it would appear to be a logical guess. And if I was correct in my article, I was seeing a cinematographic reference to Athtar as a blue caterpillar last night. Wonderland indeed.