One thing we all have in common is mothers.  Whether it’s the mysteries of biology or something more spiritual than that, the connection lasts forever.  The thought occurred to me yesterday as we visited Columcille, one of those places that reflects a vision for a piece of land that transforms the ordinary into sacred.  Columcille Megalith Park is inspired by the standing stones of Celtic lands.  Open to the public for a suggested donation, the park consists of a stone circle and several menhirs (megaliths) arranged along paths through the woods.  Recognized by the Nature Conservancy as a sacred space and outdoor sanctuary, it draws thousands of visitors of all faiths with both recreational and religious rationales.  Throughout the park we found evidence of spiritual interaction with nature left on or near the stones.  But what has this to do with mothers? 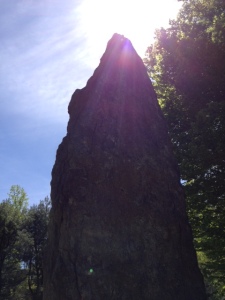 One of the areas in the park is the Sacred Women’s Site.  As we lingered there yesterday, I reflected on the sacred nature of all women, and mothers.  That’s not to suggest that motherhood is for all women, but rather that our society has been slow to catch up with the idea that women show us the way.  Men have “had charge” for millennia now and look at where we are; cooperative ventures and peacekeeping efforts crumble as world leaders encourage the resurgence of exceptionalism.  We’d rather have an inveterate liar lead the nation than a politically able woman.  Britain wants to pick up its marbles and let the European Union disintegrate.  We seem to have forgotten that just a century ago a world war ended.  We need sacred spaces like Columcille.  We need to remember the sacred women.

One takeaway from our brief visit was that although there was also a grove for sacred men, that of the women was more peaceful.  The idea of standing stones making a site sacred goes back at least to the Bible.  Stone circles are found from ancient Israel to the far-flung Orkney Islands of Scotland.  Standing among them, whether modern like Columcille or ancient like the Ring of Brodgar, or yes, the more famous Stonehenge, there is a sense of sacred purpose.  Miles from Stonehenge stands Avebury, a town built around another stone circle.  There the megaliths were divided between female and male stones, with both required to make the ring complete.  Such places require a tremendous amount of work.  When they’re constructed, however, they give us places to think of mothers and the mystery of life.

Stonehenge may be the best known stone circle in the world, but it is by no means the only one. Not too many miles from its more famous cousin lies Avebury, a village that is built on the site of an ancient stone circle and henge. Far to the north, in the Orkney Islands the impressive Ring of Brodgar stands sentinel over Stromness on Mainland. My students were sometimes surprised to learn that the Middle East also has its ancient stone circles. Some speculate that the town of Gilgal in the Hebrew Bible derived its name from such a circle. In the 1920s a series of large stone circles were discovered in what is now the kingdom of Jordan, and these circles are back in the news as archaeologists try to decipher the purpose of these huge rings. Unlike their European relatives, the Jordanian circles are only a few feet high, but they are about 400 meters in diameter. Eleven are known. Clearly not high enough to pen animals, the circles remain a mystery even today.

Most ancient circles have uncertain functions. We don’t really know what they were for, but considering the tremendous amount of labor involved at such sites as Stonehenge and Avebury, clearly they were considered extremely important. Likely religious. Circles, of course, are an embodiment of mystery—they have no beginning or ending. Even pi, a necessary figure in circular calculations, seems to be an infinitely non-repeating decimal value. Adding to the questions of the Jordanian circles is the lack of a decisive date. They seem to be a couple of millennia old at least, perhaps significantly older.

Like the lines on the plains of Nazca in Peru, the significance of the circles can only be fully appreciated from the air. People have long left drawings for the gods, it seems. Circles, however, suggest a kind of utility as well as just a pleasing shape. One of the problems of archaeology, however, is that it can’t always tell us why people built unconventional structures. Archaeologists are sometimes left guessing just as much as the rest of us. The stone circles of antiquity are, in their way, humbling feats for us to ponder. If they were religious features of the landscape, their construction in an the neolithic period points to a significance beyond the level of the great medieval cathedrals of Europe. It seems no wonder, then, that religion has been with us ever since, despite its frequently announced demise. What are the Jordanian circles? Religion often steps in to explain what reason cannot. Given what we know, this guess may be the best solution.

There’s a hole in the bottom of the sea, if we are to believe childhood songs. News reports this past week, however, have suggested that just the opposite applies to the Sea of Galilee. According to Science on NBC, a huge stone structure, larger than Stonehenge, rests at the bottom of the lake over which Jesus reputedly walked at the height of a storm. To the untrained eye, this stone pile looks like just that—a stone pile. The problem is that there is no natural source for the mound, and it seems highly unlikely that it was built under the water. This astonishing find is only one of the many underwater structures known that seem to defy conventional chronologies and logical behaviors. If this gigantic cairn was built on land, the means remain a problem. It is one thing to climb a conventional pyramid, complete with ramps and sledges, and quite another to mount a mound of apparently random stones to drop another on top. Perhaps it was built under water after all, like one of those tantalizing toys where you try to land your penny in the cup at the bottom of a tank of water. 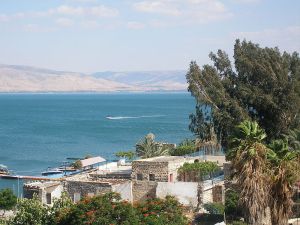 Pacman’s Sea of Galilee from Wikimedia

Ancient monuments are one of the great fascinations of antiquity. When no rational explanation is forthcoming, a religious one will be declared. Without written records, we know nothing of the real purpose of Stonehenge or Avebury, let alone Galilee-henge. With the pyramids of Egypt we have a better set of data, and we can feel justified calling them religious structures. But why were ancient people building massive rock mounds in what was to become the Sea of Galilee? The place has irrevocable religious associations to the modern mind. Did it possess such connections in the deep pre-Israelite period as well? The false mountain of Silbury Hill, not far from Stonehenge, comes to mind. People are mountain makers.

Cairns have been among the most persistent of human monuments, but what makes this new finding of interest is its location. Baptized in the very lake that holds the headwaters of River Jordan, the mysterious mound has already claimed its sanctity. Who built it, why and when, will take backseat to the fact of its holy location. Archaeologists will eventually dive and probe and will declare an anthropologically sound explanation for this newly found, artificial, miniature mountain. Mountains and gods go together, however, as readily as offering plates and churches. Whatever this newly discovered structure may turn out to be, it will always be a religious site for those who believe.