An article by Matti Friedman in this month’s Smithsonian got me to thinking about the Bible’s iconic status again.  Titled “An Archaeological Dig Reignites the Debate Over the Old Testament’s Historical Accuracy,” the story’s about a decidedly non-biblical trope—King Solomon’s mines.  That phrase, as the article makes clear, comes from the title of H. Rider Haggard’s nineteenth-century novel, not the Bible.  As the piece demonstrates, however, many people suppose it to be biblical.  Our society isn’t as biblically literate as it is biblically motivated, so the question of proof keeps coming up.  It’s almost as if historical veracity is far more important than any spiritual truths the Good Book may be attempting to establish.  Those who need the assurance of history (those we tend to think of as literalists) often miss the message in the quest for certainty.

Reading the article makes it clear that archaeologists have discovered good evidence for copper mining in the Arabah.  This is in no way surprising.  Ancient people of biblical times smelted copper and used it to make bronze.  At issue here is the historicity of Solomon’s opulent kingdom, evidence for which we lack.  Archaeologists have been digging for well over a century now, and the magnificence of David and Solomon doesn’t really show up in the archaeological record.  Of course the issue is politicized because land claims are involved.  American literalists tend to support Israel because of its role in “end times prophecy.”  Eager to be done with this wicked old world, they require the assurance of history.  Interestingly enough, that doesn’t seem to have bothered Jesus of Nazareth very much.

Long ago biblical scholars realized that the biblical view of history isn’t the same as what we might term scientific history.  Any history, as those who specialize in it know, isn’t “what really happened.”  Objectivity is impossible.  Histories are versions of what likely might’ve happened, based on the sources consulted.  At the very least there will be the perspective of the other side.  There are facts, of course.  The Holocaust, for example, did happen.  The fascist government of Germany orchestrated and implemented it.  When trying to reconstruct that history, however, differences of opinion often arise.  That’s the nature of history.  Unfortunately we’ve seen the rise of these self-same biblicists denying the known facts of more recent history in order to make themselves appear more righteous.  They want to shield themselves from the genocide of American Indians and the evils of slavery.  Yet they are inspired by such headlines that hint that the Bible might have a tint of historical accuracy after all.  It’s all there in the passage about King Solomon’s mines.

Every now and again the Chronicle of Higher Education dips its trowel into the biblical archaeology debate. Those of us who’ve made extensive arguments based on ancient texts and artifacts know the territory a little too well. Archaeology, which largely grew out of biblical scholars attempting to “prove the Bible,” eventually started on its own track of scientific respectability with the predictable result of distancing itself from the Bible occurred. So far, so good. Then biblical criticism took a turn towards post-modern sensibilities. The truth cannot be known, and therefore the safest approach is to stop seeking any truth at all. Archaeologists in the know joined this venture (biblical scholars and archaeologists often cross borders in this exotic land), and began to deny historical Israel, as well as the rightly dismissed historical Abraham and Moses. Once you’ve walked a few leagues down that path, however, it is difficult to turn back. This is, of course, an over-simplified account of a complex dynamic, but the issues raised, as seen in the Chronicle, are real. Our perspective flavors our interpretation. If you don’t believe in a historical Israel you’ll never find one, no matter how hard you look. (A similar dynamic is at work in studies of religions and “paranormal” phenomena.) The word “evidence” is finessed as readily as fine hair treatments and the kinds of evidence that convince vary depending on the scholar. It is safest to admit we don’t know, sometimes. 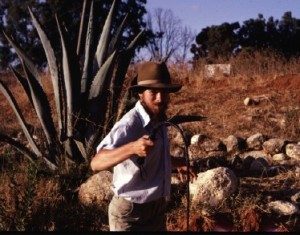 The more troubling aspect, as far as I’m concerned, comes when the Chronicle introduces the concept of corporate sponsorship to archaeological digs. As an erstwhile volunteer on a dig (somewhere back in the Iron Age, it feels like now), I know that archaeology is frightfully expensive. There’s nothing like being on a dig to witness firsthand the amount of labor that goes into removing all that dirt–carefully! Carefully! Universities can’t afford it (stadiums don’t come cheap, you know!), so many digs rely on corporate donors–often television and film companies. And if you’re paying for footage, you want something to bring in watchers. An unnamed archaeologist quipped honestly in the Chronicle, “I don’t agree with everything they say in the films, but they pay me an awful lot more than I could ever earn from writing or teaching.” There it is, staring us straight in the face. The truth goes to the highest bidder.

That may sound benign enough, but in Israel especially, archaeology has high political stakes. You see, politicians are easily swayed by the “we were here first” argument. To get an idea of its specious nature, just ask a Native American! Proving the veracity of a David or Solomon no longer just gets God off the hook, it also builds the basis for claims against people who’ve been here an incredibly long time. The sad reality is that in archaeology, as in higher education, money speaks with an inordinately loud voice. As an agreed means of exchange, money is certainly important, but is it “true”? For those who’ve stopped short of the post-modern abandonment of that great philosophical ideal of Truth, we should be wary of allowing lucre to decide the issue. Those with money already help to decide what courses will be taught and what tels will be excavated. We run a real risk when we let those same people decide what will be considered the truth. In a society enamored of media and its ease of use, the truth is sometimes what comes across the television. There is another way, but it involves heavy digging and lots of reading. Maybe next time—but for now just pass the remote.

In an article full of rare academic tropes and staid paronomasia, MSNBC announced yesterday, through LiveScience, that what appears to be an ancient “sex toy” has been found in Sweden. The object, of uncertain utility, is made of antler and dates to the Mesolithic era in that region. What has surprised the archaeologists is that the artifact apparently represents a male, rather than the more usual female, image. Two common ambiguities of antiquity come together in such a find: the sacredness with which the ancients seems to have held reproduction, and the fact that the way you look at an artifact is certain to express interpretations in line with the assessor’s.

Scholars of religion have long had to roll their eyes as archaeologists, particularly in Israel and “biblical” regions, unearth artifacts of uncertain function. Not knowing what this item might be, it is common for a find to be labeled as “religious.” This is perhaps a larger issue in “biblical” regions since so many archaeologist, particularly the influential ones of late last century, began their careers as biblical scholars or potential clergy. In the days when academic career mobility still actually existed, they could easily make the jump to archaeology, caring all their biblical baggage with them. Efforts to bolster the historicity of the Bible provide a special impetus to see objects as religious. Their actual function remains lost to history.

Even scholars see what they wish to see. It is a form of pareidolia, the finding of significance in what might otherwise be random noise. Is the Stone Age Swedish antler really a phallus or not? It is unlikely that the answer will ever be known. The context is ambiguous and the object itself is open to interpretation. Modern humans, with our own issues about sexuality, are inclined to snap suggestive objects right into that pattern. Even the specialists admit that maybe it is an object to knap flint, a common use of bone and antler material in ancient times. Or maybe it was intended as a thank you to the gods. Its interpretation may depend on which way you look at it.

Each semester I introduce my Hebrew Bible students to the dangers of “biblical archaeology.” Not that there is any wrong-headedness in excavating sites of importance to ancient Israel, but I warn them of requiring proof for religious beliefs. Early archaeologists digging in the lands of the Bible were open about their agendas — “proving” the Bible to be “true.” The problem is proof is certain only in mathematics, not in matters of faith. Truth cannot be known, but must be believed. When archaeologists excavate the unknown, they cannot know in advance what they might find.

As a young academic wannabe, I volunteered at Tel Dor in the summer of 1987. Before the introductory orientation sessions Dor was only a shadow of a reference to one of King Solomon’s administrative cities mentioned in 1 Kings; I knew nothing of its location or importance. I’d had enough of seminary to be skeptical of many truth claims even then, and the irreverent outlook of many of my fellow diggers underscored the secular nature of the venture. We were digging for the truth, but we might not recognize it when we found it. Apart from the scorpions and tarantulas, we unearthed many mute trinkets from Israelites silenced by time. My square team was assigned to the city gate; we were seeking the coveted fourth chamber to place the city in a Solomonic context.

To the best of my knowledge, our humble efforts did not prove the Bible was true. After manually hauling out tons of dirt, we found what appeared to be a gate chamber and perhaps even a rubbish heap. Of these two features the rubbish heap was the more interesting to me. Here it was that the cast-offs of ancient life had been consigned to oblivion only to be rescued by bewildered strangers far in the future. Truth is often in what we hide. It may not be glamorous or worthy of biblical paeans, but it is that part of our lives that we discard. Finding “Solomon’s” gate proved nothing, but what “his” people threw away contained nuggets of the truth.