News stories this year have plowed up a frequently repeated question: what’s an Evangelical? This was the subtext to a Washington Post story that declared “Half of evangelicals support Israel because they believe it is important for fulfilling end-times prophecy,” as if it’s news. The media’s a little shy, I get it. Those of us who grew up Evangelical could have told them that at least 40 years ago. As a child I knew that Israel had to be fully restored for Jesus to return. Politics, we thought, were holding God hostage. You see, if the Bible says something, and it’s infallible, then even the Almighty has to obey it. And some parts seem to indicate that Israel has to be restored—interpreted a certain way—before Jesus gets his invitation back. 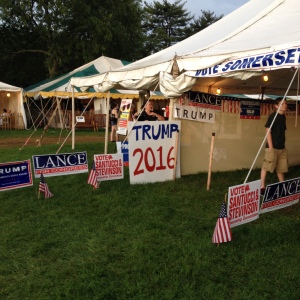 This Evangelical support isn’t because they love the Jews. No, no. Let’s not get personal about this. It’s because the second coming isn’t coming until the pieces are laid out in order. The Bible’s like a crystal ball, only it’s holy. It can predict the future with great precision. You can be sure someone like Trump is in there someplace, maybe in the passage where an ass speaks. In the 1970s it was Nixon. The wonderful thing about prophecy is that it’s made with interchangeable parts. As Millenniarians know, if you get your year wrong never apologize. Simply recalculate and keep preaching as if nothing happened. The Almighty is a forgiving God. At least to those He likes.

Intellectuals seem to think Evangelicalism is contagious. Well, to be fair, historically it has been. That was the whole point of camp meetings. Most Evangelicals aren’t too shy to tell you what they believe. In fact, their reading of the Bible sort of insists that they do. If you’re too bashful, many of those in the academy (or even formerly so) started out in their ranks. Rare is the biblical scholar who decided on that field of study purely based on intellectual curiosity. There was likely a method to their madness. Yes, of course Evangelicals support any politician who moves the embassy to Jerusalem. Tis a consummation devoutly to be wished. The divine heels have been dragging for a couple of millennia now, so it’s time to get this show on the road. All you have to do is ask an Evangelical. They’re not hard to find; in fact, they seem to be everywhere these days.

I sign a lot of petitions. That’s because the job of prophet doesn’t pay well enough to support a family any more. What it does mean is that I get a lot of emails from causes looking for supporters. I don’t sign blindly. That was brought home to me the other day when I had an email from the “White House.” A more obvious effort at trying to scramble for table scraps of respectability I cannot imagine. Already since January our government has swooped to new lows of deception and now false news comes right to your inbox. This email informed me that Neil Gorsuch has overwhelming bipartisan support for his Supreme Court nomination. Being an individual with a working brain, I know that’s not true. The “White House” wanted me to sign a petition supporting Gorsuch when I’ve already signed several protesting his candidacy. It’s clear that our government wants a court prophet.

Isn’t it odd, I mused, that a government that has no intention of listening to the majority is sending a petition to support one of its own? We know that the Russian Party (formerly known as the GOP) will support anything Thurston Howell the President hands them. Such a petition is only a way of saying “I told you so.” I miss the days when Isaiah could walk right into king Hezekiah’s bedroom and say “Thus saith the Lord…” These days the Lord tweets and the chirplings in the nest beg for more worms. You see, court prophets know which side their palms are crossed on. This isn’t Ash Wednesday, it’s Ash Administration.

Court prophets, in ancient times, were those paid by the government to support what the king wanted to do. It was a cushy job. What the reigning Trump wants at the moment he or she (for the modern court prophet can double-cross her own gender) proclaims it as God’s will. No experience necessary. The thing about the Bible, though, is that court prophets are pretty roundly condemned. The real prophet could generally be told by the fact that he (less commonly she in those days) was dead. Or soon to be. Those in power seldom care for criticism. Especially when skeletons are fighting each other for elbow room in their closets. Even so, Holy Writ says, figuratively, that it’s better to be a living politician than a dead prophet. If that doesn’t sound biblical, read the words of the prophet: “Nevertheless the sun hides not Virginia’s Dismal Swamp… and break the green damp mould with unfathomably wondrous Solomon.”

Punxsutawney Phil phled his shadow this morning, leaving many despairing another six weeks of winter, which meteorology seems to dictate anyway. I used to tell my students that Phil is a most peculiar prophet, in that he is, presumably, neither Christian nor Jew, but rather of the rodent religion (whatever that may be). People pretend the little guy has powers beyond those of the average mammal when it comes to predicting vast, chaotic systems. If a groundhog flaps his eyelids in Pennsylvania, prepare for plows and shovels and more thermal underwear. Playing into this annual phenomenon is the provocative persistence of the idea that prophecy is prediction. As much as scholars attempt to expunge the idea that foretelling wasn’t what prophets were ever really about, the populace likely wouldn’t have paid them any attention, had the possibility not presented itself that these preachers knew something the rest of people didn’t.

Prophecy is a strange phenomenon. We claim that we would like to know the future, but I’m not sure that we really would. Knowing that we’ve set ourselves on many tracks that inevitably lead to tears, do we really want to know? After taking my daughter back to college, we sat in a fast-food place to grab a bite on the way home. It had been snowing again, as it will do in the winter, and the television in the corner was blaring on about another apocalyptic band of snow. A bearded and burly Pennsylvanian at the next table turned to me, attracted, I supposed by my own facial hair, and said, “What about this global warming?” I nodded politely, not being very burly myself, but I thought of the fact that global warming does mean more severe winters in some places and warmer conditions in others. It is marked, scientists predict, by erratic weather, not a constant sauna in those regions accustomed to snow.

Although a Pennsylvanian by birth, I have noticed that my ancestral New Jersey does not receive much snow. Until this year. We’ve had the white stuff on the ground for over two weeks in a row. Yes, it snows in winter, but not usually here. I shiver and think of global warming. It is a chilling thought. Punxsutawney Phil may live far enough inland not to have to worry about learning to swim, but the same can’t be said of the inhabitants of most of the major cities of this country. We know it is coming, but we turn a blind eye. Progress in the name of unbridled big business interests brighten a future otherwise a bit more gloomy than we might prefer. Phil ducks back into his burrow and the rest of us clutch our coats a little tighter around us. Prophecy is a mixed blessing indeed. We already know the outcome before the groundhog awakes. 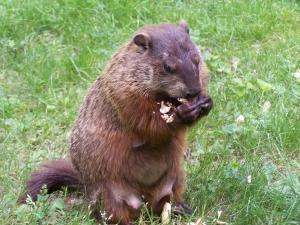 An agnostic groundhog ponders the inevitable (photo credit: I. EIC)

At the suggestion of a friend, I watched The Mothman Prophecies last night. Very loosely an updated version of the collapse of the Silver Bridge in Point Pleasant, West Virginia, the movie both satisfied my monster movie habit and my interest in things biblical. As a monster flick, it was satisfying in maintaining tension, never clearly showing the creature. As a representation of prophecy, it falls into the camp of Nostradamus.

Reports of the “mothman” began in 1966 and continued over the next year. It was reputedly seen near the Silver Bridge, the artery that connects Point Pleasant with Gallipolis, Ohio. After the tragic collapse of the bridge, resulting in nearly 50 deaths, the paranormal prophet was never seen in the area again. While in West Virginia last year, a friend introduced me to a couple from Point Pleasant who stopped into her store. They looked a little embarrassed when the mothman came up in conversation.

Prophecy, in the vernacular, refers to predicting the future. Although some biblical prophets correctly intimate future happenings, mostly the image of prophets in the Bible is that of effective speakers. Prophets are individuals who participate in the reality of the world by adding their powerful words to the mix. If their words regard a future event – fairly rare in the Bible – they affect the outcome because their words have influence in the world. It is a supernatural view of the spoken (or written) word, to be sure, but it is a long cry from predictive ability. It is a matter of perspective.

Interestingly in the movie, Alexander Leek, the specialist on mothmen (apparently there are many), suggests that they see farther because they are higher in the sky than humans. In other words, it is indeed a matter of perspective. Certainly the mothman must go down as one of the oddest cryptids sighted. I give them no credence as prophets, but I will think twice before driving over bridges from now on.