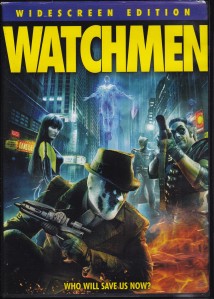 When the local Blockbuster went belly-up a few months back, I was one of the vultures picking the bones. With new DVDs continually creeping up in cost, I look for bargains wherever they might exist. Occasionally I find something for just a couple of dollars that really makes me think. Although I don’t go to theaters often, a couple of years back the previews all featured The Watchmen. I’m not a graphic novel reader either, so it was doubly doubtful that I would ever gravitate to this film. But here it was on sale. Very cheap. The previews had shown Dark Knight-like action and despite my own declarations, I had to admit that I was curious. So I’ve watched it a couple of times and have been intrigued by what an (absentee) role God plays in the movie.

I won’t go into much detail since the story is complex and, to my surprise, sophisticated. Nevertheless, the Watchmen – retired crime-fighters both good and bad – forced out of practice by the government, fear the approach of nuclear war and try to fight back. At several junctures characters declare that there is no God or that they believe there is no God. The setting is an alternate reality in the 1980s, but the crossover between that world and this is evident. Godless heroes may save the day, but with a tremendous human sacrifice required. At first viewing, I was stunned. The message was so bleak and hopeful. The movie could have been made with no mention of God, yet, briefly, his absence was underscored. Strangely, the Bible features in a bedroom scene where a future hero is spending the night with his girlfriend. Why the Bible? Why here?

I would be the first to admit that I do not have the proper background to comprehend the plot. Generally I like to read the book before I see the movie. One of the recurring motifs in the movie version is the doomsday clock that moves dangerously close to atomic war. On top of the Bible is the hero’s watch, ticking inexorably down to midnight. Even I can figure out that the countdown to doomsday is based on the Bible. What the import of this is, however, I can only guess. What kind of world has no God but still has Bibles? A world where Watchmen aren’t wanted and yet are sorely needed. Who will save us now?