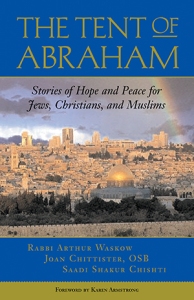 Among the many things that have happened during the pandemic to fill my time, I was invited to join a virtual book discussion group.  While the idea of reading groups has always appealed to me, there’s always the matter of who gets to choose the book.  I’m well aware from both what I post here on this blog and from my Goodreads account, that my reading tastes are eccentric.  I’m also very aware of how little time life really encompasses and I try to make it count.  Work takes up much of it, and beyond that biological necessities such as sleep, and household chores also weigh in.  All of which is to say I didn’t choose The Tent of Abraham to read.  It chose me.

The subtitle—Stories of Hope and Peace for Jews, Christians, and Muslims—pretty much describes what the book is.  Authored and edited by Joan Chittister, Murshid Saadi Shakur Chishti, and Arthur Waskow, the book focuses on the story of Abraham that ties the three monotheistic traditions together.  It is an exercise in creative exegesis, and sometimes eisegesis.  Given the point of the book, eisegesis is okay here, perhaps even necessary.  The reason for much war and hatred is the credulous, literal belief in our founding myths.  Abraham isn’t an historically attested character.  The stories told about him in ancient religious texts differ.  And although he doesn’t always come across sympathetically, he is always seen as a friend of God.  We’re not ever given a satisfying reason for that friendship, it just is.  Abraham is kind of a scary guy, as some of these stories make clear.  He’s not above abandoning his lover and child in the wilderness.  Nor attempting to murder his only remaining son.  Or passing his wife off as his sister to save his own skin.

Interspersed with these tales of imagination and horror, are scriptural versions (and by scriptural I mean biblical and those from the Quran and Hadiths), as well as real life stories of death in the Middle East conflict.  These are difficult stories to read.  Much of the violence between faiths comes down to conflicting claims of ownership.  As the book makes clear, if people resolve to celebrate difference rather than to distrust the other we can all live together in peace.  The only thing lacking to make this happen is the will.  Unfortunately, the conflict draws its energy from religious beliefs, or, more precisely, politics using religion to get its ends.  And for that one doesn’t have to travel all the way to the Middle East.

I’ve been reading an ebook and I feel lost.  I resorted to the ebook because I was invited to join an informal virtual bookclub.  Book discussion group may be a more accurate description.  Since I don’t see many people this seemed like a good idea.  Although I often take recommendations, reading a book someone else chose is kind of an infringement on my already crowded “to read” list, but connection is connection.  The problem was I couldn’t get a physical copy of the book delivered before the first meeting.  I struggled with whether or not to buy the ebook for hours.  I just can’t get over the feeling that I’m paying for something that can disappear at the next upgrade and all my effort in reading it will have been lost.  I’m a book keeper.  (Not a bookkeeper.)

After a morning of angst, I finally clicked on “buy.”  I’ve been reading the book but I’m finding it disorienting.  When I read an actual book, I quite often take a look at the physical object and assess it as I’m reading.  Appraise it.  Who is the author again?  Who published it?  When?  In the ebook world that information is obviously available, but it’s not where I expect to find it.  And there’s the matter of pages.  I measure my progress of book reading by the location of my physical bookmarks.  I can tell at a glance to the top of the book how my progress is.  A slider bar just doesn’t do it.  I click out of it and check on Amazon.  How many pages does this book actually have?  Why does my e-version have a different number?  Won’t that confuse the discussion?

I don’t feel so guilty about marking up an ebook, I’m finding.  Highlighting in a print book always annoys me—I don’t want some previous owner telling me what I should remember.  This ebook won’t get passed on to anyone else (that’s the genius of the business model—the ebook isn’t available for resale, which more durable, actual books are).  As I’m doing this I recollect that I’ve only ever read two ebooks before, both fiction.  They didn’t make much of an impact because it was only in writing this post that I remembered them at all.  The world of the coronavirus has taken its toll, I guess.  I’m reading an ebook and I can’t wait to finish so I can get my hands on the real thing again.