Long before the Walking Dead, and even before Twilight or Buffy the Vampire Slayer, people took the undead seriously. Now, I know ratings are important (they attract advertisers and their money, after all), but when the fear is reality the stakes are upped a bit. Two readers sent me a Guardian story this past week of Yorkshire villagers mutilating the dead. In the Middle Ages, that is—it’s perfectly safe to die in Yorkshire now. The story by Maev Kennedy describes how archaeologists have been studying deliberately defiled corpses, well, actually the bones from those corpses to be precise, to solve a centuries-old mystery. Their conclusion? Medieval folk really did fear the dead coming back from the grave. 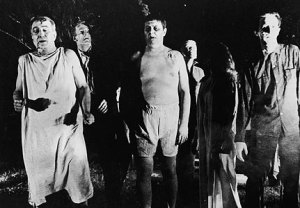 Now, Easter’s just around the corner and resurrection’s on a lot of minds. Outside the context of the Bible, however, resurrection of the dead is one of the most ancient and persistent of human fears. Nobody’s quite sure why. Dreams and visions of the recently departed are extremely common. Belief in ghosts is ancient and fairly universal. The destruction of the bodies of people already dead is not. We treat our gathered ones with respect. To me it seems to come down to the puzzle of consciousness. Call it a soul if you like, but I have a feeling things would be getting rather crowded in here if too many distinct entities claimed this body as home. Mind, soul, spirit, psyche, consciousness. We don’t know what it is because it can’t be studied empirically. We know that something like it exists and opinions of what happens to it after death vary. The body, we can all agree, has a more prosaic end.

That’s what makes fear of the undead so fascinating. They are only bodies. Bodies without souls. Rather like leaders of the Republican Party. We fear them because when we look into their unblinking eyes we see no vestige of human warmth or sympathy. Those who walk among us and who don’t care about those of us not yet undead remain a perennial fear. In the case of the Yorkshire corpses these were people already buried. Putting them back in their graves seemed kind of pointless when they would only climb out again. We don’t know what it was like on the ground in the Middle Ages. History, however, has an ironic way of repeating itself. We’re entering a new age when I suspect we’ll want to make sure the remains of some remain well and truly gone once they’ve finally given up the ghost.

Perhaps it is a perverted sign of the times, but sometimes I seek myself online. Not surprisingly, most of what I find there is stuff I’ve posted myself. Then my daughter suggested that I search “wiggins” in the Urban Dictionary. For people my age, the Urban Dictionary is often handier than Merriam-Webster for reading online lingo. I’d never tried to find myself there before, however. It turns out that “wiggins” is defined as “The state of being uncomfortable or freaked out… an uneasy feeling; a sense of foreboding badness.” Speaking strictly for me, this is a spot-on definition. Other Wigginses would likely take exception, but this connotation fits me like a thumbscrew. Perhaps our names make us who we are. The Dictionary also cites the source of this slang; Joss Whedon (who also gave us The Avengers) apparently coined this term on Buffy the Vampire Slayer. (His name, by the way, is defined as, “To kill off the most lovable b-list characters in your movies.”)

Naming, in ancient times, held a distinctly religious significance. Ever notice how many biblical characters were renamed by God? Even today the Catholic Church recognizes renaming after a saint as part of a person’s identity at certain crucial junctures in life. Indeed, in western culture “Christian name” equates to the more secular “given name.” Names define us.

I’ve done a fair amount of genealogical research. The actual etymological origins of the name Wiggins are obscure, but likely have to do with living in a valley. More exciting prospects trace the name back to early English forms that look like the word for “Viking,” and the name does seem to originate from the vicinity of York, where Vikings were not unknown. Still, the more prosaic, the more likely.

When my mother remarried, I took on my step-father’s surname. It didn’t sit well. When I read Arthur Miller’s The Crucible in seminary, John Proctor’s words leapt out at me: “Because it is my name! Because I cannot have another in my life! Because I lie and sign myself to lies! Because I am not worth the dust on the feet of them that hang! How may I live without my name? I have given you my soul; leave me my name!” When I later went to court in Massachusetts to reclaim, legally, my birth-name of Wiggins, I had that quote written on a paper in my pocket. We are our names. Slang has, in my case anyway, provided the most reasonable definition of my surname. And only courts, as I know from experience, have the authority to change this pre-decided declaration of who we are.