The newly opened World Trade Center memorial in Manhattan is truly a solemn place. Staring into the seemingly endless holes into which the water forever pours, one feels the emptiness of loss like a thousand graveyards. Like watching the Titanic sink from a lifeboat. In the chilly late October morning hundreds were huddled about, looking at those reflecting pools with an undefined sadness in their eyes and a sense of frustration in their souls. So much loss. And for what? The American way of life has its towering foibles as well as its nobility. The protesters of Occupy Wall Street are mere blocks away in Zuccotti Park, reminding the nation that we have forgotten the principles of human decency even while we honor the fallen dead. It seems an appropriate epitaph for All Hallows Eve—a peaceful park where hundreds died just blocks from where hundreds camp in the cold. It is not too late to stop this ship from striking the iceberg.

The symbol of peace, given to us by the Bible, is the olive branch. Actually the olive branch comes from the story of the flood; it is less a sign of peace than it is a sign that some of us have survived the wrath of God. Read into that what you will. The olive branch only comes after all but eight people pay the ultimate sacrifice. It is peace on the terms of a vengeful deity. Near the center of the memorial, one tree stands out. It is not an olive tree. After the devastating attacks of 9/11, workers found a living Calleri pear tree among the rubble. The scorched and battered plant was taken to a nursery where it recovered. It stands now in the midst of the peaceful reflecting pools, bearing not olives, but pears. The tree was saved by human effort, a symbol of peace, survival, and endurance. 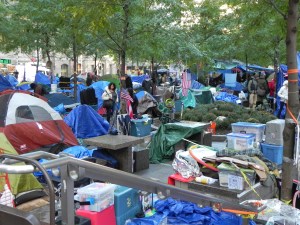 A different kind of tower

I spoke with one of the protestors in Occupy Wall Street, and gave him encouragement. I suffered unemployment for long years when the weight of the flood crushed me to my own ocean floor. Loss and more loss. I was moved to tears in the World Trade Center memorial. The decision not to build again on the site where the Twin Towers stood is a symbolic statement to those who believe that evil triumphs in the end. The god of those who destroy others in the name of their faith is the god who destroys innocent and guilty alike in worldwide floods. This is a god who offers people with no knowledge tempting fruit that they are not permitted to eat. Nowhere in the Bible does it state the species of the tree of knowledge. Is there anyone left innocent enough to tell? Artists like to use an apple, an idea based on the similarity between the Latin words for evil and apple. I believe that loss of innocence was the price of maturity, and I believe the tree of knowledge might just have been a Calleri pear.