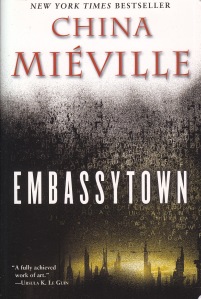 Traduttore, traditore—“translators are traitors”—is an Italian saying invested with a great deal of truth. Anyone who’s worked with the proliferation of languages in the world knows the truth of the adage. What is said in one language can’t be stated precisely in another language with all the depth and texture of the original. China Miéville’s Embassytown is a sprawling novel that addresses the question of how cultures evolved on widely separated world can ever understand one another. I can’t possibly go into a detailed summary of the story—it took me about 30 pages to begin to understand what was going on—but the book drew me in nevertheless and left me happy to have expanded my conceptual world.

The reason that I’m bringing this novel up in a forum where religion lurks in the background is that Miéville explicitly brings religion into his story. It may be impossible to explain precisely how he does this without the detailed summary that I’ve already begged off giving, but it is nevertheless noteworthy that in any sufficiently complex world religion emerges. We tend to think that religion is something that evolved from the slime and now that we’ve bathed in the light of pure reason it will eventually be washed into the gutter of discarded concepts. History demonstrates repeatedly that such is not the case. Religion is resilient and, dare I say it, inevitable. Human beings—perhaps also other conscious beings—know that there is something outside ourselves. That’s the foot in the door for higher beings or forces or worlds. In a word, religions.

Fiction writers frequently appeal to religions for verisimilitude. Are imaginary worlds believable without religions? It’s a long stretch. Star Wars has characters calling belief in the force a religion. Star Trek, in any number of episodes, dealt with gods. Anathem was based on the monastic ideal. Science fiction has trouble when it leaves religion completely out of the picture. A non-deistic universe is nearly incomprehensible to the human mind. Even great scientists and other rationalists occasionally lapse into thoughts about luck, fate, or fortune. Embassytown doesn’t focus on religion throughout, of course. It may be a minor subplot. But translating an alien world with a language that can’t be understood into a fiction of English is facilitated by putting a religion into the general mix. This is a smart and complex world, but when you read it you’ll find it believable because a religion naturally emerges. And that, I say, is realism.

Imagine, if you will, life on the open sea. Back in the whaling days. Days before enlightenment really took hold. Transpose that thought onto railroads. In a day of huge moles and other underground creatures. Days when no one can imagine where the rails end. That might give you the slightest glimpse of China Miéville’s Railsea. I haven’t read too much of Miéville’s fiction, but I have read enough to know to expect a reality distorting romp through very interesting places. In this take on Herman Melville’s Moby Dick, Miéville takes some noteworthy risks in providing his characters with a native religion. Fiction authors sometimes find religion a constraining topic. Consider Salman Rushdie. More often the restraint appears to be a lack of imagination on the writer’s part—although we can’t define religion very well, we all know what it is and what it’s supposed to look like. Miéville, although in backstory, provides a new religious world where the gods are called Stonefaces and everybody believes in angels, and the explanation of where the railways came from is “theology.” Even our erstwhile Captain Ahab is chasing after her “philosophy” in the form of a giant mole that seems to have taken her arm.

With a sensitivity I’ve rarely found (the fault could well be entirely mine), Miéville utilizes religion, particularly Christianity, to construct an alternate universe. The gospel therefore appears as godsquabble, and to suggest there is anything beyond the sea of rails is literally heresy. Our protagonist Shamus ap Soorap on his voyage of discovery ends up riding to heaven on the rails only to find that there is yet even more beyond. Although religion itself is not central to the story its adjuncts are, creating an entire mythos of life on the railroad. It this world it is clear that wood and trees are related, but no one quite knows how; some suppose an evil god planted false evidence to deceive them. There’s even a healthy dose of the Odyssey thrown in, with the Medes having to pass through a mountain dwelling monster, the siller, and the Kribbis Hole.

But aren’t we really on the ark once more? For surely the bedeviled Pequod was a shadow of the same. In Miéville’s fantasy world, the open ground unpopulated by islands is dangerous. All kinds of innocuous creatures burrow out and will eat the traveler who is not safely ensconced on a train. As if to underscore the Noahic connection, Sham ends up on an actual boat on an actual endless sea. I’m pretty sure Homer never read Genesis, but the parallels between Greek mythology and the Hebrew Bible were long ago recognized by Cyrus Gordon and his colleagues. Miéville continues the tradition. Stranded on an island, Sham tries walking on the rails (read walking on the water and you’ll get the picture) until his faith fades. There are many who declare that religion has outlived its usefulness, but if an author can bring Melville, Homer, and the Bible into an intensely creative story, I think I’ll have to beg to differ.

I just finished China Miéville’s novel King Rat. I’ve been thinking a lot about rats lately. This retelling of the tale of the Pied Piper of Hamelin has a strong Marxist flavor that intrigues the reader into greater possibilities. Each week as I drive the many miles required as a professional adjunct, I think about the bourgeoisie of academia. Many university programs are simply not possible without the many adjuncts willing to be exploited in order to keep them going. While the adjunct is kept below a certain number of courses so that costly benefits do not need to be paid, full-time faculty are kept below a certain number of courses so that they are free to build the university superstructure. Some teach no courses, do no research, and conduct no administration. It is a fair guess whether they even bother to breathe or not. Yet they are paid full salaries and benefits. Academic fossils paid simply to exist.

Saul, the rat-man who would be king, has a conscience. He was raised by his human father to appreciate the sense of what Karl Marx wrote. As the novel progresses, the rats congregate around him, wanting him to be their king. I have been an adjunct instructor for five years now. As I have watched my prospects grow slimmer, my work load has increased for less and less payback. I frequently chat with full-time colleagues who appreciate everything I’m doing. This academic year I am scheduled to teach eleven courses, strictly part-time, of course. Otherwise someone might have to pay benefits. This week one of the schools I teach at actually expanded parking privileges for adjuncts. Not to be nice, but because they had to.

Saul, the would-be king. So biblical. So human. At the end of the story he lives up to his idealism, granting rats autonomy without being sure how it will play out in the real world. There was a time when academics were idealists. Universities are now, like all other aspects of “modern life,” businesses. I’m sure that full-time instructors devote very little thought to those who work for table-scraps to support the system that underwrites their comfortable lifestyles. Certainly a university president or dean would loose nary a wink of sleep over those who’ve given themselves over to the task of Atlas, holding up their sky. It is business as usual. And as the bourgeoisie know, every aspect of life is business. What happens when the rats go free? The end of the story has not yet been written.