Back in the days when I was still young enough to dream, but old enough not to change anything, I wanted to become a geologist. I was near the end of my teaching stint at Nashotah House at the time, and my life-long interest in fossils fired up like a liquid oxygen barbeque. My interest began in paleontology, since I’ve always loved dinosaurs, and grew to encompass all kinds of rocks and minerals. Geology promotes a literal groundedness that few other areas of study can rival – it embraces the stuff of the earth itself. Moving halfway across the continent with boxes full of rocks, however, dampens the rock-hounding ardor a bit. I still read about geology: it is the discipline that pounded the final, resounding nail into the coffin of the six-day creation myth. While still living in Wisconsin my family used to drive out to the mountainous north of Idaho across, among others, the vast state of Montana. It was geology in motion. 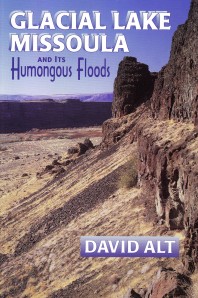 My in-laws soon learned of my geology bug, and I was pleasantly surprised with a book on the great flood two Christmases ago. Not the great flood of Noah, but that of J Harden Bretz. David Alt’s Glacial Lake Missoula and Its Humongous Floods provides an introduction to a series of great catastrophic floods in the western United States. Not that anyone remembers them; the last of the deluges drained into the Pacific about 13,000 years ago. What connects these floods to this blog is the reception history of this idea. When geologist J Harden Bretz discovered the unmistakable evidence for the floods in the landscape of Montana, Idaho, and Washington, geologists refused to accept it. The reason? Catastrophism was unacceptable to geologists of the turn of the twentieth century. Although Alt does not come right out and say it, clearly one reason that uniformitarianism prevailed was because of Noah’s flood.

Ironically, geologists had been forced into a conceptual stalemate because of a biblical myth. The story of Noah’s flood had been (still is, by some) used to explain everything from the Grand Canyon to the extinction of our beloved dinosaurs. In response, geologists posited a long, slow, gradual process behind the sculpting of the earth’s surface. By the day of Bretz, nothing moved fast in geology, not even floods. It required many decades for the science to recover from the stigma of biblical catastrophism. Today geologists largely acknowledge that at several points during the Ice Ages (yes, they did happen!), an ice dam flooded what would now be recognized as Missoula, Montana, under a gigantic lake. That lake burst its ice dam repeatedly and gushed down toward the Columbia River and out into the ocean long, long ago. Long before the putative Noahic flood of some 4000 years ago. The landscape it left behind is impressive to both geologists and biblical scholars. And the story of this flood’s rediscovery demonstrates once again the continuing influence of Noah on otherwise rational minds.