We live not far from an upscale mall. This mall, although over 30 miles from Manhattan, has its own bus line dedicated to it by New Jersey Transit. There is a route that runs throughout the day from the City to this mall and back. My readers know I’m hardly an uptown type. Nevertheless, an occasional trip to the mall can be a learning experience. On a cold weekend where outdoor activities felt unnecessarily ascetic we went to stroll around to see what was new. In the midst of the usual stores I never visit, there was one that had the temporary feel of an exploratory venture in high rent retail. It was, for lack of an appropriate adjective, a “New Age” store, featuring figurines from eastern religions, incense, dragons, and the aesthetic of the hippie mystique. Wandering about, I couldn’t help but notice how much of the merchandise, in one way or another, was religious in orientation.

Those of us from the western hemisphere find the quotidian aspects of Hinduism and Buddhism exotic. Otherworldly, even. In our sterile offices, we dare not burn incense. Fabrics this colorful are not worn to work. It was as if the only place true color exists is in that mystical world that religions acknowledge, but businesses deny. Yes, it was a Saturday, but nevertheless the number of patrons surprised me. The town in which the mall sits is quite affluent. We live far enough from the City that some very serious money resides at no great distance. Patrons tend to have enough, and considerable surplus. And here they are, in a store selling that is undifferentiated spirituality. A stand of silver jewelry was explicitly marked Wicca. There were even Christian figurines among the crystals. 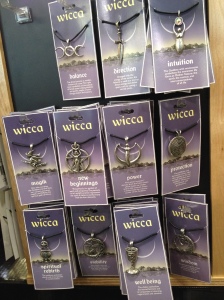 People, even (or perhaps especially) the wealthy, desire more than the dollar can bring. We’re authoritatively told that we are meat computers. Mere automatons to the forces of physics. Our human experience tells us otherwise. We are meaning-seeking creatures. There are people who will willingly sit for three hours on a bus just to reach this mall. Whether it is a hippie-friendly shop, or the latest fashion trends that draw them here, they have this in common: they’re seeking something. I glance around and spy a mirror. I came here looking for a place out of the cold, but I have discovered an unexpected insight. If we make our own, or purchase it prefabricated, we venture to our secular cathedrals to find a kind of salvation.

“Losing my religion,” I learned some time ago, means “going crazy” in some regions. It was that REM song that made me look it up. Losing My Religion, by William Lobdell, is much more literal. Having a hunger for spiritual memoirs, even if they end up with non-belief, has become an avocation for me. Growing up religious and having paid a pretty steep price for it throughout my career, I feel a bit like I’ve just risen from the analyst’s couch after a particularly helpful session. Here are people baring their innermost selves, trying to make sense out of a world that doesn’t add up. So it was for Lobdell. Since he was a religion reporter for the Los Angeles Times, his is the compelling story of a specialist who’s seen through the veil. His honesty is disarming. When I read such memoirs the question in the back of my mind is always, “what did it?” What pushed a believer over the edge?

By far the majority of these confessions I’ve read are those of women. Since religions have historically treated women poorly, it stands to reason that they might have second thoughts about what they’re being saved from. Lobdell, on the other hand, narrates what brought him to Christianity in the first place, and what forced him to conclude that it was wrong. Going the well-worn path from evangelical to mainstream Protestant to Catholic, he was seeking greater depth at each stage. Then theodicy. Theodicy is a god-killer. No matter how we frame it, there is no acceptable reason for good people to suffer needlessly. Out primate brains simply reject it. That’s not to say that for some faith can’t overcome such persistent doubts. It’s always a struggle, however, and, as Lobdell points out, not everyone is capable of believing what their mind tells them makes no sense.

One thing that stands out from all the spiritual memoirs I’ve read is how religion has such a difficult time explaining suffering. I suppose here’s where eastern religions generally have a stronger starting point. By acknowledging that life is suffering, they ask what we can do about it. Western religions, which often extol the good life, run into problems when theodicy hits. It’s almost as if the concepts can’t keep up with the realities of day-to-day life. Religions are often part of the culture you inherit, being born where and when you are. They also reflect belief structures from the age in which they emerged and those structures evolve over time. Today’s Christianity shares ancient concepts with the first century, but also modern sensibilities about psychology, culture, and philosophy. It can be a difficult mix, not least because it’s artificial and synthetic. As Lobdell notes, he isn’t alone in all this. It is, I might suggest, one of the reasons that studying religion is so important, even for those who do not believe.

Every great once in a while, you read an academic book that really makes you think. Not that many books aren’t erudite or thought-provoking, but the ones that cause a reader to question reality are relatively few. I suppose that’s why I’ve been reading Jeffrey Kripal’s books like candy. I’ve posted on his Authors of the Impossible and Mutants and Mystics. Now that I’ve read Esalen: America and the Religion of No Religion, I somehow feel like I missed out on something important that had never entered my awareness. Growing up in the eastern part of the country and not reaching my teenage years until the program at Esalen was already under way and famous on the west coast, I’d never even heard of the institute until I’d started reading Kripal’s books. Esalen, for those who are like I was, is hard to define. Indeed, Kripal studiously avoids doing just that as he narrates its history and impact on the nation, and indeed, the world.

The human potential movement has seldom found institutional support. Since our worldviews determine what we are capable of seeing, and since our reality has largely been defined by a rationalistic monism, an entire universe remains for us to discover, if we were only to open our eyes. Reading about Esalen was like finding a long lost twin—much of what the institution has stood for has found its way into my own psyche in some form or other. I suppose I’ve never really read too much on eastern religions, but I do appreciate what meditation can do. Reading the names of those associated with Esalen over the decades, it would be difficult to disagree.

Our society has come to trust materialism assiduously. How easy it is to forget that even the material world consists of so much more than our limited senses reveal. We know that animals sense the world differently, so we call them non-conscious beings and get on with pretending that if we can’t see it, it doesn’t exist. As the Esalen devotees know, even scientists have come to consider the implications of quantum mechanics. If we are to take the results of physics seriously, the impossible does happen. Right here in our own corner (or arc) of the universe. We lose so much by refusing to believe the impossible. Lewis Carroll knew that and we’ve been talking about going down the rabbit hole ever since. There are rare places in the world where the spiritual, the scientific, the sensuous, and the artistic come together to explore what the human experience truly is. One such place is Esalen, where, I’m told, the religion is no religion.

It may be a little too early for winter, but scary movie season has begun in my personal calendar. This weekend I watched Wind Chill. Although critics weren’t always kind to the movie, and the ending is somewhat predictable, it is one of the more decidedly creepy films I’ve seen recently. Since it is set in Pennsylvania there was a bit of a homey touch to the terror. I have driven on similar roads to that in the movie, during snowstorms, and that is one of life’s true terrors. What makes the movie so frightening is its ambiguity. Put a teenage girl alone with a guy in a car on an isolated road and you’ve already got enough elements to make your spine tingle. It becomes clear that the guy hasn’t been honest with the girl all along (the characters are never given names in the movie) and as they spend the night in the broken-down car reality and nightmare become increasingly difficult to parse. Of course, religion plays a role in the show.

The guy is giving the girl a ride home for the holiday break. He’s been watching her, a little too closely, for some time although she doesn’t know that until it’s too late to turn back. As they fumble for conversation it turns out that he is an “Eastern Religions” major and they met in a philosophy class. This just keeps getting scarier and scarier! After they break down (spoiler alert!) and the ghosts start showing up, we learn that some of them are priests. They had come to this haunted road to give the last rites to some accident victims before freezing to death in the poorly insulated cells in a strange little monastery on the hill (this is Pennsylvania, remember). As the night wears on we find the priests condemning the bad cop to a fiery death before light dawns and the girl finally finds salvation.

Of course, this is a variation of the old urban legend of the teenage couple out parking when something scary happens. Having everything in half-light and through smeary, foggy windows makes it more difficult to perceive what is actually going on. A lying religion major, priests complicit in a deserved fatality accident, and Nietzsche’s eternal recurrence give the film a little intellectual heft among the muted special effects and bleary-eyed confusion as the night goes on. Morality is on trial here. Although not the most profound of films, Wind Chill deserves some credit for bringing religion and horror to the same remote location and having them trade cards in the dark of night.