One of my nieces works on the 10,000-year clock (aka Clock of the Long Now). I’ve written about the project before—the object is to build a clock that will run a myriad of years. For comparison, 10,000 years ago we were only beginning to tamper with this concept we call civilization. Clocks have been my muse this week. Monumental clocks have long fascinated people. The Engle Clock, in the National Watch and Clock Museum, was completed about 1878. In those days, these large clocks (it literally weighs half a ton) toured the country as technological marvels—something that fails to impress, I suppose, in an iWatch age. Nevertheless, this is a clock with all the whistles and bells—literally. Figures come marching out at various fractions of the hour, culminating with a skeletal death chiming the end of each sixty minutes. The figures are both secular and sacred, a mix that the people of the days just after the Civil War no doubt appreciated. 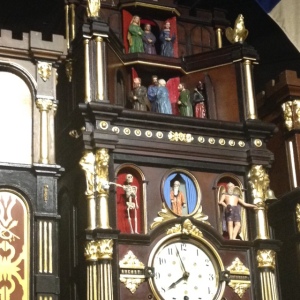 At the top of the clock, at quarter to the hour, Jesus appears. Doors above him open and the “three Marys,” including, of course, his mother, come out. Meanwhile the twelve disciples process in front of their Lord, each respectfully turning toward him. The devil appears, shifting from window to window, and one disciple does not turn to greet Jesus. This is Peter who instead turns his back, and immediately, to borrow a Gospel trope, the cock above their heads crows. Finally, as the apostolic procession winds down, the Devil appears last in line. It is all quite elaborate. The clock took Stephen Engle two decades to build—time he would never recover. The religious message, I suspect, was taken much more seriously then than it is now. After all, the clock is a museum piece.

Throughout the museum, references to Christianity abound. Not only Galileo, but many Medieval time-watchers saw God literally in the face of time. Clocks were embossed with religious figures. Hours were kept to remind the faithful to pray. The time, as the New Testament insists, was short. Ironically, we still build monumental clocks. Some are based on the 9-billionth of a second vibration period of cesium, while others are made to last ten millennia. We have secularized time. Now its purpose is mainly to tell us when to go to work. When to wake up to go to work. And when we might eventually leave work. I might enjoy building clocks myself. The fact is, however, I don’t have that kind of time.