As someone who eschews easy labels, I’m always conflicted when someone asks what my doctorate is “in.”  Universities have departments, of course, and different academic fields have differing standards of what qualifies you as an expert.  My Ph.D. was mainly in the field of history of religions, but focused (all such project must be narrow) on what is best called ancient West Asian cultures.  Recently someone showed me a website with free geography quizzes on it.  (I post the link here with the caveat that this can be very addictive.)  This friend asked me how good my Asian geography was.  I knew that once I got east of Iran I was going to be in trouble.  Some countries, such as Russia, India, China, and Japan are hard to miss, but the others I was properly humbled over.

I tried the quiz again and again until I could point to any of the official Asian nations with a fair degree of accuracy.  Eurasia is a very large landmass, and when you consider that it is, apart from human-made canals, attached to Africa this is a lot of space to label.  Considering that many isolationist politicians can’t correctly find smaller countries on a map without an app, I started to realize just how lopsided the world is.  Many more people live in Asia than populate the “New World.”  They actually have more space than we do here, but much of it is too cold or too dry for comfortable living.  Still, I considered that if I’d had this quiz as a kid I might’ve known my geography much better than I do.

As I’m preparing to attend the American Academy of Religion and Society of Biblical Literature Annual Meeting in a few days, I recall priding myself at knowing all fifty states of my native country.  I’ve been to all but five of the lower 48—Alabama, Kansas, Oklahoma, New Mexico, and Nevada have eluded me (the conference never meets in them and I don’t have friends who’ll put me up for free in them).  But at least I know where I haven’t been.

After trying my hand at Asia on the app, I attempted Africa.  Let’s just say I still have a lot left to learn.  And unlike when I was a kid, I look forward to taking quizzes.  Work interferes with web time, though, and learning modern countries isn’t the same as knowing where Hatti or Elam used to be.  Religion, after all, forms borders just as impermeable as mountains, oceans, or deserts. 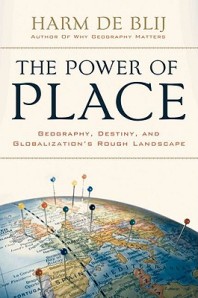 The world is flat—not.  Harm de Blij’s The Power of Place: Geography, Destiny, and Globalization’s Rough Landscape is, despite the author’s hope of improvement, a sobering read.  Geography is one of those subjects that studies show Americans consistently failing.  But de Blij begins and ends with one of my favorite themes: that place defines a person.  One of the realities with which all humans must reckon is that we have no control over where we’re born.  As de Blij demonstrates, not fatalistically, that place will determine to a great extent what life has to offer us.  Chances are that most of you reading this were born in what social geographers call “the core.”  The core is that affluent part of the globe that encompasses successful states with relatively good prospects for their citizens.  It is, numerically, the smaller part of the world’s population and it is the base of claims for the world’s flatness—that is, its apparent sameness across borders.  De Blij, who has crossed one or two of those borders, knows that there is a roughness inherent in this world, and those outside the core pay the highest price.

Among the many factors de Blij examines one—religion as an accident of birth—comes up repeatedly.  Religions quickly complicate efforts at fairness and equal distribution with various theologies of why the poor are poor and that we can justify leaving them that way.  Or worse, a religion may decide, since it alone is right, that those believing otherwise ought to be destroyed.  Internecine as well as international rancor is a commonplace of the news as religions compete for the alpha male spot on the human (actually man-made, gender distinction intended) hierarchy.  The religion you’re born into, for most of the world’s population, is the correct one.  Missionaries, by definition, disagree.  Theirs is the true correct religion and even if it doesn’t improve the lot in life of the poverty-stricken, it will at least make for a better afterlife, cold comfort though it may be.

One issue that de Blij touches upon only minimally is the sacredness of place.  Of course, that is often the ground for conflict, but in smaller ways we often feel an attachment to the place we enter the world.  Beyond visiting the relatives still near my hometown, sometimes I just want to go there and linger, pondering what this world intended for such as me.  The distress I feel when I see that the hospital where I was born has been closed down, the houses in which I grew up razed, and even my first school remodeled, touches something deep and undefinable.  It is a small part of who I am that has been erased, the silencing of the clock’s ticking.  Those rough hills were my home for the two most formative decades of my time on earth and I belong to them.  I owe them who I am.  This is the mystery of sacred geography.  The refinery fires, the childhood friendships, the Christian bookstore that propelled me in a direction I may alter but not eradicate.  It’s not rational, I know.  But like many animals, I feel the draw, and de Blij points out the many benefits and frightening realities that attend it.