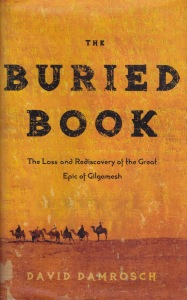 What relevance could the Gilgamesh Epic possible hold for contemporary people? Well, one of my colleagues has said that every book is now about Trump. While I resist such thinking, he has a point. Even in reading David Damrosch’s The Buried Book: The Loss and Rediscovery of the Great Epic of Gilgamesh it’s hard to avoid making comparisons. The famous epic is about a bully king who is eventually humbled by the gods. That should make the contemporary association clear enough. Damrosch’s book, however, is actually about how one of the world’s classics—if not the first classic—was lost to the human race and rediscovered only in the nineteenth century. The cast of characters involved in finding the text is colorful and tragic, rather like the epic itself.

Hormuzd Rassam, associate of some of the largest names in Assyriology, was a native Iraqi whose role in the recovery of antiquity was overlooked in his lifetime. Although Rassam did much of the actual finding he was unfortunate enough not to have been born English. While Sir Henry Creswicke Rawlinson and Sir Austen Henry Layard, and even the irrepressible George Smith, gleaned fame over the rediscovery of the glories of ancient Iraq, the very model of a modern Middle Easterner simply didn’t receive his fair share. Rassam wrote books that were essentially ignored. The moving tale of his treatment makes this already gripping story poignant. The Epic, however, not only became world famous—it forced scholars to reevaluate how to interpret the Bible. Although not the earliest flood story, already in the mid-1800s it was recognized that the flood myth in Gilgamesh had more than just a passing influence on grand old Noah.

One of the stories behind the preservation of Gilgamesh is that of Ashurbanipal, the Assyrian emperor. Ashurbanipal believed that to be a world leader one had to be well read. He was the most powerful man in the world in his time. The idea of government is useless without the corrective of history. That doesn’t mean people should only look backward, but those who refuse to look back at all are doomed to make mistakes that go all the way back to the Bronze Age and before. In fact, Stone Age mistakes can (as we are living to see) be repeated even in a nuclear age. That’s part of the charm of Gilgamesh. Reading the classics serves a higher purpose than might be obvious at first.

This podcast deals with the myth of the great flood. It begins with a consideration of why modern expeditions do not find anything (nothing to be found), and considers the reasons the story is so appealing to present-day readers. The Sun Pictures productions on the flood story are reviewed, along with the story of the hoax played on Sun in their 1992 made-for-television movie. The history of the flood story is briefly narrated, beginning with George Smith’s 1872 discovery of the Mesopotamian flood story, back to Atrahasis and the Eridu Genesis from Sumer. The flood story is one of the earliest religious stories known.