One might be excused for thinking so much about the Devil these days. Displays of lies and evil intentions are on pretty obvious display at the highest levels. Indeed, the current political situation has me reassessing my skepticism about the Antichrist. One of the truly well thought out books on the subject is Jeffrey Burton Russell’s classic, The Devil: Perceptions of Evil from Antiquity to Primitive Christianity. The first in a series of books Russell wrote on the topic, The Devil opens with evil. Noting that the Devil defies easy definition, Russell begins rather disturbingly with literary descriptions of acts that can only be described as evil. This allows him to point out that real life events often surpass those that authors can get us to read, intimating that something is seriously wrong with the world.

Having noted that, the emergence of the Devil is not an easy one to trace. Evil has been recognized in many cultures and it has been explained in many ways. Some have personified it, but even that took a long and circuitous route to the dark lord we know today. Bits of Greek philosophy and Zoroastrian cosmology combine with an emerging monotheism among the Israelites and their kin until eventually we have an embodiment of evil appearing. Even so, the Bible has no clear image of who “the Devil” is. This took further developments beyond the New Testament and the image that eventually won out, so to speak, borrowed heavily from classical mythology. Eventually Old Scratch emerges in a recognizable form.

Belief in the Devil still runs high in American culture. I suspect it will run even more so in months to come. At the end of Russell’s well researched study, the Devil comes down to the blatant disregard for the suffering of others. One might think of the mocking of the disabled or the favoring of the wealthy over the poor. Evil may be known by many names but it is easily recognized by those not caught up in its worship. This became clear in the biblical quotations sprinkled throughout the book. “Woe unto them that call evil good, and good evil,” for example. Or “when an ungodly man curses Satan, he curses his own soul.” Mirrors may serve multiple purposes. The vain look into them and see only beauty. Those who believe in the Devil can’t help but know who it is that stares back.

As far as we can tell, historically there is no Saint Valentine that is particularly connected to February 14. Even if there were, it is difficult to imagine a saint promoting what we know as love. Love is a slippery topic. The ancient Greeks (who did not marry for love) were so perplexed that they came up with three different words for it, and the nascent Christian community tended to prefer agape-type love. Love that expresses well-being for the community and has little to do with the physical attraction that people everywhere find so compelling. It is safe to say that Christianity has always been uncomfortable with the kind of love that Valentines Day celebrates. The holiday, because of its associations, has often been removed from the liturgical calendar a time or two. People are already prone to express their biological urges, so it is best not to give them an excuse, sanctioned by the church.

This is an odd situation, thinking love is wrong, or at best, tolerated. As far as we can tell, the earliest Christians had no particular concerns in this way. We can’t measure, of course, how people loved their spouses, but there was nothing inherent in the new religion to suggest physical attraction was bad. By the time Paul of Tarsus started writing his letters a couple of decades after Jesus’ life, at the earliest, some doubts had crept in. They seem to have been largely personal. We know little of Paul’s life, but we are aware that he saw the kind of love known as eros to be a problem. Concession had to be made to those who couldn’t control themselves, but otherwise, in good stoic fashion, love was to be ignored. By the time of Augustine of Hippo, some three centuries later, sex passed on original sin and love had become decidedly dark.

Attitudes change with time, of course. After two millennia a certain practicality sets in. We have moved through the troubadours and courtly love to psychology and deep human needs. Arranged marriages are, for the most part, considered like shackles from the past. And love, that feeling that we never completely outgrow, is believed to be a positive thing. Saint Valentine (and there were at least two of them) would likely have disagreed. While the Romans celebrated sexuality, they also believed in restraint most of the time. Valentines Day, however, still has something to teach us. Despite the commercialization of the holiday, in a world with a surplus of hatred, any kind of love is, as long as it’s mutual, is worth celebrating.

Growing up in a teetotaling family, when I first encountered Greek mythology I paid scant attention to Dionysus. Assuming him to be “just the god of wine,” I had no interest in the wares he was peddling. Of mythology itself there was no end of fascination, and many of the great classics have been toned down to Disney, or even more insipid, for the entertainment of children. What we often fail to appreciate is that this is religion. Mythology that does not address the very real human concerns of sex, intoxication, and false dealing is really of no help at all. If in doubt, read your Bible. (Not the children’s version.) When I came back to Greek mythology as an adult, it became clear that Dionysus differed from other gods in considerable ways. While teaching my mythology classes, I decided to read more about this intriguing god. Well, it was just like the Fates that I would get a new job before reading Walter Otto’s book, Dionysus, but the urge was still strong and I was glad I’d read it.

Otto wrote in the days of Frazer’s technique of comparing sometimes questionable sources, and yet he produced a masterful, and poetic study of Dionysus. What quickly becomes clear is that the popular association of Bacchus with wine is a gross oversimplification. Dionysus is the god of madness, of blurring distinctions, and of losing control. He is the most frequently represented god in Greek art because, like us, he sometimes loses it. Greek society is famed for its rationality and order. It is sometimes overlooked by the reasoning mind that creativity, emotion, wildness are part of the complexity of humanity. Dionysus is the god who understands the need to let go once in a while. This is not hedonism, nor is it debased. Bacchus represents the human in full form. He is the god who comes to humanity, the god of appearing. Dionysus, the friendly god.

In the early days of Christianity in the Greek world, many Greeks supposed that the Jesus preached to them was Dionysus (to the chagrin of many missionaries). The connections, however, are remarkable. Like Jesus Dionysus has a god for a father and a human for a mother. He lives a carefree life and is the god who actually comes down to live with people. He is a god who dies and who is resurrected. Like Jesus, he enjoyed a glass of Bordeaux every now and again. And his followers were fanatical. As Otto makes clear in his dated, but insightful, book, Dionysus left a deep imprint on culture itself that continues to affect us even today. Even if we’re teetotalers, we can appreciate the depth of character and the complex nature of a god like Bacchus. And if we’re honest we’ll admit that there are times when we just have to let it go.

Once again the headlines tell the story of a child molested by a “celibate” priest now suing the church as an adult. That money dropped in the collection plate goes to cover the cost of sin. The disclosures continue to find the light of day not only in the Catholic Church, but across the religious organizational spectrum. It is an extremely unfortunate situation, but I can’t help wonder if religions are naturally susceptible to sexual expression.

Sexuality and religion go back a very long way. I have suggested elsewhere on this blog that some of the earliest evidence for religion, all the way back to the Paleolithic era, is sexual in nature. One of the blatant aspects of our own cultural conditioning is that we can no longer see the connection. We inhabit a post-Victorian world, a world that strenuously repressed sexuality and removed it from the sphere of human discourse. One of my favorite examples of this is when the standard classical Hebrew-English dictionary (Brown-Driver-Briggs, for those of you who need to know!) makes reference to sexual activity in the Bible (and it is abundant), the editors delicately slip from English to Latin, so as not to offend the sensibilities of clerics and other gentleman-scholars reading the entry. This antipathy to the human condition can be traced even further back to the Greeks who felt that the physical body was much more base than the spiritual, or intellectual aspect. Sexuality was a source of embarrassment and perhaps even shame.

I’m not a psychologist, but it is pretty clear what occurs when strong feelings and drives are repressed for a long time. The early Christians who believed Jesus’ second coming to be imminent did not wish to be caught in flagrante delicto. Sexuality was to be avoided since time was short. When this became formalized and priests, probably very decent people overall, were forced to relinquish their sexuality, it was assumed that it would simply evaporate into the ether and harm no one. We have known for decades that this is naively wishful thinking. As the margarine commercial used to say, “it’s not nice to fool Mother Nature!”

Ancient sects were not sexually depraved. Stephanie Budin (The Myth of Sacred Prostitution in Antiquity, Cambridge, 2008) has done a good job showing that the case for sacred prostitution in the ancient world has been grossly overblown. Nevertheless, sexuality had a natural place in ancient religions. Any number of nervously giggling teenagers who’ve just discovered the Song of Songs in the Bible know that! The problem arises when our religious culture refuses to acknowledge the obvious. We bottle it up and try to keep it hidden, but when it finally appears the price tag is very steep indeed. 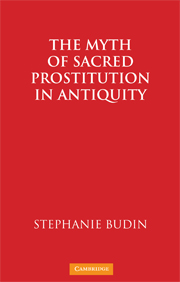