Staring at the mysterious green blob of Hanny’s Voorwerp, it’s hard not to imagine being Captain Kirk sitting cantilevered forward in that famous chair on the bridge of the Enterprise. Even for those of us who are not Trekkies, the giant space nebula looms between galaxies where no one expected stars to be born. Their own private intergalactic nursery. With my mind already on Star Trek, I think of the web-page sent to me by one of my winter term students at Rutgers: the Memory-Alpha Bible page. Since my loyalty to Star Trek only reaches as far as the occasional viewing of an episode for light relief – and only from the original series at that – I had no idea that the Memory-Alpha wiki had bloomed into existence like Hanny’s Voorwerp itself. This wiki dedicated to everything Star Trek has 32-and-a-half-thousand pages on every angle of creator Gene Roddenberry’s unintentional universe.

The Bible page’s first paragraph (accessed 1/12/11, sometime around 7 a.m. EDT) reads: “The Bible is a collection of ancient Earth writings usually bound together as a book. The Christian Bible is divided into the Old and New Testaments; however, other translations and versions exist and vary by faith groups. It is among these faith groups that the Bible is considered a sacred text, which is generally viewed as having been inspired by one of the Human gods.” Someone takes his/her future, wiki-writing persona very seriously. Nevertheless, it is a perspective that could be helpful in handling a Bible that has grown politically powerful without being understood here in the paltry twenty-first century.

The page also lists all of the episodes where the Bible is referenced or alluded to in Star Trek. As my student pointed out, almost all of these references (in the original series) are to the Hebrew Bible, with very few being from the Christian Scriptures. This makes sense, given the context of the 1960s when McCarthy’s aroma still hung heavily in the air and the war in Vietnam was daily in the newspapers. To offer up television fare that might have been considered “unchristian” in any way was a faux pas in such tortured times. The Hebrew Bible is great for providing allusions to paradise and apocalypse, but the words of Jesus were taken with a solemnity far too great to allow for fictional space explorers’ banter. So maybe it’s just an accident of astronomy that the amorphous, green cloud of Hanny’s Voorwerp appears to be wearing a galactic halo. 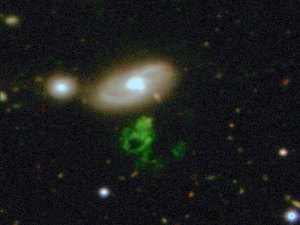