The thing about the unknown is that it’s, well, unknown.  Like many people I’m interested in getting at the truth behind ghost claims, so American Hauntings: The True Stories behind Hollywood’s Scariest Movies—from The Exorcist to The Conjuring, by Robert E. Bartholomew and Joe Nickell looked helpful.  Indeed, it is.  To a degree.  The book, however, devolves at points to debunking cases that aren’t in the movies and frequently asks “Why didn’t somebody take a picture?”  (In cases where there are pictures they say how they could be faked.)  Given the authors, you kind of know none of the claims will be accepted.  Even so, there’s a lot of good information here.  They do a great job of outlining the very probable hoax at Amityville.  For some of the lesser known cases they offer explanations harder to believe than the poltergeists they so abhor.

That’s the thing: for all the “hauntings” they default to poltergeists and then explain how poltergeists are faked.  They begin with An American Haunting, and move on to The Exorcist, Poltergeist, The Conjuring, The Amityville Horror, and The Haunting in Connecticut.  Sandwiched in there is also the non-movie Don Decker case.  What struck me as strange is they often seem offended that movies embellish stories.  That’s what movies do.  They’re quite right about the money aspect, however.  They also take in films that make no claims about being true, such as Poltergeist, which drew inspiration from an actual case but didn’t make that assertion.  It’s also odd that they didn’t ask some of the writers about this.  I once met Brent Monahan, author of An American Haunting.  He readily admitted some of it was made up.  In other words, taking offense at the “based on a true story claim” feels a bit naive.

In some cases they speculate what might’ve happened without visiting the location.  It’s hard to tell if a leaky roof can explain things when you don’t specify if the room is on the first or second floor.  Also, suggesting a young boy is faking because a professional magician can duplicate effects raises its own set of questions.  If a kid is as good as a professional, why doesn’t s/he go on the circuit and make some money from it?  That kind of question, by the way, characterizes much of the skepticism in the book.  Why not become a magician?  Because we don’t have the whole story.  It seems to me that dismissiveness doesn’t really help to get at the truth.  Nevertheless, this book contains much that is useful and skeptical voices should always be included when attempting to sort our extraordinary claims, even if you never , ever want to be caught without a camera. 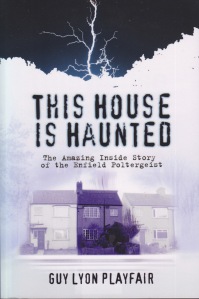 Fair play, so the adage dictates, includes turnabout.  Well, that may be overstating it a bit, but after reading Joe Nickell I decided to give the other side a shot.  Guy Lyon Playfair’s account, This House Is Haunted: The Amazing Inside Story of the Enfield Poltergeist, was originally written in the aftermath of the truly bizarre happenings at that location in the late 1970s.  My reason for reading the book, as maybe you’ve guessed, is that Ed and Lorraine Warren had a hand in the story.  Or at least a finger.  The movie The Conjuring 2 was based on the Enfield case and it placed the Warrens front and center in its resolution.  This is Hollywood, however, and since I’m working on a book on demons I need to try to dig beneath the surface a bit, into regions where tenure-seeking academics often fear to tread.

Interestingly, the Warrens are not even mentioned in Playfair’s book.  The edition I read was updated in 2011.  Playfair himself was one of the two primary investigators from the Society for Psychical Research.  The other was Maurice Grosse (who features in the movie).  Before eyeballs start rolling, it’s worth noting that the Society for Psychical Research is actually a respectable academic association.  As Playfair makes clear in his book, many of the members are skeptical and few believed that the evidence gathered by Grosse and Playfair indicated anything paranormal at all.  The book isn’t shy about dropping the names of the many investigators who dropped in—some uninvited—to either study or debunk the infamous poltergeist.  The incident, however, went on to inspire the movie Poltergeist by giving it free license to change almost all of the details.  Of the many investigators the Warrens remain unmentioned.

On this blog I’ve been chronicling the on-going struggle of trying to figure out what Ed and Lorraine Warren were up to.  Those who met and interviewed them invariably state that they were/are sincere.  They didn’t accept payment for their investigations, and often seem to have been genuinely interested in helping the people plagued by what mainstream science claims simply can’t exist.  Nevertheless, they had and have detractors even amid the parapsychology crowd.  Playfair’s account is quite interesting.  Called in early after the onset of strangeness on Wood Lane, Playfair recorded and recounted what he saw.  He caught some trickery and wasn’t shy about pointing it out.  At the end of the episode, however, he remained convinced that something unexplained had happened there.  Nickell dismisses it all with a sentence or two.  In the interest of fair play it would seem only right to hear the other side of the story.

You have to love skeptics.  Really.  Like most people who’ve spent many years attaining a doctorate, I’m naturally skeptical about many things.  One thing that I only temporarily lost (between about 1991 and ’99, if I recall) was an open mind.  That is to say, I discounted many things out of hand because people with doctorates don’t countenance such things.  I eventually realized the folly of academic arrogance and went back to considering things by actual evidence.  The results were interesting.  In order to help with my Ed and Lorraine Warren dilemma, I decided to read The Science of Ghosts by Joe Nickell.  It’s hard not to like Nickell.  He was a stage magician and eventually earned a doctorate in folklore.  He then made a career out of being a paranormal investigator.

He begins his book by claiming to have an open mind about ghosts.  Very quickly, however, a skeptical reader with an open mind notices his magician’s tricks.  He’s very good at misdirection.  While putatively not debunking (but actually debunking) ghostly encounters, he time and again comes to the states of consciousness when individual super-impose images from the  unconscious mind onto what they’re seeing: when falling asleep, in the middle of the night, when waking up, when doing routine chores, when concentrating, when working.  That about covers over 90 percent of human time.  During these periods we’re likely to mistake what’s not really there for what is.  It could explain much of the driving I’ve witnessed in New Jersey, if not ghosts.  And he also picks straw men (and women) to knock over (pardon the violent metaphor).  Accounts by the credulous are his favorites to explain away.

What we really need is a middle ground between credulousness and a skepticism that can’t be convinced even by evidence.  Yes, ghost hunters use ridiculous methods for claiming “proof.”  Yes, some credible people legitimately see incredible things.  Nickell never deviates from his definition of ghosts as a form of energy left by the departed.  Nobody knows for sure what ghosts are, of course.  If they did there’d be little mystery about them.  Although Nickell claims openmindedness, he states at several points that at death brain activity ceases therefore nothing can think, walk, or talk afterward.  As any experimentalist knows, the results reflect the way an experiment is set up.  If the assumption is that there can’t be ghosts, there won’t be ghosts.  To get to the truth of the matter something between credulousness and biased skepticism must be brought to the table to see if it really tips.  Skeptics are fun, but an actual conversation might be more fruitful.