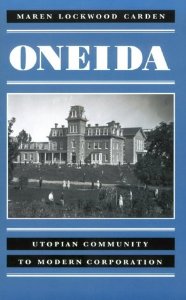 Utopia. Sounds like a good idea—what’s not to like? There have been a number of attempts to form utopias in this sad, violent, and secular world, and although none have succeeded, it is difficult not to admire their spirit. The Oneida Community has long been a source of personal fascination. In that region of New York where spirituality was so urgent that many people crowded to the purveyors of new salvation, the Perfectionist sect of John Humphrey Noyes eventually settled down. Oneida: Utopian Community to Modern Corporation, by Maren Lockwood Carden, was written in the late 1960s as a sociological study of the followers of Noyes. Although the data are dated, it is a respectful, careful study of an unconventional group of utopians who managed to keep a dream of sorts alive for three decades in the latter half of the nineteenth century. If we known anything of the Victorian Era, it is that sexuality was handled with extreme delicacy and reticence. Most people would not have survived half an hour of Fox’s standard evening programming. Beneath social convention, however, they were as hot blooded as people have always been.

John Humphrey Noyes was a troubled soul. Like many institutors of religions, he was a seeker who knew what felt right but never believed he could find it. He studied theology at Yale Divinity School, and he had been profoundly moved by the Perfectionist movement. Perfectionism traces its roots to John Wesley and his perpetual need for assurance of salvation. Indeed, Noyes appears to have picked up the ideals of Perfectionism from Wesleyan theologians of the day. Noyes, however, believed that perfection on earth meant sharing everything. Well, nearly everything. Having been chased from a location or two for his radical ideas, Noyes and his followers eventually settled in Oneida, where they could practice “complex marriage” in peace. While few people remember the other doctrines of the Oneida Community, complex marriage is one from which even sociologists can’t keep their eyes. All adult members of the community were expected to love each other fully. While avoiding incestuous unions, all adults were married to all others. By practicing male continence, they kept the birth rate down, and, to the surprise of many visitors, seemed the most civil and sophisticated people around.

The Oneida Community, however, outlasted John Humphrey Noyes only by becoming a corporation. As most couples registering for their weddings even now know, Oneida tableware is considered of very high quality. The company, at least until the 1960s when Carden’s book was published, was under the leadership of one of Noyes’ descendants. Carden’s book delves into the running of the corporation as much as into complex marriage, and points out the very real impact the Oneida Community has had on America. I also think of it as a paradigm. It began as a Perfectionist utopia, a religion of (free) love and concern for all others, and ended up as a business corporation. Any number of other churches might fit into that same pattern—they begin as idealistic enterprises and end up as businesses. Perhaps this is the truly fallen state of humanity. We start out spiritual, but end up sadly entrepreneurial.

The word “cult” is no longer used by religious specialists to refer to New Religious Movements, but when I was growing up in a fundamentalist home it was liberally applied to suspect groups. While having breakfast this morning I realized just how deeply rooted in American culture such groups are. I reached for my cereal. The reason that many Americans eat cereal for breakfast stems directly from the healthy lifestyle advocacy of John Harvey Kellogg of the Seventh Day Adventists. Adventists are vegetarians and are very concerned about healthy eating. Kellogg was a devout Adventist and produced Corn Flakes as a means of providing a—pardon the term—kosher choice for breakfast foods. Of course, growing up I’d been warned against the “cult” of Adventism, even as I happily munched their Corn Flakes. 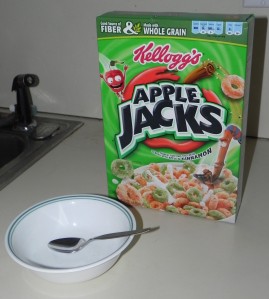 So today I decided to have some Apple Jacks instead. Apples made me think of John Chapman, better known as Johnny Appleseed. Americans learn about the eccentric apple-planter from childhood, but most never learn that he was also a missionary for the Swedenborgian Church. Named after the Swedish scientist and theologian Emanuel Swedenborg, this New Church taught doctrines that set traditional Christians’ teeth on edge. Believing that Christ had already returned in the words revealed to himself, Dr. Swedenborg didn’t ingratiate the fundies by rejecting the standard interpretation of the Trinity and by promoting mystical beliefs. John Chapman spread Swedenborgian ideas along with his apple seeds. I’m sure that as we sang the Swedenborgian hymn at Methodist Church camp, we didn’t realize its heterodox origins: “The Lord’s been good to me, and so I thank the Lord, for giving me the things I need: the sun, the rain, and the apple seed—the Lord’s been good to me.”

What good is cereal without a spoon? As I grab my Oneida spoon, selected by my wife and me when we registered for our wedding, I’m sure I didn’t know at the time that the Oneida company is what is left of the Oneida Community. Founded by John Humphrey Noyes in the Burned-Over District back in 1848, the Oneida Community was one of the Perfectionist groups common at the time. Their town of Oneida held everything in common—everything. That included “complex marriage” which meant that all members had sexual access to all members of the opposite gender. They worked to support themselves, and one of their products was silverware. With the death of Noyes and concern of secular authorities about the interesting sex that was going on, the Oneida Community quietly closed, leaving us a company to produce fine stainless steel implements with which to eat our cultic breakfast.