It’s not often that I can claim to be ahead of the curve.  A “late bloomer,” I was a timid child whose reaction to most of the world was a species of phobia.  It probably didn’t help that I watched monster movies and was an early fan of the original Dark Shadows.  As I learned to relate to others and take consolation in religion, these more macabre interests became latent rather than obvious, only to come out into the open when working at a Gothic seminary in the woods of Wisconsin and then being fired from said seminary, casting me into the outer darkness.  I found myself being interested in horror again although I’d put it aside from bachelor’s to doctorate.  Now it started to feel therapeutic.

My wife sent me an NPR story by Ruthanna Emrys titled “Reading Horror Can Arm Us Against A Horrifying World.”  The premise is one I’d read before—we find horror compelling because it gives us skills that we need to survive.  It teaches us how to separate evil from mere shadow and how to (or not to) fight such evil.  In other words, horror can be heuristic.  Those who know me as a generally calm, quiet—shy even—individual express surprise when I confess to my secret fascination.  One of the most common responses is the question of “why?”  Why would anyone want to watch such stuff?  My observation is that those who ask haven’t tried.  Horror is not often what it seems.  Or perhaps they have better coping mechanisms than I have already in place.

The names of many writers of what might be considered horror have gained mainstream respectability.  Stephen King’s name alone is enough to assure the success of a novel.  These days you can mention the name Lovecraft and a fair number of people will have at least heard of it (him) before.  Jorge Luis Borges has respectability for having been Argentine.  Joyce Carol Oates for being both an academic and a woman.  If you’ve read their works, however, there’s no doubt that something scary is going on here.  As Emrys points out, with our world becoming a more polarized and frightened place, horror may be ready to hang out its shingle saying “the mad doctor is in.”  In fact, it may become even more popular than it is already.  We human beings set ourselves up for horror constantly and repeatedly.  I’m seldom ahead of the curve.  I hang back to see what might happen to those out in front.  Call it a survival technique. 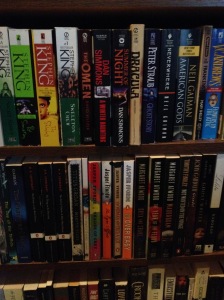 I learned of Jorge Luis Borges through the recommendation of a friend some years back. Of course, knowing about a writer is never quite the same thing as reading what s/he has written. So it was that I recently picked up an edition of Borges’ short stories entitled, biblically enough, “The Aleph.” I find that these stories require slow reading, chewing over rather than swift gobbling down, like so much of what ends up on the mass market shelf. In lives squeezed for time between the incessant demands of cell phones, social media, and plan old television (satellite or cable), spending unrushed minutes with a thoughtful story can seem a waste of time. I suppose that’s the sole benefit to a long commute on public transit—reading is always an option (although, sadly, not one frequently utilized, to guess from all the electronic farts emitted by computerized devices all the way home).

The first tale in my volume is “The Immortal.” Perhaps it is the hand of the translator, but the sensibilities of Borges are not unlike H. P. Lovecraft. Borge was influenced by Poe as well, and as the narrator of this tale encounters Homer in the land of the immortals, it is only fitting that the question of mortality should arise. Joseph Cartaphilus, the narrator, notes that the three western religions all claim to offer immortality, but in reality focus on the only part we intimately know, the part we call being alive. Often this idea has come to me as well when encountering one so sure of an afterlife but so fearful of death. If immortality does not banish terror of the grave, what use is it?

Indeed, as Cartaphilus realizes that he has drunk from the river of immorality, even the company of a devolved Homer can not entice him to live forever. Off he rides in search of death, a solace that comes only once he has sold his story in the form of a used book dealer, within the back cover of the Iliad. Once the story takes on the life of the teller, he is free to die. There is so much going on in this brief tale that two readings have only begun to scratch the surface. Borges lays religion’s follies at its feet, but shows that there is still much more to fear. I can see the draw, and as a new year dawns, I can see myself becoming more acquainted with Borges and gaining the insight that only thoughtful fiction can bring.