The other day I had a hankering for Religion Index One.  I don’t think it exists anymore, at least not in the format I once knew it.  RI1 was a print volume produced by the American Theological Libraries Association, or ATLA.  This tome was an indexed list of journal articles that had come out on any given topic in the past year or so, and it stretched back to the 1940s.  The idea was that it was as close to “one stop shopping” as a scholar could get for finding publications while doing research.  I suspect it’s all done online now.  One of the tricks of the trade I’ve learned from not being part of the academy is that if you maintain membership in one of the larger bodies—the American Academy of Religion, or the Society of Biblical Literature—you can find out who’s working on what by searching the programs of their annual meetings.

This may sound like a terribly geeky thing to do; admittedly it is.  Nevertheless, I’ve uncovered lots of information by doing just this.  If you want to know who’s been researching a topic, look for who’s presented a paper on it over the past few years.  It’s not failsafe, of course.  Some of us aren’t really encouraged to give papers on company time anyway (and what time isn’t company time?) but we nevertheless research anyway.  All the journal articles and book chapters that I’ve contributed over the past six years or so have been invited submissions, with one exception.  Ironically, I taught and published full-time for nearly 15 years with no outside invitations made.  Once I was no longer in a position to access RI1 people started to invite me to submit papers.  It’s pretty difficult to do in current circumstances. 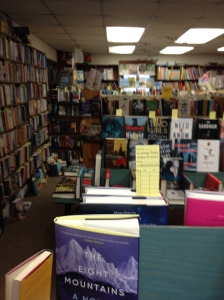 With the continuing factories churning out doctorates in religious studies—itself a stagnant job pool—there’s plenty being published.  Online sources mean even more venues to get things “in print.”  There really is no clearinghouse to find it all, beyond Google.  ATLA still exists, and they now produce a searchable database.  Like JSTOR, however, it’s only available to the traditional academic and the occasional wealthy bystander.  Since the AAR and SBL programs are open to the public for searching, even sorts like me can gain access to a small wealth of knowledge.  Or at least a wealth of papers and publications, which may not be the same thing.  Still, in quiet moments I reflect on walking to a physical library and thumbing through a book made of authentic paper, and feeling, at the end of the day, as if I’d accomplished something.

Academics, as a rule, focus on books by other academics.  Theirs is a specialized vocabulary with specific goals (tenure, then an Ivy League position).  It’s easy to see, sometimes, why they distrust books by those of us outside the academy.  We aren’t as constrained, and can say some speculative stuff.  I just finished Evil Archaeology: Demons, Possessions, and Sinister Relics, by Heather Lynn.  Now, most academics I know won’t take seriously a book where the author is cited by “Ph.D.” on the cover.  That’s a sure sign of trying to impress a lay readership.  This book is clearly heartfelt, and personal, but it does raise a host of questions regarding sources and details. I found myself wondering where the author found out so much about Pazuzu when I, who hold a doctorate in ancient West Asian studies, had such trouble locating sources.  Then I checked the bibliography.

Even academics have been known to cut a corner or two, now and then.  For my last book I didn’t have access to a university library so I had to make do with what I could get my hands on.  (JSTOR is not cheap for individuals, in case you’re wondering.  If you teach and you get free access from your library, you don’t know how lucky you are!)  So it is with my present research.  I muddle along, often buying used copies of the books I need, sometimes from eBay.  Researchers can be driven that way.  Lynn’s book covers a lot of territory, and not all of it seems related to demons.  Little of it covers archaeology in any detail.  But then, it’s not intended for academic readers.  I learned a thing or two.  I also distrust a thing or two she claim (having once been in the academy), but there’s no doubt she’s trying to do a service in this book.

Demons cut a wide swath.  Lynn discusses bits and pieces from here and there, and at times her treatment is rather a gallimaufry of anecdotes.  There are interviews, personal experiences, and urban legends.  It does seem hard to believe that scientists worldwide are studying demons in order to explain illnesses, though.  For me, finding a new book on demons just when I was finishing my draft on the same topic, it was imperative to read what she had to say.  It’s clear she’s seen some of the same movies I have.  I like to think that, as an inbetweener I can still read academese as well as regular writing.  You always find interesting things there in the middle.

I remember seeing a television commercial once (not during the Super Bowl) where an older guy, a lawyer, complained at the camera, “It used to be that lawyers didn’t advertise.” He went on to say that he felt uncomfortable promoting himself since it was in poor taste, but since the legal profession had swung that way he was entering the game. I know how that guy felt. I grew up with the firm notion that self-promotion was in bad taste. If my career has taught me anything, it’s that unless you’re born well connected, if you don’t promote yourself nobody else will. Still, it rankles. With that hearty introduction, I would, in poor taste, point out that my latest article has been published. Those of you who keep an eye on this blog will know that I gave a paper about the Bible in Sleepy Hollow to a learned society a couple years back. That paper is now available in the Journal of Religion and Popular Culture.

Doing research is difficult when you don’t have institutional support to carry it out, but doing such things as an independent scholar can be kind of liberating. I used to research, write, and get published an article a year, back in my teaching days. Nashotah House didn’t have the greatest library, but they did have interlibrary loan and, towards the end of my time there, internet access. More than that, life wasn’t measured in increments of nine-to-five. Living on campus, commuting could be measured in seconds rather than hours. Although publication didn’t bear the weight there that often pressures academics elsewhere, like that lawyer whose name I can’t remember, I wanted to be in the game. I guess I still do.

In these days of uneducated government, if you don’t do it yourself nobody’s going to do it for you. It’s what I once called “the educational imperative.” We are duty-bound, as conscious beings, to move knowledge forward. How many apocalyptic scenarios are there where, when the powers that be devolve into inanity, the monks in their cloisters have to keep knowledge alive? (The question’s rhetorical.) I’m reminded of Station Eleven by Emily St. John Mandel since there women do a good bit of keeping the culture alive when society collapses. Or, to put it another way, like Sleepy Hollow. When the forces of evil break into the world, it’s an African American woman who saves it. If your school has access to JSTOR, you’ll be able to find out more in my paper.

One of the unadulterated pleasures of life—or maybe adulterated is the better adjective—is the used book sale. The year I missed the Hunterdon County Friends of the Library sale felt like a year without a summer. There are other book sales around, but this one’s my favorite. Books are my heroin. You see, I became an academic because it was too difficult to make a living as a writer. Besides, I never formally studied writing and what are you without credentials? Just a poser making some claim of talent. Like most academics I learned to write in staid, measured prose, never exaggerating or showing any emotion. Research for that kind of writing requires a university library since who can afford those kinds of books and you need a JSTOR account to keep on top of all the journals. You read and read on the same topic for months at a time until you have something new to say. Thus knowledge, they tell us, progresses by baby-steps, into a safe and conservative future.

The reading that I do is of a different species. I’ve had academics ask me “why don’t you do research on the bus?” Have you ever tried to do research on a bus? Some stranger sleeping next to you with his/her body relaxing and melting into your side of the seat, their arm falling off their rotund belly onto you before being retracted to start the cycle all over again? And staid, measured prose before the sun comes up hardly makes the trip any faster. Of course editing pays much, much less than the professorate. So I buy cheap books. Nothing like a buck a book to bring out the reasonable side of any economically minded obscure private intellectual. You never know what you’ll find at a book sale. Some of my best reading experiences on public transit have been at the behest of orphaned books others turned out into the streets. Books I would never have read otherwise. Books that I feel would understand me.

The once and future academic in my brain tries to reconcile this with what I paid thousands and thousands of dollars to learn how to do (research). Isn’t this in some way pushing knowledge forward? After all, maybe a dozen people will read this post and that’s kind of like publishing, isn’t it? Don’t mind me, I’m just book drunk. It’s the used books talking. While my academic friends prepare themselves for a summer off, some going to vacation houses they justly deserve, I’ll be filling my commute with adulterated books. And hopefully by the time I reach the bottom of this stack another sale will come along so that I don’t have to go through withdrawal. Methadone for books hasn’t been invented yet, and besides, I take no substitutes.