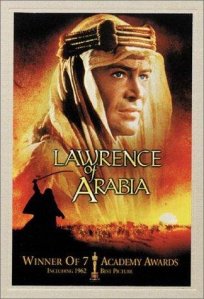 While the appellation T. E. Lawrence may leave many scratching their heads, “Lawrence of Arabia” will still garner nods of recognition. Of course, having a major movie made after you is a pretty good way to retain currency. Being a student of the history of religions, focusing on those of ancient West Asia, I read about Lawrence as I was doing background reading on what would eventually become known as the Middle East—another contrived name. Lawrence, who apparently disliked being called, “of Arabia,” along with Gertrude Bell, played a formative role in what would become a theater of European entanglements that continue to cause trouble to this day. The First World War gave opportunity for colonial interests to play out in the tribal polities that had worked in that part of the world for centuries. The fact that many of these countries are oil rich didn’t hurt.

Yesterday, starting very early, my wife and I settled in to watch the movie Lawrence of Arabia. Since it was released the year that I was born I might be forgiven for missing the first run in theaters, but I really hadn’t had the opportunity to see it before. Sure, you can pick up the DVD in many bargain bins at video stores—now also becoming rare—but a day with four free hours to watch a movie is also an endangered species. What struck me the most about the movie, after the commitment it takes to spend so long watching it, is that the few women who appear in it have no lines. Or lives. No woman speaks for this entire film. Although the portrayal of the Arabs is positive, the utter invisibility of half of all people on the planet is somewhat bewildering. Although not shown in the movie, Lawrence was known to be able to pass himself off as a woman, it is said. Yet the real women are missing, as if their stake in the world following the war just didn’t matter.

It may have been intended as a man-cave of a film—fighting scenes (although mild by present-day standards), things blowing up, and an awful lot of masculine bravado make up much of it. Still, men are not known for sitting patiently while minutes and minutes of visually lush desert scenery and blur shots of the sun take up so much of their weekend time. Yes, women did not fight in the field during the war, but they were an important part of the story. Gertrude Bell, as I mentioned, was a key figure in the drawing up of the boundaries of the Arab world. The movie isn’t about her, nevertheless the women show up in numbers only twice, once to wave goodbye the to army off to take Aqaba and then as nurses to help the overflowing hospital in Damascus. In neither scene do they talk. Perhaps it is intentional, but such a tactic made the desert seem very barren indeed. War has victims of all genders. 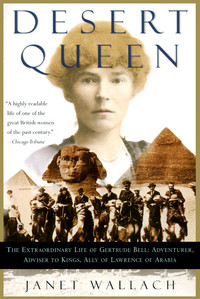 Gertrude Bell requires no introduction for students of the ancient Near East. A strong-willed, self-determining woman, her influence was arguably as great as that of her friend T. E. Lawrence (Lawrence of Arabia), but being a woman in a man’s world, movies were not framed around her life and she was not mythologized into a larger-than-life character. I have just finished Desert Queen by Janet Wallach, the life story of Gertrude Bell. Although tending towards the overly romantic in parts, this biography does a fine job highlighting the influence Gertrude Bell had on the newly formed country of Iraq at the close of the First World War.

Although Gertrude early lost her mother she was a child of a well-to-do English family. She was considered an anomaly at a still patriarchal Oxford in her day, but soon discovered the draw of the Arabian and Syrian deserts. Traveling seemed to be an antidote for being a capable woman in a man’s England. In the desert the sheiks and tribal heads came to treat her as an equal, like a man. (T. E. Lawrence, on the other hand, was famed for occasionally pretending to be a woman.) Assigned a government post in post-war Iraq, she helped draw up the borders of the present nation of Iraq and achieved a status with the desert tribes to which few of her male colleagues even aspired. Failing in health and fortunes, lonely in the desert she loved, Gertrude Bell committed suicide in Baghdad and was buried in the land she loved.

The story of Gertrude Bell is inspiring despite its sad ending. Here was a woman who refused to accept the model society cut out for her gender. Part of her loneliness resulted from her staunch unwillingness to be like other passive, subservient women of her time. After the reigns of political power slipped from her hands, Gertrude Bell founded the Baghdad Museum, collecting the initial artifacts herself and donating a substantial portion of her remaining funds to the museum in her will. Until the “Second Gulf War” it was the finest collection of ancient Mesopotamian artifacts in Iraq, where culture itself began. Gertrude Bell’s books are still read, but she is still known primarily as the associate of Sir Leonard Woolley and Lawrence of Arabia, although she was a woman on her own terms. She remains a symbol of what might be accomplished even when the standards of society declare a person unfit to lead based on gender or any other physical attribute.