I wish I had more time for reading short stories.  I grew up on them since, like many young boys I lacked the attention span for entire novels.  Many collections of short stories sit on my shelves, but I’ve been drawn into the world of extended stories, perhaps because so much of reality bears escaping from these days.  In any case, I find myself neglecting short story collections.  I have a friend (and I tend not to name friends on this blog without their express permission—you might not want to be associated with Sects and Violence!) named Marvin who writes short stories.  This past week his tale called “Meh Teh” appeared in The Colored Lens.  Marvin often uses paranormal subjects for his speculative fiction. 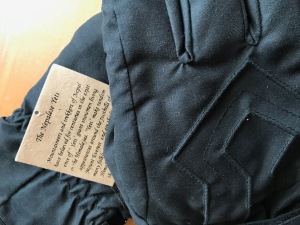 “Meh-Teh” is a Himalayan term for “yeti.”  Since we jealously guard our positions as the biggest apes on this planet, science doesn’t admit yetis to the realm of zoology without the “crypto” qualifier in front.  Still, people from around the world are familiar with the concept of the abominable snowman.  Maybe because I grew up watching animated Christmas specials, I knew from early days that a mythical, white ape lived in the mountains, and that he needed a visit to the dentist.  The yeti has even become a pop culture export from Nepal, since those who know little else about that mountainous region know that strange footprints are found in the snow there.  Apes, however, like to dominate so we tend to drive other apes to extinction.  Still, they had to be there on the ark, along with all other cryptids.

I recall an episode of Leonard Nimoy’s In Search of that dealt with yetis.  Or was it a Sun Pictures presentation about Noah’s Ark?  I just remember the dramatic earthquake scene where either the skullcap of a yeti or a piece of the true ark was buried, lost forever under the rubble.  Yeti is also a brand name for an outdoor goods company based, ironically, in Austin.  This fantastical ape has become a spokesperson, or spokesape, for the great outdoors.  All of this is a long way from the story Marvin spins about the great ape.  As is typical of his fiction, religion plays a part.  I really should make more time for reading short stories.  In a world daily more demanding of time, that sounds like a solid investment.  And free time is more rare than most cryptid sightings these days.

He lived long and prospered. Perhaps it’s a generational thing, but the icons of my youth have been dying. I have to confess to having sat far too many hours in front of the television as a young person, but fantasy of all sorts helped me cope with reality. Leonard Nimoy was a kind of father figure, in a way. Similar to Jonathan Frid, Russell Johnson, and Fred Rogers, all of whom stood in for an absentee parent and showed me different aspects of what it meant to be a man. Watching them die is like having someone tear pages from the book of my life—they made strong impressions, even though it was all make-believe. It’s difficult to say why Leonard Nimoy’s passing hit me so hard. I guess that the conceit of Spock living far longer than humans took hold at some level, and the rational, unflappable Vulcan seemed like a stable, if somewhat emotionally cold father to a child who was, in his own mind, conceived by the television itself.

I don’t really consider myself a nerd. I don’t have the tech to back me up. I’m more like a hermit who spends weekdays in Manhattan. Still, when anyone says Kirk or Picard, there is only one right answer. I watched Star Trek when it was new, still in original reruns. My mother decried it as “silly nonsense,” but along with other monster generation kids, I had my face pressed to the screen waiting to see what new and weird form of life might appear. It was the late sixties and all of this was fresh and untried. Star Trek became a vital part of my childhood. I think it might have been because this was a place with no limits. No limits beyond a shoestring budget, in any case. Space, as I was learning, was vast. There were endless possibilities out there. 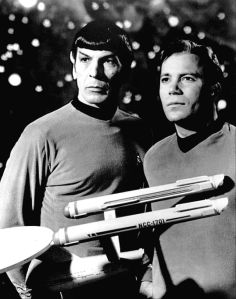 As an adult, the possibilities seem somewhat severely effaced. I’ve tried to be rational and moral and conscientious, but I haven’t really held down a regular career. I don’t watch television any more, and instead read books and ask probing questions. Why does Spock resonate so much with me? Was it because he was apparently immune to emotion? Or maybe he was simply able to rise above it, since everyone knows he is half-human and even Vulcans have emotions, albeit deeply buried. Those of us who followed the original crew through the movies suffered through his death before. And his resurrection. This time, though, it’s not Spock who’s gone. Leonard Nimoy is one of those few people who, in their own lifetime, become a symbol. And symbols, if they are of any use, live long and prosper well after their creators pass on.