Poignant is the word that comes to mind.  Perhaps in stark contrast to my listening to My Chemical Romance, I’ve also been listening to the latest albums by artists such as Bruce Springsteen (Letter to You) and Meat Loaf (Braver Than We Are).  And Leonard Cohen (Thanks for the Dance).  In the last case the album was so late as to be posthumous.  Before that I spend quite a bit of time with David Bowie’s Blackstar.  These albums are, at least in part, about growing older and dying.  Now death is nothing new to rock-n-roll, but it seems as if as some of my favorites age they’re sending a message out from the autumn of their careers.  We may still be here, but we won’t be forever.

I’ve never really been afraid of dying.  In fact, as a kid I often imagined myself as an older man with some anticipation.  Now that I’m approaching that threshold of elderhood the view is just a touch different than it was to a small boy with a lifetime in front of him.  Leonard Cohen, at least, was dealing with aging as early as Various Positions, the album where he gave the world “Hallelujah.”  And Springsteen has toyed with it in various places, such as Devils & Dust.  What I’m hearing in these songs, however, is a kind of acceptance that isn’t really fearful at all.  It’s as if rock suddenly matured.  So many of the original pioneers died young and tragically, and those who survived have been calling to us like ghosts to let us spend our worn-out days in peace.

Perhaps it’s just that it’s November.  Light is becoming a rare commodity, and it will remain in short supply until around the middle of March or so.  Music helps us through the transitions.  There are albums that convince me I’m immortal.  If I weren’t so tired at the end of the day I might continue to believe that.  On a weekend when I had a few free moments I went to a local CD store.  Wearing mask and gloves, I could see that only people about my age were there to buy actual discs.  We’re not the streaming generation.  It gave me some comfort to see the names of bands I’d almost forgotten.  These artists, of course, will continue to live on after they’re gone.  They’ve left us a legacy.  We’d be wise to consider their advice from time to time.  And take a moment or two to reflect on the coming of December.

Strawberry ice cream. It tastes like summer in a waxed cardboard carton. While having a small dish of it recently it occurred to me that strawberry is my favorite flavor of ice cream. This was the first time I’d had any in perhaps twenty years. I am not diabetic, but I am extremely phobic. I avoid the things I like out of fear. There always seems to be plenty of bad to go around, but I’m always afraid the good will run out. Waiting two decades for something I like is a small price to pay. This same phenomenon accompanies my musical tastes. When I listen to music, generally, I listen to music. I’m not a background music personality. Life has been so busy lately, however, that I don’t have the time for music that I would like. I bought a CD (yes, they still make them) of Meat Loaf’s Hell in a Handbasket shortly after it was released. I just listened to it over the weekend. (It has been that busy.)

Since I had a lot to accomplish last weekend I listened to the CD as background music, violating my own standards. That meant that I had only impressions of what was going on rather than the full impact. Immediately, however, I was struck at how socially conscientious this album is. I realize that Meat Loaf is primarily a singer, performing songs written by others. Nevertheless, it seems that a singer must have some investment in the songs they perform to put the kind of empathy into them that Meat Loaf does. The theme that seems to be running through these selections is that violence and greed have become our paradigms, and we are heading to, well, Hell in a handbasket.

I’m old enough to miss album art. I don’t miss the hiss, skips, and pops of vinyl, but the square foot of album art was often a gift. The album art is part of the message of the music. Inside the back cover of the Hell in a Handbasket CD, behind where the disc is mounted, is a gothic photo of Meat Loaf holding a skull, Hamlet-like, before a large cross. Around his neck is a chain that holds another skull, and, with a bit of imagination, perhaps a small crucifix. (Like most people who still remember album art, my eyes aren’t what they used to be.) Something is happening here that I can’t quite define. Jim Steinman is not on this album, and my fear seems to rise. Then I listen and I hear my social consciousness being in some small way affirmed. It may not be Wagnerian rock, which I fear is rapidly running out, but it is worth another listen when I’m able to set aside the world for maybe an hour or two.

I’ve never been a hero worshipper. Perhaps the delusion set in when I realized several years ago that nobody really has all the answers. The “experts” (I’m even sometimes shackled with that designation at times) are limited by the same mental capacity as all Homo sapiens. Our elected officials do their best to find solutions, but at the end of the day oil still gushes into the Gulf, priests still violate children, and unemployment continues to wreck lives. No, hero worship is counter-productive and leads only to disappointment. Not that there aren’t people I admire – there are many – but they have their shortcomings too.

One of my admired people that often surprises those who know me is Meat Loaf. I really don’t qualify as a head-banger, but my tastes in music vary widely. With Meat Loaf the attraction is the sincerity evident in his voice. He may not write his own material, but the man feels the songs he belts out. So it was that I made a rare music purchase when Hang Cool Teddy Bear was released earlier this month. On glancing through the liner notes I was pleasantly surprised to find Boris Vallejo’s Crucifixion among the art. 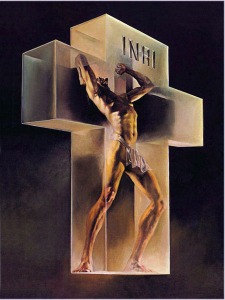 Anyone familiar with the fantasy-style artwork in most Meat Loaf albums will not be surprised at finding Vallejo’s work, but this particular piece, reminiscent of Salvador Dali’s “religious” paintings, presents a depth of feeling to the crucifixion that most theologians diminish in their desire for profundity. The Jesus in this piece is sealed within the cross, raging for release. Most devotional paintings show a placid Jesus accepting, with existentialist-type calm, his long-foretold fate. I find Vallejo’s work compelling for the same reason I enjoy Meat Loaf’s performances – there is real emotion here.

Religion has little to offer the world in the way of rationality. Theologians have generally accepted the fact that religion runs counter to reason and therefore its value lies elsewhere. What is left when reason is gone is emotion. When reason tells me there are no heroes left, emotion sometimes convinces me otherwise.