It is perhaps unusual to stop and think about who you are. From the moment consciousness kicks in, our lives are a non-stop progression of stimuli and response and taking the time to stop and think what someone else must be feeling is, I sometimes fear, a dying art. Although I can’t accept the goddess hypothesis, purely on historical grounds, I am utterly at sympathy with it. I sensed that when Merlin Stone took the time to introduce herself to me at an American Academy of Religion and Society of Biblical Literature annual meeting some years back. She was one of the few who knew and appreciated my book on Asherah, and I in turn knew of her work both as a feminist and creative theological thinker. It was an honor to shake her hand. The heart of work such as that of Stone and Marija Gimbutas was that women deserve, and have always deserved, to be treated equally with men.

Watching Girl Rising, I was forcefully reminded of this once again. A 2013 documentary film telling the story of nine girls from “third world” countries, the movie is quite sobering. In many parts of the world women are still treated as property, although slavery has been considered a violation of human rights for well over a century. Hearing what young girls have to face in much of the world is heartrending. Hearing what certain unnamed presidential candidates have to say in this country is downright terrifying. Why is it that so many men never stop to consider what it would have been like for them, had they been born female? Would they have accepted that their lives would consist of lower pay and their healthcare would teeter in the balance every four years when a new crop of neo-cons puts the White House in its sights? And this is called the “first world.”

Having been raised by a woman who had, for many years, no support of a husband, I have been sensitive to the plight of women my entire life. I could see no reason that my mother shouldn’t be given the opportunity that other people had. Courageous, strong, and self-abnegating, she did what it took to raise her sons in a safe and loving environment. In my own experience of adulthood, full of struggles and turmoil as it has been, I wonder what life would have been like had I been a girl in similar circumstances. What if I had been born a girl in another country where my active mind would be grounds for beatings, or being shot? It is unconscionable. There may not have been an egalitarian society that centered on the worship of a goddess, but there is no reason we shouldn’t try to make such a peaceful, fair, and just society nevertheless. If only men would stop to think about how distorted a one-sided view of life inevitably becomes, perhaps the entire world would be able to claim to be “first.” It is only when women and men share rights that the world can start to be considered a just place. 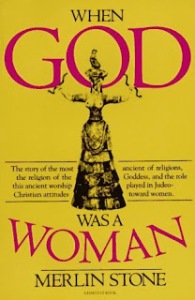 Merlin Stone was a sculptor and an artist. I met her only once, a few years back when I was still recognized as an “authority” on ancient goddesses. At one of the many Society of Biblical Literature annual meetings I attended, she came and introduced herself to me, thanking me for my work. Of course I knew who she was—the author of When God Was a Woman, one of the books that was most influential in the revived goddess movement of the 1980s. I have always appreciated those women who have dared to take on the often amorphous patriarchal power structures of society to raise the necessary questions of fairness and justice. Stone was one of those women. Her book, while based on sometimes questionable historiography, nevertheless highlights some of the issues that many male scholars have chosen simply to ignore.

One of the biggest problems faced by authors like Merlin Stone and Marija Gimbutas has been the shifting sands of history. I recently had a deep conversation with a couple of feminist friends of mine where the issue of truth emerged. Truth, as I came to realize, may be a temporary phenomenon. What is true today (the earth is the center of the universe) may not be true tomorrow. It is always contingent. Historians reconstruct a past to which they do not have direct access, and further discoveries will often detail the errors made along the way. When God Was a Woman was originally published in 1978. Some of the historical constructs that Stone uses have since crumbled, but the main point of the book remains firm—women have as real a claim on the divine as do men. (I can’t help but wonder if there is some connection between this and the recent trend towards prominent male thinkers declaring themselves atheists.)

Although I can’t agree with everything Stone wrote, one of her ideas dropped a hook in my brain. In describing the sexuality that apparently attended worship of “the goddess,” she notes how male scholars came to refer, always derisively, to the such religions as “fertility cults.” Turning this phrase about, Stone wonders whether far distant future analysts will look at monotheistic religions that decry sexuality as “sterility cults.” Not that the goddess is all about sex. Religions, however, always weigh in when such spiritually significant activities as sex take place. Men, who are often eager participants, are the ones to construct religions condemning what should be a most obviously sacred human activity.

Merlin Stone may have died just over two years ago, but her book will stand as a yad vashem to half of the human race who have been religiously subjected to the other half. And perhaps there is a goddess out there yet who will bring about liberty and justice for all.