Music is deeply, deeply personal.  That’s why I don’t write much about it.  There are pieces, I swear, if someone walked in to shoot me when I was listening to them I wouldn’t even notice.  This effect is amplified in autumn.  I don’t listen to music all the time.  In fact, I rarely do.  The reason is, counterintuitively, I fear that music may cease being meaningful to me.  Good things have a way of running out.  The music I like is only very slowly supplemented.  So as the clouds encroached this month, I put on some tunes and I began thinking of appropriate songs of the season.  I’ve heard attempts of more recent artists to sound spooky, but their lyrics don’t match the mood I’m seeking—remember, it’s deeply personal.  So what is autumnal music?

Despite being a fundamentalist, I was raised on rock-n-roll.  My favorite artist growing up was Alice Cooper; in fact, to this day Alice is the only secular rock artist I’ve seen in concert.  Two tracks on Welcome to My Nightmare are among those eerie autumn songs: “Years Ago,” and “Steven.”  This album was profoundly sunk in my psyche before I discovered others.  While not scary in the same way, “Brilliant Disguise” from Bruce Springsteen’s Tunnel of Love hits a similar chord.  The melancholy of autumn must be appeased and this song begs to bring it on.  Many of Leonard Cohen’s songs are like the angst of this season bottled up for a restorative tincture, but I was quite a bit older when I discovered Nick Cave.

The Boatman’s Call with its willowy sound and occasionally explicit lyrics, walks that line between a deep-seated spirituality and fear.  There are others, of course, some even fairly recent.  Imagine Dragons’ “Demons” from Night Vision certainly qualifies, as do the first two tracks on Muse’s The Resistance.  But this is my list, and I fear to reveal too much.  Someone who knows your music knows very much about you.  I hear some people discuss music as if it’s a throw-away commodity.  For others of us it has become part of our souls and we’re reluctant to reveal too much.  New members of this autumn music club are added only very slowly, and I reacquaint myself with the long-term members not frequently enough to rob me of their impact.  So it was as the clouds thickened and the cold wind began to blow as the leaves were beginning to turn that I put on my personal songs of the season.  And there was transcendence, but it was, as transcendence tends to be, deeply personal.

When January starts grinding you down you have to find something to hang onto.  See, I even ended a sentence with a preposition.  January.  If I’m not careful I can find myself getting quite depressed, so a bit of self-induced music therapy helps.  Although I hate to admit it, I am a bit of a fussy person when it comes to my likes.  My music tastes are quite personal and I mourn when a performer I like retires or dies.  There’s not a ton of stuff that I enjoy and I don’t listen to music as often as I should.  I work from home most days so I could have music on, but I find it hard to read (which is much of my job) with music playing.  Like I said, fussy.

The other day—a weekend—I pulled out John Cale’s Paris 1919.  John Cale is an underrated member of the Velvet Underground.  Okay, with Lou Reed in the lead it’s gonna be tough to stand out.  Cale, who suffers from competing with J. J. Cale (who was actually John Cale too; I empathize!), is a very thoughtful lyricist.  Despite having been abused by a priest in his youth, he sprinkles his songs with religious references.  “Andalucia” is a haunting single with the words “castles and Christians” hanging there for anyone to interpret.  And “Hanky Panky Nohow” has an intriguing line about nothing being more frightening than religion at one’s door.  There’s something profound here.

I grew up listening to The Velvet Underground & Nico when my older brother played it and the curtain door between our rooms didn’t block any sound.  The only performer I could name was Reed.  Years later, when the music of my young, virginal ears started in with a longing I couldn’t explain, I bought the album and learned of John Cale.  I have to confess that I first encountered his name as the performer of Leonard Cohen’s “Hallelujah” in Shrek.  It drove me nuts when ill-informed students used to say it was Rufus Wainwright; yes, he performed it on the CD, but not in the movie.  John Cale is one of those somewhat offbeat singers, who, like Nick Cave, salts his songs with images of a Christian upbringing that show a grown man clinging to something to which he somehow can’t fully commit.  It makes us who we are and then leaves us wondering.  It must be January.

A gray day in September. Nowhere to go, nothing to do. A stark melancholy races on the winds of a distant nor’easter. It is a perfect day for The Boatman’s Call. 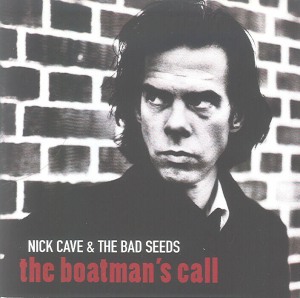 I have to admit up front that I found out about Nick Cave & The Bad Seeds from the Shrek movies. The soundtrack crew from the first two movies did their homework exceptionally well, tapping some truly desultory, lugubrious tunes from artists who don’t make the top twenty. I was so taken by “People Ain’t No Good” that as soon as I could afford it I purchased the album (The Boatman’s Call, not Shrek II). The album begins with the line “I don’t believe in an interventionist God, but I know darling that you do . . .” Throughout the album the achingly sacred and profoundly profane are blended in an eerily subdued way. The music is haunting and thought-provoking. Almost each track on the album has a biblical reference, but these references are mixed with what would be crude if handled with any less artistry.

All that I know about Nick Cave is what I’ve read on Wikipedia, but it is clear that he is well versed in the Bible and makes effective, if dark, use of religious imagery. Perhaps the reason I admire this album so much is that Cave’s ambivalence toward religious structures is so honest. He isn’t out to convert anyone, nor is he willing to let go of his religion. The religion that wafts out of the drafty attic of this disc mirrors the complexity that faith ought to possess. Especially on a dark and rainy autumn day.