Exodus: Gods and Kings is, in many ways, a startling movie. It didn’t leave me with a strong impression of profundity, but it did make me a bit reflective. The media hype about God as an eleven-year-old boy proved to be merely hype. In fact, the boy deity was one of the most intriguing characters in the film. The role was played respectfully, and God, like a good Englishman, favored his tea. There was nothing comedic about it, however. More troubling was the agnostic Moses, à la Clash of the Titans with its unbelieving Perseus. Moses, even after meeting God, comes across as having little interior life. He hides in a cave and builds an army of terrorists making him seem like Moses bin Laden. He conceals himself while innocent Hebrews are hanged for his crimes (and did they even hang people in ancient Egypt?). When a great storm brews over Memphis, however, it is with a sense of wonder that we ponder at an eleven-year-old doing all this.

The movie plays lightly with the scholarly “explanations” that used to be doled out in seminaries about how one plague led to another. In fact, the character called “the Expert” in the credits is shown lecturing the Pharaoh on the causation scheme of clay churning up in the Nile turning it red, and killing the fish which in turn drove the frogs from the toxic water, but when they died flies came along and the flies spread disease. Then the Expert is hanged. Not so subtle a warning to biblical scholars. In fact, there seems to be a science behind much of the movie that makes miracles less acts of God than acts of nature. Even the drying of the Red Sea is understated. Its return is reminiscent of the Christmas Tsunami of 2004. God is sometimes not there when you’d expect a deity to care.

On the matter of caring, for an age of nones who have concerns for equality, the film was thin on women’s roles, making even the Bible appear to foreground them more. Sigourney Weaver—great in any context—seems only to be there to wish Moses dead. Even Miriam is given scant lines in the movie and no role in the Exodus itself. In Prince of Egypt she at least led her famous song. Zipporah is lovely but shows no sign of being as handy with a flint knife as Exodus makes her out to be. A woman of action. Miriam’s quick thinking saved the infant Moses. Overall, however, the Bible is a guy’s book, and Exodus is a guy’s flick. Opening with the battle of Qadesh on the Orontes is a way to draw men to a Bible movie. Lots of slashing, gashing, and charging horses. And the splendor of Egypt, filmed in Spain and the Canary Islands. Some miracles, it seems, are even impossible for CGI.

While discussing Homer with my relatives, it was decided that we should watch the movie Troy. Although conceived as a blockbuster retelling of the Iliad, the presentation reminded me significantly of The Clash of the Titans (2010). In both instances the directors and writers attempted to portray a realism of sorts, making Achilles and Perseus into just regular guys with issues. There is something of the fallen hero here, and perhaps a misunderstanding of the way the Greeks understood their greats. While it can’t be denied that heroes were intended as figures of unattainable stature, they were in some sense conceived as role models for mere mortals. The Iliad is an exploration of the anger of Achilles and the unpredictable influence of the gods.

As the critics pointed out when the movie was first released, the absence of the gods from the film is a serious departure from the Iliad. Without the gods, Achilles takes on a level of prominence never intended by Homer (whoever he was) and the playing out of his revenge begins to feel like a bad western. Although the Iliad does focus on Achilles, it requires an ensemble cast. None of the characters are evil like the movie portrays Agamemnon. He, along with his brother Menelaus, is the hapless inheritor of the curse of the house of Atreus. No matter what Agamemnon does, he is doomed. This fatalism is cut short in Troy as Menelaus, Ajax, and Agamemnon fall in the foreshortened battle of Troy.

The Trojan War is a myth. There is no history to portray accurately here. Instead there are gods and heroes. In removing the gods—a subtle nod toward many modern sensitivities—the movie loses its soul to beat the bank. And so perhaps it is a modern parable for a society that values money above all else. Whether the gods are real or not is immaterial, for they are but projections of the human spirit. Without them we are mere molecules conglomerated into biological entities with no purpose. Troy is a movie that falls short of truly mythical status, but at the same time holds a mirror to modern culture and asks “are you so sure that you can live without the gods?”

Having just finished my Mythology course at Montclair, I’ve picked up a few books to delve once again into a sublimated childhood interest. I was first introduced to Greek mythology back in Mrs. MacAlevy’s fifth-grade class in Rouseville Elementary. The story of Perseus, in particular, has stayed with me ever since. Of course, being taught in serious religion classes that this was all silly nonsense, what with the multiplicity of overly amorous deities whimsically whipping thunderbolts at humanity (everyone knew there was really only a single celibate deity whimsically spreading pestilence among humanity), I drifted away. Mythology continued to be an interest, but the Greek variety went the way of the dodo. The occasional Pauline reference to Artemis fanned the old flames, but just a little. I had more serious religion to comprehend.

So now, decades later, I find myself needing to catch up on the classics. To rejuvenate my interests, I once again turned to Perseus. My brother and I forked out the extra cash for 3-D to see the remade Clash of the Titans this spring, and I found myself even watching the 1981 version in a Harryhausen-induced haze to refresh my memory. The original movie realized the deficiencies of the classic story on the big screen and embellished shamelessly to wow the critics. One of the most memorable scenes was Perseus in the lair of Medusa. So I found myself reading Stephen Wilk’s Medusa: Solving the Mystery of the Gorgon.

Wilk is a physicist and a member of a prominent optical society. He brings the fresh insights of a non-classics specialist to the story of Medusa (I should know, since I too am a non-classics specialist). This study raised my limited level of awareness in several respects, particularly in the repeated emphasis on eyes in the book. What really struck me the most, however, was how it became clear that Medusa was yet again an embodiment of female power ruthlessly struck down by a virile young man with nothing better to do than slay her. Medusa is the victim in the story, cut down for simply being what she is – a strong female figure. I could not agree with all of Wilk’s assessments, but this provocative book brought many interesting concepts to light.

Medusa, like Lilith, is the symbol of fear for a threatened manhood; women who are true femmes fatale – preying on male pretensions for sport. Until society willingly accords true equality, such figures will remain necessary to remind us that gender should never be the factor by which an individual’s contribution is to be judged. I suspect Mrs. MacAlevy knew something that the Greeks had also realized: repression only increases the ferocity of the repressed.

Over the weekend I joined the thousands flocking to theaters to see Clash of the Titans. I first met Perseus in fifth grade and have been intrigued by classical mythology ever since. I tried not to believe that it was nearly three decades ago that I sat in the single screen theater back in Oil City, Pennsylvania watching a film with the same title and Ray Harryhausen’s famous stop-motion animated creatures. I was anticipating great things. While the new Clash is visually stunning at several points, the post-modern story line primarily demanded my attention. While there are gods galore in the film, the message is maybe not atheistic, but, to coin a word, anolatric – denying worship to the gods. Time and again Perseus refuses the help of the gods and when he finally meets Zeus, his absentee father, he shows him anything but respect. 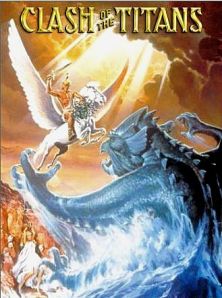 Who let the trogs out?

The Greeks, like all ancient peoples, primarily feared the gods. Not offending deities was a societal expectation since an infraction on the part of any citizen might lead to divine repercussions. Dictys, Perseus’ adopted father, rails against the gods for allowing the degeneration of society, a trait that Perseus takes to extremes in the movie. In battling the monsters, Perseus is storming Olympus itself. In a nod to the Easter weekend crowds, Perseus defeats death himself by banishing Hades to an incongruously fiery underworld. I left the theater slightly stunned; here had been a hero standing before the very gods but refusing to worship. Clash of the Titans indeed.

While my family was off winning the Connecticut Regional First Robotics competition in Hartford (go Team 102!), I had consoled myself the night before seeing Clash by watching the cheesy 1968 Japanese giant monster classic, Wrath of Daimajin (also known as Return of the Giant Majin). I had seen the original Giant Majin some time ago, but here was a “monster” movie where the destructive colossus was himself a god. The Giant Majin is a protective mountain deity who, when injustice grows unchecked, breaks free of his rocky home and destroys the wicked. The Wrath of Daimajin included startling biblical imagery: as the Majin stomps through the sea the waters part as if Moses were on the god’s shoulder. The faithful female protagonist is being executed on a cross (burned at the stake, but tied to a cross), and the Majin breaks the gibbet and holds her aloft, the very tableau of the evil-banishing crucifix. As always, the Giant Majin vanishes at the end, leaving the oppressed to build their own, better future. 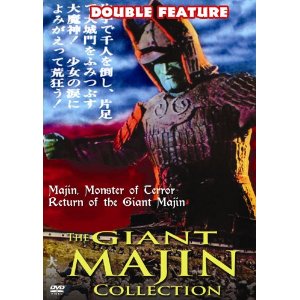 I dream of Majin with a dark green face

Such movies are benchmarks of public theology. Made by laypersons trying to express their ideas about the divine world, I find them a crucial measure for any teacher of religion to watch, mark and inwardly digest. In just 24 hours I saw a Shinto god go Christian and a Greek polytheist lose his faith. The world just can’t figure out if the gods are for us or against us.