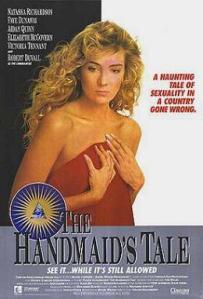 Dystopia reading and/or watching may be more practical than it seems.  History often reveals authors who may be accused of pessimism more as prophets than mere anxious antagonists.  Two books, according to the media, took off after November 2016.  One was George Orwell’s 1984,  and the other was Margaret Atwood’s The Handmaid’s Tale.  I’d read both long before I started this blog, but I recently asked my wife if she’d be interested in seeing the movie of the latter.  While teaching at Rutgers, I had a 4-hour intensive course and to give students a break from my lecturing I’d have us discuss Bible scenes from secular movies.  The Handmaid’s Tale was one of them.  Watching it again last night, I realized the problematic nature of Holy Writ.

The Handmaid’s Tale is a movie (and novel) that involves what I call “Bible abuse” in Holy Horror.  That is to say, the Bible can be used to oppress rather than to liberate.  To cause human suffering instead of eliminating it.  Sure, to make Atwood’s dystopia work a future catastrophe of fertility has to occur, but the military state, the assumed superiority, and the will to control on the part of men are all too real.  We’ve witnessed this in the United States government over the past two years.  A lot more has been revealed than personal greed—that side of human nature that quotes the Good Book while doing the bad thing.  In the movie it’s literally so, while our “leaders” are only a metaphoric step away from it.  Although it’s not horror, it’s a terrifying movie.  I still have trouble watching The Stepford Wives.  Why is equality so easy in the abstract, but so difficult when it comes to actual life?

Aggression is not a social value.  This is perhaps the most ironic aspect of using Scripture to enforce oppressive regimes.  The whole point of the New Testament is self-denial for the sake of others.  That may be why the only Bible reading in the movie comes from the Hebrew Bible, the story of Jacob and Rachel.  Although this isn’t one of the traditional “texts of terror,” to borrow Phyllis Trible’s phrase, it nevertheless illustrates the point well.  A culture that values women only for their reproductive capacities is dystopian to its very core.  When a book, no matter how holy, is divorced from its context it becomes a deadly weapon of blunt force.  Atwood moves beyond Orwell here—the government that sees itself as biblical can be far more insidious that one that only weighs evil on the secular scale.  Not only the Bible ends up being abused. 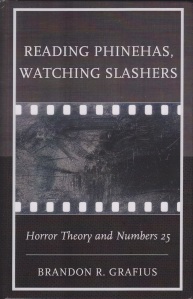 Let me relish this a moment.

Thanks.  You still there?  It’s not too often, you see, that I get to feel like I’m near the front of the crowd.  I began writing Holy Horror when there were a small handful of books on the market concerning horror and the Bible.  I wasn’t aware of Brandon R. Grafius’ work at the time, but it sure is gratifying to see that others have noticed the connection.  Reading Phinehas, Watching Slashers: Horror Theory and Numbers 25 is pretty much what its title says.  I’ll be having more to say on it in a different venue—don’t worry, I’ll let you know—so I’ll keep to the basics here.  My spellcheck, and I’m sure not a few others, might have trouble identifying Phinehas.

In one of those weird, short, violent episodes for which the Good Book is justly famous, the story of Phinehas is clearly part of a larger, untold narrative.  Like the sons of the gods marrying the daughters of men in Genesis 6.  The grandson of Aaron, Phinehas was one of the hereditary priests of early Israel.  The Israelites wandering for their 40 years in the wilderness were nearly as xenophobic as the Trump Administration.  When one of the chosen people chose a foreign wife, Phinehas, full of zeal, grabbed a spear and skewered the couple.  Tradition says in flagrante delicto.  This act of violence stops a raging plague sent by the Almighty, so Phinehas looks like a hero in context.  If you want to read the story the subtitle tells you where to find it.  Or you could read Grafius’ excellent book.

Horror, which should be already obvious, enters the picture in the form of theory.  Yes, there is such a thing as horror theory.  Grafius uses it to analyze this story, along with other methods.  This is what I’m relishing.  I certainly wasn’t the first to notice the connection.  Many years ago Phyllis Trible wrote Texts of Terror, noting how the Bible seems less holy (my expression, not hers) when read from the perspective of a woman.  Indeed, many accounts that seem like standard issue narratives of God laying down the rules and humans disobeying tend to fall pretty heavily on females.  And the punishments used are fit for horror films.  Grafius focuses specifically on slashers, but one gets the sense that this book is just the start of something larger.  This reader, at least, hopes that is the case.

The Bible is a book of horror. This isn’t the main point in Holy Horror, but the fact is terror is never far from the surface in the Good Book. My days as a young scholar of the Bible were defined by the works of feminist scholars. One of the influential books of that generation was Texts of Terror by Phyllis Trible. Not hiding behind a masculine orthodoxy, she looked at how various biblical stories appeared from the eyes of female readers. There is indeed terror everywhere. The evils of slavery condemn that hideous loss of agency when one human being becomes considered the property of another. Women, before the feminist movement began, were taught that the Good Book demands this perverted social structure. They are indeed, in the eyes of its patriarchal world, property.

Important as this realization is, the terrors of Scripture go deeper. Even overlooking the genocides—the numbers make it difficult to take in the horrors of the individuals classed as faceless victims—there are multiple accounts of gruesome murders and violence in the Bible. Wars were an annual expectation. Diplomacy was often considered religious compromise. “Us verses them” mentality led to constant conflict. When it came to executing one another, the denizens of the Good Book could be quite inventive. No doubt women and foreigners were poorly treated on a daily basis, but when left to their own devices with divine voices in their heads, the men of Holy Writ knew how to terrorize one another quite effectively. 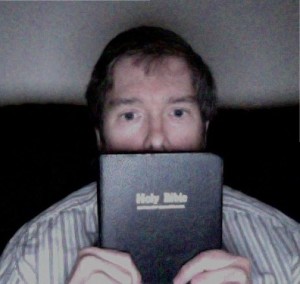 Even after the message of Jesus of Nazareth, which included love and care and compassion, the Bible goes on to close with the violent visions of Revelation. Perhaps it’s not appreciated so much in the present day, but the Apocalypse had a difficult time making it into the Good Book. Unfortunately the reasons weren’t that it was a book of horror, but the very fact that its status was debated should give us pause when hiding behind the rhetoric of a canon with its door slammed shut. The Bible contains some high, soaring words of noble thoughts and divine consolation. God can be an empathetic lover. With its status, in toto, as a book of divine revelation we have to pay serious attention to the fact of its participation in the genre of horror. Much of this is in the backstory of the films I discuss in Holy Horror. Others may have already explored this dynamic of Scripture, but it’s often a Good Book gone bad.