Those of us who find rationalism a bit too constricting sometimes find solace in mysticism.  My reading of late, which is mostly research for Nightmares with the Bible, frequently touches on mystics of the past.  This isn’t a new fascination.  All the way back in college, as a religion major, I mentioned to one of my professors that I found it appealing.  A frown settled across his academic face.  “Mysticism is dangerous,” he said.  He went on to explain that churches (he was Presbyterian, and I Methodist) had belief systems into which mystics—those who experience the divine directly—didn’t fit.  A direct experience of the divine could cast doubt on church doctrine and nothing, as you might guess, is more important to true believers than dogma.

That discussion at such an impressionable age set me aback.  Here as we enter (for the non-orthodox) the Triduum, or “Great Three Days” the faithful are hoping for some kind of divine experience, I expect.  Many of us will spend two-thirds of it working.  In any case, if nothing mystical happens why do we bother?  Mysticism is equally deplored by science since it suggests something that doesn’t fit into rationalism’s toy box.  A universe where the unexplained—and oh so subjective!—direct experience with naked reality threatens to undo all the neat columns and tidy formulas that describe the entirety of existence.  Conventional churches tend to agree because you never know what God might do if you open that box. 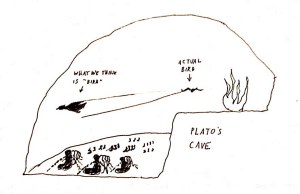 There are religions that welcome mysticism.  They recognize that human-built systems are only approximations—Platonic shadows, if you will, cast upon the cave wall.  Mystics are those who, temporarily unchained, dare to turn around and face the fire directly.  Who knows?  They might even catch a glimpse of the sun itself.  More conventional religions are run like businesses.  You come to a certain building at a certain time.  You perform prescribed actions on cue.  You place your money in this specific receptacle at this specific time.  Leave and forget it all until next week.  Our younger generations don’t find this engaging, just as they see through the lie of the inherent fairness of capitalism.  I can still see the frown of my theology professor.  The old systems are falling apart even as those not too weary after work will head to Maundy Thursday services for a slip of bread and a sip of wine.  The mystic, however, doesn’t know what might happen next.

The conversation began, as conversations often do, with Plato’s allegory of the cave. The nature of reality was the topic of a chat I had with a very intelligent undergrad the other day. Plato believed in a realm of ideal forms. What we experience in life is not the actual forms themselves, but a reflection of them sufficient to alert us to what it is we encounter. Humans are sitting, as it were, in a cave. We are chained so that we face the inside wall of the cave and can’t look around. Behind us there is a fire and the ideal forms pass between the fire and people, throwing their shadows on the wall. Not having ever been outside the cave, we suppose the shadows are reality. We are, however, deceived. This led, naturally enough, to a discussion of Aristotle’s counter-argument that the “essence,” or entelechy, of things is something inherently within it. No need for an alternate realm of reality. And so, I asked, what is reality? What is truth?

My young interlocutor said that reality is what we perceive. It is different for every person, and therefore there are a multitude of realities. Truth is simply the term we apply to our experience of reality. I began to feel as old as Plato. When I was young I believed, not exactly in a realm of ideal forms, but in a universe that contained abstracts. Abstract concepts objectively existed, and in a kind of neo-Platonism, we recognized them when we encountered them. Love, for instance. We may not be able to define it precisely (although materialists claim it is just a pretense to get sex), but we sure know it when we feel it. Or consciousness. What is it? No one reading this doubts, however, that it exists. And truth. I had always assumed that there was Truth with a capital T, objectively floating around out there. Perhaps, if the undergrad is right, there are multiple truths around. We chose the one that fits our experience of reality. Q.E.D.

C.Q.D.! C.Q.D.! Worldviews are in the process of changing. I tend to think the internet has democratized truth. Religions have tended to play their trump card—revelation—at this point. The unambiguous input from the divine should end all questions. But it only requires a moment’s reflection to realize that there are multiple religions and multiple revelations. Which one are we to believe? Some scientists claim there is no need for philosophy, religion, or the humanities. Objective facts, however, are interpreted subjectively. To privilege one reality above others is a kind of intellectual fascism. Perhaps my reality is different. We all sit in the same cave watching the same shadows play in front of us. We then decide what is real. Perhaps we need to get outside for a breath of fresh air. Even Plato knew, however, that that is against the rules.