Now, where was I?  I suspect it’s the same with you.  We’ve got so many things going that it’s difficult to keep up with them all.  When one big project comes along—say reading book proofs for a deadline—everything else gets displaced.  After a week of intense concentration you emerge from a daze and try to remember where you left off with other projects.  What was so dreadfully important before the large project began?  I’m used to deadlines at work, but there aren’t too many in my personal life.  I have goals and targets, to be sure, but due dates slip and slide with the slings and arrows.  When the big project’s done there’s relief, but also a kind of reboot that has to take place.  I’m afraid to look at the news.

The corrected proofs of Nightmares with the Bible have been submitted, along with the index, and now all I can do on that front is wait.  Which of my many other projects, neglected for an entire week, should I take up now?  Part of the difficulty is knowing whether to work on fiction or non.  Given my work-life commitments, fiction is easier.  I enjoy writing it, but I have trouble getting published.  Nonfiction, on the other hand, is simpler to get published but brings in very little remuneration.  I know as an editor that we distinguish between academics (who already have a good paying job) and, say, journalists, who write nonfiction trying to earn a living.  What about an editor who isn’t paid like an academic, but has a regular job nevertheless?  (When talking to an independent, nonfiction publisher a few years back, I heard him respond to the question of if he was non-profit with, “Well, that’s not how I intended it…”)

I have two nonfiction books well along at this point.  I also have several fiction projects, including an eighth novel and a short story collection.  I also have some essays underway for sites beyond my own blog.  A week seems like a long time to put all these things aside and then to pick them up again.  That week wasn’t vacation either.  Nor did it suggest topics for me to address on my blog because if you want to know about Nightmares with the Bible you’ll read the book.  The evening I finished the proofs I had a dream that seemed to stretch through the entire night that I had come up with a complete college curriculum all by myself.  As much as my weary mind wanted to go on to other things it was fixated at that stage.  I awoke to wonder where I’d left off on real life projects, none of which are very near the finish line.  Now, where was I? 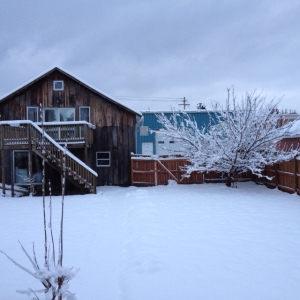 Well before I became an editor, I noted mistakes in books.  I go through phases of marking up books as I read them—in pencil only, please!—and not doing so, but I used to mark mistakes when I found them.  At that point I hadn’t realized the complexity of the process of book production and I had no idea of the many ways in which errors might creep in.  I’m a bit more forgiving now.  In any case, errors are a regular part of book publishing.  Older books used to carry pages with incantational-sounding titles like “errata” and “addenda et corrigenda.”  Errors, in other words, were considered inevitable because every time you have another set of eyes look over the manuscript it adds to both the costs and time for the production schedule.  Then I started writing books.

Now, before I get too far I should explain that many book editors don’t line edit submissions.  The standard “editor” is an acquisitions editor, which means you sign up books for your press, but you don’t necessarily (if ever) actually edit them.  I still have the sensibilities of a copyeditor, however.  That’s the main reason I fear to read my own books after they’re published.  I’m afraid I’ll find mistakes.  I do take the proofreading stage seriously, but often a writer has little control over when proofs arrive with a tight turnaround time.  You have to drop everything to get them returned by the deadline.  I’m always worried that errors might’ve crept in.  For example, with Holy Horror, I corrected with website copy for the book.  The errors, however, remain online.  They’re minor, but as the author you’re always considered culpable for such oversights. 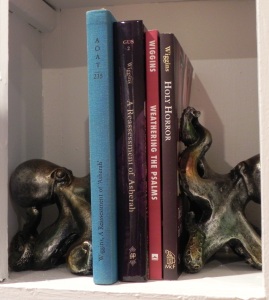 Now that I’m working on a presentation to give for Holy Horror, I find myself facing my fears.  I need to go back to a book already published and look inside.  Since writing it I’ve completed another book, Nightmares with the Bible, and my mind can’t help mixing up a little in which book I said what.  To make sure I don’t tell potential readers the wrong information, I need to go back and reread parts of my own work.  What if I find errors?  Will I have to mark up my own copies like I used to do to those of others?  Will I need to compile an errata sheet?  I tend to be a careful reader, especially with proofs.  But facing possible errors is nevertheless a terrifying prospect, even if it’s a regular hazard for those who attempt to write books.

Writers anticipate and dread proofs.  After several months of delay, I have received the proofs for Holy Horror—it should be out in the next couple of months for both of you who’ve asked about it.  Anticipation is pretty straightforward, but why the dread?  Those of us who write books have to deal with the fact that publishing is, by nature, a slow business.  What I’m proofreading now is material that I wrote a couple of years ago; the final manuscript was submitted back in January.  The internet has accelerated the pace of everything, and now that I have a daily record of my public thoughts on this blog, I can see how my own outlook has changed in that time.  Reading proofs reminds you of whence you came, not where you are.

I suspect that has something to do with the internet and instant access to information.  I also suspect that’s why many of us trust books more than the “open web.”  The oak that has taken centuries to grow is a hardy tree.  The handcrafted piece of furniture lasts longer than the mass produced.  Books, hopefully, stand the test of time.  Writing is an exercise in building eternity.  These thoughts, the author hopes, will be around for some time to come.  As long as libraries endure.   Looking at the proofs, there’s pressure to get things right.  Was I correct in what I wrote down so long ago?  Since then I’ve read dozens of books more.  I’ve even written the draft of another book myself.  I face the proofs and shudder.

Part of my angst, I suppose, is that Holy Horror will likely sell better than my previous two books.  It may actually get read.  No, it won’t be any kind of best-seller, but perhaps a few hundred people will read it.  That’s a lot of pressure for those of us who’ve primarily written for other academics.  Perhaps this fear is the reason I’ve moved to writing about horror films.  Those of us blocked from the academy have to build our own credibility, one book at a time.  Reading the proofs, although already dated, I find myself liking this book.  It was fun to write, and it has a good message, I think.  Even prestige presses know that books about horror films are of popular interest.  As I read through where my mind was in days stretching back before the nightmare of Trump, I see that I had only just started on this path.  Before me are the proofs of that.