Ezekiel was an odd character, even for a prophet. He’s become a kind of patron saint to ancient astronaut theorists, and his name in fiction often denotes someone slightly off balance. In his defense, he believed that God was demanding his many strange actions. A priest in a period of exile from the “one true temple,” Ezekiel lived an existence as a captive in a foreign land and came to some radical conclusions about the nature of Israel’s god. His visions and actions were considered the original weird, even by his contemporaries. Since Ezekiel believed Babylon would conquer Jerusalem, the people there would have to go on starvation rations. In chapter 4 of his book, Yahweh tells the prophet to try to make a bread out of wheat, barley, beans, lentils, millet, and spelt. This odd mixture is to be eaten in very meager portions to symbolize the coming privation for 390 days (during which time he is to lie on his left side). His bread is to be cooked on dung.

I eat breakfast around 4 a.m. My bus to the City comes before 6:00 and there are no restrooms on NJ Transit buses. Many New Yorkers eat breakfast in the office, but I’m just too Episcopalian in sensitivity for that to really be an option. I don’t like really sweet cereals, but granolas are often quite sugary unless you want to pay top dollar (and most of my dollars are bottom dollars) for some organic, European blend. Then I spied Ezekiel 4:9. Knowing full well the context of the reference should’ve given me pause, but it was two dollars less a box than some of its competition—downright exilic prices—and my curiosity was roused. What would Ezekiel eat?, I asked myself.

Most people don’t realize that so many of us eat breakfast cereals due to the efforts of our Seventh-Day Adventist friends. Adventists, in addition to being literalistically inclined, advocate healthy living. Will Keith Kellogg, a faithful Adventist, believed that eating cereal for breakfast was healthy and widely promoted the idea through the company he founded to produce cereals. Kelloggs does not produce Ezekiel 4:9. Food for Life, an organic bakery, are the purveyors of this organic breakfast. Their religious convictions, if any, aren’t evident from their website. Just about the time I’m climbing aboard the bus, I know that even as Ezekiel saw the wheel, I’m in for a moving experience. Isaiah-os or Jeremiah Flakes may be difficult to imagine, but with Ezekiel nothing really surprises. Today’s Bible lesson may be as close as the larder shelf. I just skip the cooking on dung part.

When does religion itself cross that invisible line into becoming the object of idolatry? In a world of an entire marketplace (“bazaar” might be a better word-choice) of religions, where each consumer selects his or her product, some take that choice with such conviction that the religion itself becomes their god. In ancient times religion was often a matter of ensuring that the gods were not angry. The average citizen had little control over this since the religious life of city-states and nations was the responsibility of the priesthood. Just pay your temple taxes and shut up. A religion anyone can live with. Last night as we discussed Jeremiah’s temple sermon in class the point became clear: even the God-chosen, fully approved temple in Jerusalem could become an idol.

Watching political candidates and parties and factions of parties posturing (apart from reminding one of peacocks and other showy birds) for possible election, they fly high the flags of their faith and hope that the market favors their brand. It is clear among many of their constituencies that the religions themselves have become objects of worship. How else can the rancor among a deeply divided Christianity (as only one example) be explained? Families and friends are torn apart by a common faith while ministers with the dubious benefit of seminary egg them on. Having been subjected to seminary as both student and instructor, I tremble when I think how clergy are trained. A holy nationalism pervades religions, transforming the faithful into armies that some, unfortunately, end up taking literally.

All the endless debates about religious violence and evolution and abortion should have taught us by now: no one has God in the witness stand. Our religions are our best guesses, no more, no less. In the face of great uncertainty many turn to the bravado of a faith that is willing to murder in order to prove its point. If God is really watching all this, perhaps a humble acceptance might be more appropriate? I think old Jeremiah might have agreed. Of course, he likely died at the hands of his own people who didn’t like his version of religion. That’s where the prophets have gone.

Like many Americans, last year I was fascinated by Christopher Nolan’s gripping and gritty Batman film, The Dark Knight. Admittedly, the untimely death of Heath Ledger added to the poignancy of the film, but his unfaltering performance as the Joker was no laughing matter. I was transfixed. Not only was this vision of the character previously immortalized by Cesar Romero and Jack Nicholson a sea-change, it was also an epiphany.

In attempting to understand ancient religion, you can’t get far without having to address priests and prophets. Priests appear at the dawn of civilization, the establishment’s religious functionaries. They had (have) a vested interest in the continuation of the reigning power structures. Priests make their living from a population settled enough to tax. Prophets, however, have a far older pedigree. Israel recognized prophets as we all know from the Hebrew Bible, but other ancient religions also had their prophets too. Prophets were religious functionaries from outside the established power structures — they challenged conventions, demanded radical changes, and caused migraines for more than one priest. The prophet seems to have evolved from the shaman. 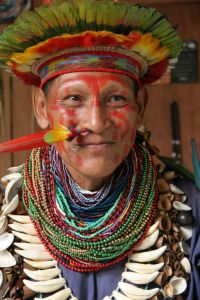 Not a Joker! An Amazonian shaman

The shaman was what anthropologist call a “liminal character,” an outsider. They simply do not play by society’s rules, but they are feared and respected by society. The shaman may see or hear things that are beyond the perception of your average citizen. The shaman may be dangerous. This is what I saw in Heath Ledger’s Joker. A disturbing character who challenges and yet at the same time brings focus and resolution to a fractured society. A wounded healer. He represents a fossil, a shaman in twenty-first century Gotham. The other Jokers, Romero and Nicholson, didn’t quite attain this level of spiritual catharsis. Although I knew Batman was the good-guy, the Joker, laughing when he should have been crying, the agent of chaos, was the most religious character in the movie. He was the Dark Light to Batman’s Dark Knight.