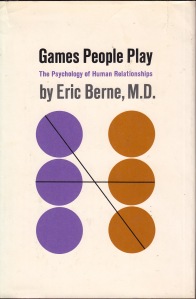 Mirrors can be such deceptive things. In my head I’m a much younger man than the one I see staring at me. And I have to remind myself that other people see what the mirror sees, and not what I really am. Things age. A friend who aged so much that she’s no longer alive recommended to me years ago Games People Play, by Eric Berne. Of course I’d heard of it before—I wasn’t born yesterday. I do enjoy reading psychological books. Psychology like having a window in someone’s forehead. If you could really master it you’d understand so much of what seems a mystery to people like me. But it is an old book. When Berne casually cites the year he was writing it as the year I was born, I began to suspect that some of the data might be outdated. The guy in the mirror certainly seems to be.

We still play games, though. The hope Berne expresses in the last chapter is that we might get beyond this endless game playing to true awareness, spontaneity, and intimacy—the things psychological games are meant to mask. I also have to confess to recognizing myself at several points and then reading that games are played by disturbed people. “So that’s why I x, y, or z,” I found myself thinking. Disturbing thought. And these ideas are as old as I am. Probably older.

Reading this book from ‘60s, I noticed a strong sense of certainty that is now lacking. I can’t imagine too many psychiatrists or psychologists making quite so many declarative statements these days. I know it’s a classic in the field, and I know there are some valuable insights here, but we don’t call people “squares” any more, and a good deal of the analyses point to assumed gender roles that we now know are as much fabrications as the games themselves. I was looking for a game that my departed friend had pointed out to me. We both knew a man who was apparently picking fights because he wanted to leave his job but he couldn’t bring himself to do it. “Stamp collecting,” she called it. She may have been right, and I have to wonder if many of us really know why we do the things we do. Maybe I could use a window into my own forehead. Of course, I would need the mirror to see it. It’s a little game I play. 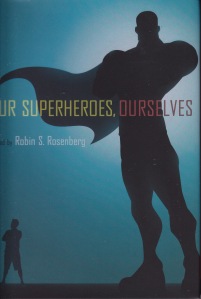 Intellectuals often have difficulty, it seems, taking popular culture seriously.  I remember feeling slightly guilty taking a class on Science Fiction in college and actually getting credit for it.  At the time—I remember the Dark Ages—a course on comic books, or even superheroes, would’ve been laughed out of the academy.  And not in a good way.  Monsters, likewise, were considered the opiate of the small-minded.  I’m not sure what happened to turn all of this around, but I think my generation growing up may have had something to do with it.  Scholars began to pay attention to more than the cheap paper and eye-catching, if impractical, costumes.  There were, unnoticed by standard readers, messages embedded in comics.  Superheroes may have been telling us something about ourselves.  Now tenured professors can write about various caped crusaders without fear of ridicule.  Some of the books are quite good.

Robin S. Rosenberg’s Our Superheroes, Ourselves, is a rare example of a uniformly fascinating edited volume.  Contributions from a variety of psychologists and psychologists explore several of the deeper aspects of  the superhero phenomenon.  Insightful and thought-provoking, this little book gives the lie to the frequent admonition of my youth that reading such things was a waste of time.  Anything but.  Now, I didn’t have the level of commitment to comics that Big Bang Theorists do, but I recall being entranced by much of what I read.  Some comic panels are still vivid in my head, although I haven’t seen the original in more decades than I’d like to admit.  They are, as one of the essays suggests, a form of modern mythology.  Another form of modern mythology is the movie.  Superhero movies are discussed as well as the print versions.  These cheap, easily read books were more, it seems, than meets the eye.  I’ve fallen a little behind in my superhero movies, but perhaps it is time to start trying to catch up with Superman.

What is really striking, to me, is the discussion of super-villains.  As more than one contributor points out, you can’t have a superhero without the nemesis of an arch-criminal.  This quite naturally leads to the discussion of abstracts: good and evil.  Early comics tended to be Manichaean in this regard.  In our world evil may be much more subtle than it appears on the outside. The book appropriately ends with a reflection on morality. More than one ethical system may be found in superhero tales. Super-villains, apart from becoming role models for some political candidates, allow us to explore our own dark sides. In the end, however, we know that Batman must overcome the Joker, no matter how appealing he may be. 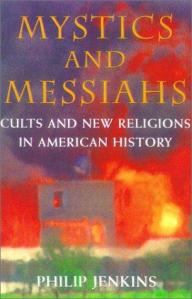 It is difficult to know where to begin when discussing Philip Jenkins’ Mystics and Messiahs: Cults and New Religions in American History. As a student of religion I early found myself drawn to the question of where religions begin. In the case of many religions we have an identifiable founder. Frequently that founder ends up being a god him (or more rarely) herself. In order for any putatively revealed religion to attain any credibility, the ultimate source must come from on high; God himself. So it is that we look askance at any religion that has appeared in the last couple of centuries, when, as we knew at the time, the earth was no longer the center of the universe and science had taught us to know better than to accept the old-timey stories of a god in the clouds. We can accept the ancient, time-honored stories, venerated as they are by centuries. If someone today tells us that God has spoken to him or her, we refer them to psychiatrists first, and then to the mind-altering drugs.

Jenkins, writing in the shadow of the tragedy of the Branch Davidians at Waco and the ritual suicide among the members of Heaven’s Gate (one of the members’ sons was one time a student of mine in seminary), tries to demonstrate that such groups are part of the fabric of religion. What is new in such movements is not the fact that they suddenly come into existence, or that society reacts violently to them, but that we now have a concept of “cult” to label them. Jenkins convincingly illustrates that fear of new religions stretches back for centuries. Even in the seventeenth century people experimented with new religions. When they survive, they become “churches.” Consider the Mormons, the Seventh-Day Adventists, and the Pentecostals. They all began as “cults” and are today considered just another variety of Christianity. Most adherents to religions do not inquire too closely as to the origins of their brand. Historically we know that the three denominations mentioned above are well under two hundred years old.

In a fascinating twist, Jenkins describes how the Zeitgeist of the early twentieth century was ripe for such developments. One of the sources, ironically, was the fiction of H. P. Lovecraft. His weird stories often invoked cult-like groups devoted to unusual practices that sometimes turned deadly. Also during that same time period, Christian Fundamentalism began as an effort to sort out what was “fundamental” to Christianity that set it apart from the cults (including Pentecostalism, now one of the most dominant Fundamentalist sects). As Jenkins points out, when these new sects become mainstream, they vehemently seek to destroy all new comers. Christianity began as a cult in the eyes of both Jews and Romans.

Religions are inherently conservative. As we will see in the approaching election, the religious background of a candidate plays a major role in public acceptability. We enjoy freedom of religion in the United States, but only to a point. Jenkins should be required reading for every religious believer. Tolerance would be the only proper and reasonable response.