I can’t recall how I learned about Andrew Michael Hurley’s The Loney, but it was one of those books I knew I wanted to read.  One thing I do recall is that I didn’t know it had anything to do with religion until I started it.  It became quite clear that the story—which is difficult to classify—revolves around religion and a kind of gentle horror of things not being what they seem.  Set on a lonely stretch of English coastland where strange things happen, a family takes their mute son to a shrine to have him healed.  The younger brother, not mute, narrates the events.  There are many creepy suggestions of what may be happening, but a full explanation is never given.  That’s kind of like religion itself.

While I don’t normally read the discussion points or classroom/book group discussion material after most modern novels, I found Hurley’s included essay on “Nature, Faith, and Horror” to be of interest.  Several of us, it seems, find the combination of religion, or faith, ties in well with fear.  That was a large part of what I was trying to get at in Holy Horror.  Hurley goes in a different direction with it.  A family under the overbearing religion of the matriarch does her bidding in the hopes of either keeping peace or participating in the healing her son.  We learn from the opening pages that her son Hanny develops into a minister, and therefore has some degree of normalcy.  Hurley is a master of revealing important factors only gradually.  It keeps the tension rising as the story goes along.  There’s no bloodbath, but there is unsettling mystery.

The story is probably best characterized as gothic.  That’s rare these days, and it is the sub-genre of horror that most attracts me.  The mood it casts is kind of a spell and it’s difficult to break.  The Smith family insists on the sacredness of place and on strict religion of the Catholic species.  Evangelicalism could easily lead to horror, and not infrequently it does.  The Catholic variety, however, feels older.  More arcane.  There are things only a priest knows.  And that knowledge can be a challenge to both the knower and the seeker.  The Loney will leave the reader with questions ticking away about what really happened.  These are things we’ll never know.  Those of us who’ve ever entertained religious vocations understand this feeling well.  It stands behind certain kinds of horror and in front of religion, tying them together.

Although I haven’t been writing much on horror here lately, I’ve been doing my homework.  At least for homeroom.  Horror Homeroom, that is.  I’ve published on Horror Homeroom before, and, surprisingly, they’ve let me do it again.  This piece is on the films of Robert Eggers.  It’s pretty unusual for me to get in on the ground floor with a director’s oeuvre, but my wife has a tolerance for what is being called “smart horror” or “intelligent horror,” or even “transcendent horror,” and so we can get to the theater to see movies like The Witch and The Lighthouse before they go to DVDs or Amazon Prime.  In order to write up my thoughts about these two films I had to rewatch them a few times.  There’s so much going on here that both stories are difficult to summarize.

Holy Horror treated The Witch in the context of its biblical worldview.  The Calvinistic religion of William, and by extension, his family, is pretty scary stuff.  In The Lighthouse we find two men each grasping for their own ideas of the divine, as found atop the eponymous structure they inhabit.  Both films explore the psychology of isolated individuals, and, perhaps not surprisingly, finds frightening things.  We are social creatures, even those introverts among us.  When deprived of the interaction of those who think differently (hear this, o Republicans!) we soon begin to wilt.  We need not agree with all we hear, but conversation cannot be had without being open to at least the possibility that one might be wrong.  Nobody wants to think they are incorrect, but unless they can admit that possibility, there will be no discussion, by definition.

Horror quite frequently thrives on separating people from their fellows.  One of the fascinating aspects of the genre is the way in which it does this.  Groups, even, that separate themselves from the rest of humanity soon begin to behave in odd ways.  Checks and balances are necessary for any health in a society.  Those who claim absolute positions often can’t admit this.  Do I hear the violins of Psycho coming to life?  I suppose community is why I try to publish once in a while in wider venues like Horror Homeroom.  Even people who like to watch horror prefer not to do so alone.  Maybe having seen The Witch and The Lighthouse in theaters was a crucial part of their impact upon me.  And what is a good shudder without someone with whom to share it? 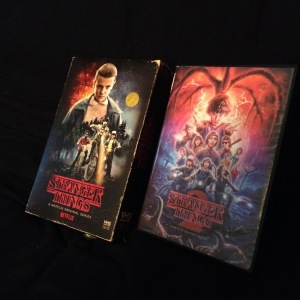 Like many fans of the X-Files and the early years of Sleepy Hollow, I’ve fallen into the Stranger Things orbit.  While I don’t have a Netflix account, I have friends who do and they got me hooked.  If you’ve watched it you’ll know why, and if you haven’t I’ll try not to give too many spoilers away.  The reason I raise it now, when we’ve gone such a long time without a new season, is that Stranger Things 2 took on shades of The Exorcist, but without any of the attendant religion.  Secular exorcists do exist, and possession is a feature of cultures with all different kinds of belief systems.  Exorcism works based on the belief system of the possessed, it seems, and if there’s no religion there’s no problem—call a secularcist!

Spoiler alert: Will is possessed by the mind flayer.  As the authorities flail around and get eaten by demidogs, his mother figures out how the exorcism has to work.  The thing about possession is that nobody really knows what demons are.  Dungeons and Dragons, which I confess I’ve never played—my life is too complicated already, thank you—gives the analogy for the possessing entity.    No matter what the demon, however, the only way to get it out is through exorcism.  Quite apart from sci-fi and fantasy, this is also the case in real life.  Part of the appeal to Stranger Things, I suspect, is that it indulges in the mysterious without the burden of religion.  While religion makes for good horror, good horror may exist without it.  Or can it?

Contrast this with Sleepy Hollow, now defunct.  Possession was a trope there as well, but the story had obvious elements of religion embedded in it.  As I point out in Holy Horror, religion often drives the fear.  That doesn’t mean it’s the only driver.  People fear being taken over by something else.  Stranger Things knows that if nobody can really figure out what that something else is, it can be scarier still.  We know it comes from the upside down.  We know it can possess people.  And we learn that it can be exorcised.  Although the setting is completely secular, there are elements of religious thinking even here.  It’s simply part of the human psyche.  We can deny it exists.  We can try to describe it only by analogy.  We can try to exorcise it.  It is there nevertheless, even as we eagerly await the advent of the third season.