A few thoughts about the March for Science in Manhattan over the weekend seem to be in order. To get to the rally in time, from our little corner of New Jersey, we found ourselves on an early train. We arrived at 62nd Street and Central Park West to discover the march was beginning just outside of one of Trump’s unimpressive towers. The area for marchers was clearly marked off by barricades, but a woman walking her dogs, a resident of Trump’s tower, wandered in among the crowd. Like most Trump followers, she seemed clueless that there was an obvious way around the obstacles and had to be helped by the police. Seems to be a theme with 45—police are everywhere watching his assets. Meanwhile the hotel doormen from next door were asking for “Resist” paraphernalia and reminiscing about their shock when the boy next door received the nomination. The mood was jovial despite the spitting rain. 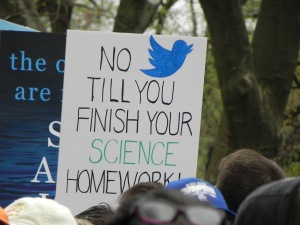 The speeches at the rally were mostly given by children ten and younger. The future teaching the past. As might be expected, the signs were clever, and some took considerable thought to figure out. A few, it seems, felt religion was to blame. Well, they’re probably right about that. One gets the sense that science and religion are like cats and dogs, and nobody has to guess which one’s identified with the cats. Still, the majority of the signs pointed out the benefits of science. Even scholars of religion use the scientific method, believe it or not. Like science, religion (as revealed by science) may be good for people. Who brings religion to a science rally?

I’ve always been a fan of science. Throughout school I learned a lot and did well in physics and chemistry, biology not so much (dissection was never my thing). I still read science and incorporate it into my thinking. Balance, however, suggests perhaps religion also be treated as not evil in and of itself. After all, it is evolved behavior. As the march progressed down Broadway, we passed a church that had a prominent banner reading “Prayer really does work,” or something along those lines. I’d seen enough clever signs already that morning to notice this contrarian voice. Then I wondered, why can’t science and religion seem to get along? Both can (but need not) make exclusive truth claims. What’s wrong with admitting that we just don’t know? Belief is involved in either case. No doubt science is important. I’ve always supported its study and always will. Is it, however, too much to believe that maybe religion can also enlighten, if understood for what it is—a human way of coping with an uncertain world? As science marches on, hopefully it will help us comprehend even the unmeasurable.

They used to call her “Mother Earth.” Now she’s simply a commodity to be liquidated into cash at the country club where rich white men play. That’s why I’m spending Earth Day on my third protest march of the year. Of all the things the Republican Party has done to show its true colors the clearest has been to participate in the destruction of the world we all share. There’s only one word that answers the question “why,” and it used to be considered one of the seven deadly sins. Greed. These acts of planetary terrorism are carried out by men who believe lining their own pockets is the highest possible good. Even moderate Republicans have locked in their goose step to keep in the good graces of madmen who want to cram as much lucre into their coffers as they can before they die. When the planet’s a smoldering ruin their grandchildren will surely thank them. 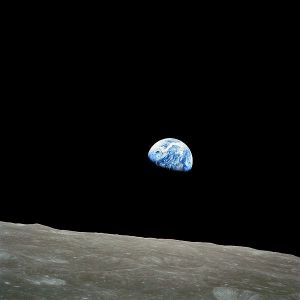 Don’t knock tree-hugging unless you’ve tried it. Trees tend to be much better company than Republicans anyway. Never have I had the feeling that I’ve had to celebrate Earth Day with such a blend of angst and anger. That one that your teacher always warned you about—the one who ruins it for everyone—now has control of the country. Immediately he insisted we start dumping coal waste into our streams and rivers. Burn more coal so he can play a few more holes with what passes for a clean conscience in a filthy soul. I march because I must. We can’t sit silently and let the darkness fall. If you can see through the coal dust you’ll understand that the planet weeps. It’s her that we celebrate today.

Matricide used to be considered a heinous crime. Now it’s just good business. If we were an honest species we’d admit it’s been bad business from the beginning. We’d never elect a businessman with inherently conflicting interests to the White House. The goods of the few outweighs the good of the many. The commodification of nature is the worst kind of unnatural selection. Here science and common sense agree—in order to survive we must preserve our planet. I confess that I’m unapologetic in this regard. So, although I’ll be spending this Earth Day in the artificial environment of Manhattan, marching in the cause of science, and if push comes to shove I’ll be the one hugging a tree.