In celebration of Banned Book Week (go ahead, let your hair down!), I thought I might muse about some good news.  Since I already posted on my banned book (Slaughterhouse Five) I need another angle of approach.  One of the less envious aspects of being an editor at an academic press is being yoked to facts.  Many authors have a basic misconception about numbers in their heads.  They think their book will sell on the scale that Barnes and Noble, such as it is, will stock them on the shelves.  I have to admit that I dream of walking into a bookstore and finding one of my titles on the shelf—and I know it’s not likely to happen.  Those of us who work in publishing see the hard figures, how many copies have actually sold.  And the results can be quite sobering.

The news isn’t all bad, though.  I ran across an article by Andrew Perrin titled “Who doesn’t read books in America?” and the way the question was phrased made me think.  I’m used to thinking of it the other way around: how many people read, or buy, books?  I once read that about 5% of the US population constitutes the book-buying market.  Now, that is a large number of people, even if it’s on the smaller end of the overall spectrum, but Perrin’s article from the Pew Research Center states that only 24% of Americans state they haven’t read a book, whole or in-part, over the past year.  This, I think, is cause for celebration.  It means more of us are reading than are not, even if we don’t always finish the books we’ve started.

Think of it like this: whether print or electronic, people know to turn to books for information.  Oh, there are all kinds of details I’m leaving out here—the safeguards of a reputable publisher over the self-published manifesto, as well as the self-published brilliant book over what managed to squeak through the review process at a university press because an editor felt the pressure of a quota—but the numbers are encouraging nevertheless.  Looked at this way, more people are reading than are not.  And the best way to promote books is to suggest they should be banned.  That’s why I don’t despair of the shallow books praising Trump—if they’re banned they become prophetic.  Academic books, my colleagues, don’t sell as many copies as you might think, even if they’re not banned.  The good news is, however, that we haven’t forgotten whence to turn for knowledge.

Banned Book Week technically doesn’t start until the week after next, but I have a pathological fear of being late.  I don’t know why.  It could be that I’m aware time is of limited quantity and much of it is owed to the beneficent corporation that keeps you alive, so you have to trade it for food.  And books.  Not much of it is left to do what you want to do.  In any case, my last book for the 2018 Modern Mrs. Darcy Reading Challenge was in the banned book category.  Long ago I had decided it would be Kurt Vonnegut’s Slaughterhouse Five.  I’ve read it before, of course, but it had been long enough that the details had been sanded away and I could only remember parts.  One thing I’d forgotten is how much Vonnegut brings religion into the story.

Writers who avoid religion miss the motivating factor of the majority of human beings’ lives.  This has always seemed a strange denial to me.  I’m not suggesting that every novel should mention religion, but since it is concerned with ultimate interests, it is somewhat surprising that it’s so often overlooked.  Not that it plays a major role in Slaughterhouse Five, but any novel concerned with death is inherently in the realm of ultimate concerns, I should think.  Right, Dr. Tillich?  In any case, I’d forgotten that Slaughterhouse Five was such a poignant, funny, and sad novel.  Vonnegut’s experience of World War Two clearly haunted him—most writers are haunted by something—and his musings were, and often are, banned.

If there were banned books in my high school (and I grew up in a conservative area, so surely there were) I didn’t know about them.  Let’s face it, teens seldom sit around talking about significant novels.  Many, at least among my classmates, didn’t read those that were assigned in English class.  Slaughterhouse Five wasn’t one of them.  I learned about Kurt Vonnegut from a friend while in college.  This is the third of his novels that I’ve read in 2018.  The first two I’d never read before.  So it goes.  I’m keenly aware of time.  I’m also aware that those who would ban books are often those who obtain elected office.  And when you find that your own nation has turned on you, remembering the fire-bombing of Dresden is an appropriate response.  For such reasons Banned Book Week remains important.  It should be a national holiday, at least among those of us underground during the firestorm. 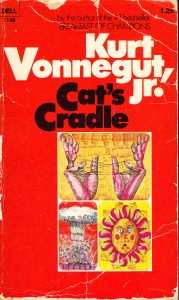 Kurt Vonnegut was never required reading in my high school English classes. I read Slaughterhouse-Five when I was in seminary, and picked up a few of his other titles in the dearly departed Boston Book Annex. A couple of these used books have been waiting patiently over the decades, and so I selected Cat’s Cradle to be perhaps the last book I finish this year. As far as I can recollect, the Vonnegut books I purchased while in seminary had no particular order or reason. A friend had recommended The Sirens of Titan, but Cat’s Cradle was what would now be called an “impulse buy.” Reading it, I rediscovered why I like Vonnegut so much. I also found out the book revolves around religion.

Regular readers know that I tend to find religious themes in secular books. It’s partially human radar and partially an unfortunate occupational hazard. Occasionally I’m pretty certain the author had no intention of including or developing the themes I discover. Cat’s Cradle, however, places religion front and center. The story involves a journalist on the trail of one of the developers of the atomic bomb. He unintentionally coverts to Bokononism, a religion made up by a castaway on the island of San Lorenzo. The religion, based on the teachings of a still-living sage, revolves around the idea that all its sacred writings are lies. Think about that a moment.

Lies, in which we’ve all had a crash course since January, are among the most insidious of human accomplishments. We value and crave the truth. We all believe that we believe it, but there are differing opinions as to what it is. Some opinions are backed with evidence, and others with flimsy fabrications. To declare a religion based on lies is, of course, to undermine the whole enterprise. Vonnegut was a noted iconoclast, but there’s a brilliance in declaring a religion to be knowingly based on falsehood. In fact, we’re seeing it happen before our very eyes. The religion formerly known as Christianity, once upon a time, took into account the teachings of Jesus of Nazareth, as recorded in the gospels. Modern Christianity—Evangelicalism—has completely thrown Jesus out of the equation in all but name. Branding, after all, is everything. This modern faux religion suggests hating your fellow creature, taking advantage of the poor, and believing falsehoods to be the most sincere of truths. It’s alive and released on the earth even now. And it is far more scary than even ice-nine.

It should be a scarlet letter week. In honor of Banned Book Week, I’ve started to re-read Kurt Vonnegut’s Slaughterhouse-Five. Somehow I made it through high school and college without having been exposed to Vonnegut. A friend started me reading his works when I was about ready to start my Master’s degree, and I’ve always enjoyed coming back to him. When my daughter asked me why Slaughterhouse-Five had been placed on The List, I honestly couldn’t guess. Banning books, of course, is a scheme chiefly intended to keep children unexposed to ideas that adults find uncomfortable. We can’t go around telling other adults what not to think (although that hasn’t stopped many a religious tradition from trying), so some individuals figure that we can protect our unthinking young by putting in the corner literature that asks awkward questions. More radical conservative elements suggest destroying them. These are the true grapes of wrath.

Ideas can be wonderfully dangerous things. We now face a brave new world of internet access where ideas float lightly on the web and unless we watch our children constantly, we can’t control what they might see. Ideas as traditionally expressed in literature go through a tremendously long and convoluted birth process. We even use the language of conception to describe how they begin in one’s mind. Ideas implant, gestate, and grow. For the writer this might represent weeks, months, or years of writing, erasing, re-writing, and yes, parenting the idea. The written book has to meet the approval of publishers and only after yet another editing process are they pronounced fit to see the light of day as books. Having passed through many hands, many heads, such ideas become part of their culture. If we find them objectionable, well, isn’t that just part of life? Perhaps that is the largest message to be gleaned from the world of books: no one will be pleased with them all. Even the diary of a young girl will raise alarm.

Some of the finest literature to escape human minds has been challenged or banned. Ironically, in the land of the free and the home of the brave fear of books runs at a fever pitch seldom encountered elsewhere. Afraid of mice and men. What has made this country such a wonderful experiment—the embracing of diversity—has somehow morphed into a neighborhood where nobody feels safe if there are objectionable words on the bookshelf. Ironically Ray Bradbury’s critique of banning books, Fahrenheit 451, is itself a banned book. What most proponents of stopping literature probably don’t realize is that according to OCLC, the source for library data, the most banned book of all time is the Bible. To be honest, those who’ve read it know that it has sex and violence and many other adult situations. In the original languages there are even “swears.” Maybe it’s time people just grew up. The best way to accomplish that is to read a book. Hey, it’s a jungle out there.