Fall creeps up on me every year.  I like to have an array of seasonal books to read so that when it arrives I’ll be ready.  With house repair costs this year I’ve had to curtail book buying.  That, and most of the titles on my to-read list are used books that seem to have become extortionately expensive since the 1970s.  In any case Cherie Priest’s The Toll stood face out on the shelves of Buffalo Street Books in Ithaca and it caught my attention.  Set in the Okefenokee Swamp in Georgia, this unsettling novel brings the reader into the liminal space of the dying small town.  There’s a bit of magic in Staywater, although everyone who lives there knows it hasn’t got long before it goes altogether.  And every thirteen years a monster comes.

Priest knows not to describe the nameless creature too clearly.  The monster seen in broad daylight can quickly lose its patina of fear.  This is some kind of supernatural swamp beast and everyone local seems to know it’s picking them off.  The outside authorities, however, pay no attention to small towns that have “nothing to offer” to the greater economy.  That aspect resonated with me as the erstwhile denizen of a community of less than a thousand.  I watched the dissolving of my adoptive hometown as the tax-base shrank to the point that they could no longer afford to pave the streets and decided to go back to gravel.  Once the oil refinery—what gave the town “value”—closed, outside interest disappeared.  Ah, but I digress from fiction.

The Tool is a moody novel that doesn’t take itself too seriously.  There’s backstory here that remains untold.  Two of the protagonists are elderly female cousins who are comfortable with the spiritual world.  They are the past saviors of this little town in the swamp.  The other characters have all come to an uneasy peace with their periodic tormentor and they have nowhere else to go.  When the monster strikes against unwary outsiders the locals don’t welcome outside attention.  Those acquainted with small communities know that’s what life is like.  Attention brings cash, but often unwelcome change as well.  One of the more haunting aspects of this novel is the number of threads left dangling in the wind.  Not everything is resolved, and life goes on much as it always has, without or without the monster.  A moody read, this ghost story has, it is clear, a deeper message.

I’m not inclined toward hero worship. Sometimes I think it must be a personality flaw on my part. The cult of celebrity is so pervasive that I feel desperately behind the times when I read what web-savvy authors write. Or maybe the truth is that my heroes live closer to home. Or lived. I grew up in a small town as the child of a working-class couple, both of whose sets of parents were not educated beyond high school. We were simple folk. We didn’t have much money and we didn’t have elaborate demands. My mother put up with an alcoholic and then absentee father, raising three children largely on her own for the better part of a decade. (She eventually remarried and the three became four, but I want to focus on the early part of the story today.) She had a rough life. Her hero, not surprising for an only girl with four brothers, was her father. Her admiration for him, whether genetic or via learning, passed on to me. I can’t claim to remember him since my grandfather died just before I turned two and just before he turned 75. As I grew up, however, he became my hero. 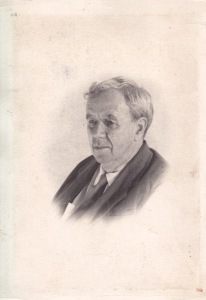 Today would have been his birthday, and I’m thinking about Homer Sitterley, my hero. He grew up on a farm in upstate New York and tried to better his circumstances. He taught in a one-room schoolhouse, which you could do in those days without a college degree. He also met my grandmother in that schoolhouse, which you could also do in those days. He had to change careers and became a civil engineer—still with no degree. He started and supported a family of five and moved around the country trying to keep his spouse happy. Back in the 1920s and ‘30s they moved from Virginia to Montana and back to the east, eventually settling in New Jersey, where my mother was born. They finally moved to Pennsylvania where my three brothers and I were born. He died there in August of 1964.

Homer Sitterley may have never worn a cape like one of his silly grandsons did in college. He didn’t have any super powers beyond the strong will to survive in a hostile and thankless world. He never grew rich despite hard work and few outside his family knew his name. He is a hero nevertheless. His kids were upstanding people: religious, polite, and kind. Their children—my many cousins—are good people. In a world where superheroes are shown increasingly as flawed, the real heroes are simply human. And my personal hero, although he never knew he was—and is—was a man who cared for his family to the very end. He was only human. And all the more heroic for being so.