Not talking to strangers is something that takes time to grow out of. Somewhere in the back of my mind lurks that fear of when my mother told me what to do if someone tried to grab me as a child. Stranger danger, we now call it. I seldom strike up conversations with those I don’t know, but I’m glad to respond if someone speaks first. So it was that I found myself at the checkout of a Walgreens drug store answering questions about my coat. Well, not exactly my coat—I still have a protest button and a safety pin on it. The safety pin is a symbol adopted in the wake of Trump, and is just as sorely needed now as it was when Pantsuit Nation began the trend. The button is outdated, from Stand CNJ. My wife and I attended the meetings of this grassroots activism group for several months, until they started meeting on weeknights. For commuters that’s the kiss of death. 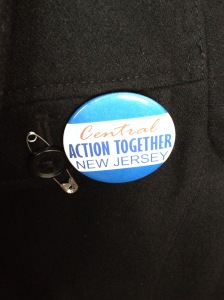 The woman at the checkout asked what Action Together (the outdated name) was. Caught off guard—I was trying to remember my PIN—I said off-handedly that it was a group for addressing social causes. “What kinds of social causes?” she asked. I couldn’t tell if she was asking because she wanted to join or to challenge. Fight or flight? I punched in my number and mentioned a couple of social justice issues that I thought might appeal, such as fair wages. An older person, she was likely a minimum wager, so I was a little surprised when she said, “If you raise our wages, prices will go up, and it’ll just get worse.” I’m no economist, but I’ve noticed throughout my life that prices go up regardless of wages. I can remember when gas was 27 cents a gallon. My first several jobs were minimum wage. I wasn’t quite sure how to answer her. Here was a woman victimized by the economy and yet she, like Winston Smith, apparently loved Big Brother.

One of the strange things about social activism is that you end up trying to help people who don’t want to help themselves. The poor have been convinced that billionaires and woman-gropers look out for their best interests, financial and moral. Even when they pass a budget that will cut off their own life support, they still believe. Those who want to help are the enemy. When the Party says jump, we know what to answer. And who is Julia anyway?

Monstrosity and religiosity are sacred siblings. Both are focused on that which is outside—the Other. Now, I have to confess being a bit rusty in my philosophy reading, and I sometimes wonder how I made it through three degrees without ever really encountering post-modernism in all its complexity. Reading Richard Kearney’s Strangers, Gods and Monsters (Routledge, 2003) was therefore a challenge. Like many of those raised in an uncompromising religion, I am innately attracted to monsters. Maybe it was the vivid images of Hell and its denizens; one of the earliest nightmares that I remember was of being dragged to Hell. Some authors suggest Revelation gave Christianity its monsters, but, as Kearney suggests, the connection goes back much, much further.

We fear what we embrace. It is the old division of sacred and profane—a line that has blurred considerably over time—that gives us our monsters on a separate plate from our deities. Otherness contains within itself both bane and blessing. People fear that which differs from them, a fact demonstrated every day by racism, sexism, and homophobia. At the same time, many look to the ultimate alterity for salvation from the mundane. God is just as “other,” more so even, than any human or monster is. Any creature/creator beyond the reach of our feeble grasp should be considered dangerous in our view of the world. And yet the further we get from the middle, the more the ends seem to come together in an ouroboros of divine monstrosity. Those who read Kearney need to be prepared.

While not taking on monsters as I expected he would, Kearney does address them with a sensitivity appropriate to the recognition of the closeness to deity. Nowhere is this clearer than in his superb chapter on melancholy. Being caught between the monstrous and the sublime, the melancholic learns to cope with a disinterested sadness that at times borders on insanity, yet produces flashes of light often more brilliant than those who think their way through problems. This is the affliction of Hamlet who stands on the cusp of being or non-being. For all who believe in a divine power, a strong divide must separate that realm from ours. That same realm, however, also contains our beloved monsters and strangers of every description.