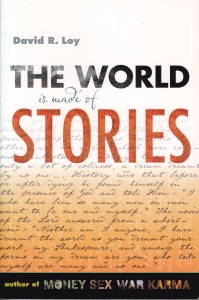 Although I’ve not formally studied it, Buddhism has long been part of my thought process. Like Thomas Merton—and this may be the only point of comparison between us—I find little difference between the contemplative worlds of Buddhism and Christianity. Mindfulness knows no denominations. I suspect David R. Loy’s book The World Is Made of Stories would cause anxiety for some. Those not comfortable, for example, with paradox. Or those who believe that only the literal is meaningful. Separated by the vast land mass of Asia, eastern and western ways of thinking about the world—telling their stories about the world—diverged widely in antiquity. There was a kind of “rediscovery” of south and east Asian thought in the late nineteenth century western hemisphere. Since then occasional famous explorers such as the Beatles, or professional practitioners such as the Dalai Lama, have brought Buddhism’s ideas to the mainstream, but because they coexist well with Christianity there has been no cultural reason to displace them.

I found Loy’s world compelling. All is narrative. That’s the way human brains work. If you’re reading this right now, you’re following my narrative. If you’re not really paying attention, another narrative has gripped you. Science is a narrative just as religion is. It is the way we think. The internal monologue. Consciousness itself. Stories. People will follow a story quite naturally, which is one of the reasons it’s such a shame so few people read for pleasure. We can watch our stories (what is a sporting event but a narrative playing out before a fan’s eyes?) and many people do. The written story often, however, takes us deeper.

Contemplation is an endangered species. Although I found the enforced quiet days at Nashotah House (such as Ash Wednesday) to be an onerous rule, I would arrive home with little to say in any case. The world of busyness that we’ve made our business can choke the meditative spirit. Although some workplaces offer yoga sessions (themselves based on Hindu spirituality) they hardly encourage meditating at your desk. It seems the natural enemy of productivity when, in reality, it increases it immensely. Who doesn’t work better after a vacation? The business world often presents the religious life as one of indulgent non-productivity. I remember being made to feel stupid asking for one Good Friday off while working my first full time job in retail. When cash transactions grew to be too much I’d find a church on my lunch hour and just sit. Now I only find time to read Buddhist books on the bus on the way to work. Look deep enough and there’s a story in that.

Since they combine two of my soft spots—local history and ghost stories—books telling the tales of home-town specters are compelling in a homespun way. On a visit to Binghamton, New York, I picked up Haunted Southern Tier by Elizabeth Tucker at the local bookstore (I have a hard time passing up an independent bookstore anywhere). Those of us at least a little familiar with upstate New York know that the southern tier is not strictly defined, but it is a recognizable section of the Empire State that runs just north of the Keystone. I was drawn to the book by Elizabeth Tucker’s name; she is the author of Haunted Halls, a book I reviewed earlier on this blog, about college campus ghosts. These local travel guides tend to focus on the weird and whimsical, and aren’t meant to be taken too seriously. Nevertheless, the connection between ghosts and religion is tangible in just about any part of the world, no matter what one believes.

This fun read brings a number of explicit religious points to the surface. One involves the strange phenomenon of haunted churches. Given that many varieties of Christianity offer Heaven as a reward immediately following death, having a ghost hanging around a church seems strangely disingenuous. Perhaps that’s why few churches admit to such things. Another interesting tie-in to religion comes in Tucker’s section on roadside ghosts. Stories of spectral hitchhikers are quite ancient, but I had never considered them biblical. Tucker mentions one such instance in the Book of Acts, and upon reflection I realized that she may be onto something. The account of Philip converting the Ethiopian eunuch is one of the odder tales of the early Christian movement. Philip explains Isaiah’s prophecies to the chariot-riding dignitary who gives him a lift, and baptizes the visiting Ethiopian before mysteriously disappearing. Could this be the prototype for the vanishing hitchhiker folklore theme?

Perhaps the most serious of the religious connections in the book, however, has to do with St. Bonaventure University. For those familiar with Thomas Merton’s life story, St. Bonaventure will not be unexpected. Merton taught at the school as he was struggling with his identity that led him to become one of the most renowned Trappist monks in the world—one who spoke approvingly of Buddhism, to boot. Merton is not said to haunt the university, but his presence there at one time has endowed this Catholic school with a sense of spiritual gravitas. The ghosts come from elsewhere.

Books on ghosts are a guilty pleasure with a serious undertone. End of life issues, once we move beyond the medical, are the unquestioned provenance of religion. Whether or not there are any ghosts out there, religion will claim the final word on afterlife. And only those who experience it will ever really know.