When I was a post-graduate student in that Gothic city of Edinburgh, I decided to spend some time reading Umberto Eco’s Foucault’s Pendulum. It was intended as harmless entertainment, but as anyone who has read it knows, the story soon unravels into an unbelievable world of dark religions that haunt a naive protagonist. While I was reading it, a packet, hand-addressed to me, with no return address, came to my student mailbox. The contents consisted of several tracts, in German, warming of the dangers of Satanism. No letter, no explanation. Foucault’ s Pendulum had me paranoid already, and this strange package completely unnerved me. Well, I’m still here to tell the tale. While reading Victoria Nelson’s brilliant The Secret Life of Puppets, I learned that she had a strange episode while reading the same novel. It was an apt synchronicity.

Nelson is a scholar who should be more widely known. I found her because her recent Gothicka was prominently displayed in the Brown University bookstore in May. I saw it after taking a personal walking tour of H. P. Lovecraft sites. Synchronicity. I had read, in a completely unrelated selection just a couple of months ago, Jeffrey Kripal’s Authors of the Impossible. Synchronicity. For many years I have honed my Aristotelean sensibilities, following devotedly in the footsteps of science. Problem is, I have an open mind. It seems to me that to discount that which defies conventional explanation is dirty pool in the lounge of reality seekers. I have always been haunted by reality.

I’m not ready to give up on science. Not by a long shot. Like Nelson, however, I believe that there may be more than material in this vast universe we inhabit. Indeed, if the universe is infinite it is the ultimate unquantifiable. The Secret Life of Puppets is alive with possibility and anyone who has ever wondered how we’ve come to be such monolithic thinkers should indulge a little. For me it was a journey of discovery as aspects of my academic and personal interest, strictly compartmentalized, were brought together by an adept, literary mind. Religion and its development play key roles in the uncanny world of puppets. Those who wish to traverse the realms they inhabit would do well to take along a guide like Nelson who has spent some time getting into the puppets’ heads.

Usually I resist mentioning books I’m reading on this blog until I have finished them. It is probably because of some misplaced Protestant guilt at taking a small measure of undeserved satisfaction at claiming an achievement that I haven’t legitimately earned. Or maybe it is my innate fear that the author will say, on page 200, “by the way, everything before this is wrong.” In any case, sometimes I forget the important initial stages of a grand argument by the time I reach the final chapters, neglecting any ideas that may have arisen along the way. I just started Victoria Nelson’s The Secret Life of Puppets. I read her Gothicka earlier this summer, and couldn’t wait to get started on Puppets. Besides, when was the last time I saw an academic book with a back-cover sound-byte by Neil Gaiman?

The idea that is so compelling in The Secret Life of Puppets is that in the modern era religion and art have reversed roles. That is to say, people tend to turn to literature (and movies or other media) to discover a sense of transcendence—previously the bailiwick of religion. Religion has transformed into the receptacle of literary imagination instead of remaining the inspiration for it. New Religious Movements grow out of fictional sources—consider Scientology or Jediism or the religions growing from Avatar. But the connection runs to even more profound depths. Quoting a screenwriter she met, Nelson points out that horror movies are often the only genre of film in which God comes naturally into the conversation. Elsewhere God-talk feels high-handed.

Religion has become a kind of fiction while fiction writers preserve the prerogatives of the divine. We suffer from repressing our intuitive way of knowing. Perhaps it is only logical that I select an example from science fiction here. Since the late ’60’s the figure of Mr. Spock has stood sentinel over the neurosis of the flawlessly logical. Just one glimpse and we know this is not homo sapiens sapiens’ behavior. We think with both halves of our divided brains. Scientists sometimes commit the oh so human fallacy of supposing evolution is robbing us of passion. Falling in love would be a lot less enjoyable if it made sense. No, we have not outlived our need for the gods. I think Neil Gaiman would back me up on that. 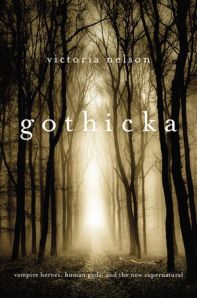 Every great once in a while, you run across a book that seems to have been written just for you. I’m cheap enough to wait for most books to be issued in paperback (and storage is getting to be an issue in our cozy apartment), but sometimes the urgency is too great and I can’t resist. In Providence a few weeks ago, I visited the university bookstore—one of my favorite places in town. On the new arrival table was Victoria Nelson’s Gothicka. For what seemed inexplicable reasons, I always found Gothic tales among my favorite growing up. Poe was a standard, but he was accompanied by other stories that elicited the same cocktail of sensations, accompanying a dark and mysterious atmosphere with a suggestion of menace. Transfixed by even the mere presence of this book, I knew I was in the power of a force to which I would eventually succumb. And, unexpectedly, the book helped to explain part of my childhood.

Not every book I read has to do with religion. Far from it. I expected Nelson to discuss literature and movies and culture—all of which she does—but not necessarily religion. The first three chapters proved a revelation in that regard. Nelson deftly explains how Gothic largely overlaps with the characteristics of religion, bringing the supernatural into human lives and insisting that we tremble before it. Perhaps best explained by pastor Rudolf Otto in The Idea of the Holy; the transcendent is something that terrifies as well as compels. In a culture where organized religion appears to be losing ground, Gothic offer the opportunity to tremble before the supernatural, and many people find it almost a religious experience. As becomes clear, the “almost” may appropriately be dropped.

Tracing the trajectory of my own reading interests, Nelson next provides an insightful chapter on H. P. Lovecraft. In many ways the initiator of worship of the dark divine, Lovecraft’s Cthulhu and kith and kin represent an undisguised secularization of deity. At the same time, the trembling is still very much present—indeed, it is a native part of the experience. Lovecraft, who was an atheist, understood the literary utility of gods. They frightened and haunted him with their very non-existence. That is power. Gothic acknowledges and embraces that power while never relinquishing its darkness. Nelson’s Gothicka holds the potential of a journey of self-discovery. As she ranges deeper and deeper into that world, the reader discovers just how much it is part of being human in a world tormented by fallen gods.