Maybe it’s the ebola in the air, or perhaps the gas from all the midterm elections verbiage, but I’ve been on a monster run this October. I just finished Matt Kaplan’s The Science of Monsters: The Origins of the Creatures We Love to Fear. It is a charmingly written book, at parts approaching the finesse of Mary Roach. Beginning with the ancient Greeks (and sometimes stepping back into the world of the Bible or the Mesopotamians) Kaplan examines the major categories of monsters and tries to offer scientific explanations for why people came up with them. It is a keen conceit and it is deftly handled. Noting that animals sometimes got jumbled in the fossilization process, he offers explanations for creatures such as the Chimera, Griffon, and perhaps even the Sphinx. Some of the unlikely episodes are quite fun to visualize as well, as when a snake slithers over a tar pit where a goat got stuck and was eaten by a lion that also got stuck. Beast after hideous beast he brings down to analytical size, sometimes convincing even this old monster lover.

One of the problems, however, is that science often doesn’t comprehend the symbolic nature of mythical thought. Quite apart from sheer creativity—and it does exist!—some of the material in Kaplan’s analysis would have benefited from having a mythographer’s look. For example, demons do not suddenly appear as monsters in the Middle Ages. Kaplan knows this, but that’s where he starts. The ancient Mesopotamians knew of them very, perhaps, too, well. And Lilith isn’t even mentioned when discussing succubi. Still, there’s a great deal of interesting conjecture here, and some scientifically, if not mythographically, viable suggestions on whence vampires and werewolves. As expected, modern sightings of cryptids are simply swept off the table, but I almost shouted aloud when I read that he gave credence to Wade Davis’s work on Haitian zombies.

The larger question here is one of approach. Do monsters lend themselves to scientific explanations at all? The case that elephant/mammoth skulls might suggest a cyclops seems reasonable enough, and the occasional dinosaur bone that represented a giant in ancient times is entirely possible. (Who can tell one femur from another anyway?) But the monster is primarily a creature inhabiting the shadowy realms of religion and psychology. Our fears are seldom directed toward science, although, now that I’ve read his chapter on “The Created” I’m not so sure. Constructing backward toward the unknown is always a dicey proposition, as those of us who’ve studied history of religions know. We may be able to find the genesis of modern monsters, but, admittedly, the fun for most of our scary friends is that they are mysterious. Impervious, as it were, even to science.

The origins of zombies notwithstanding, they are the autumnal monster of choice in a post-modern society. They are the symbol of secular resurrection—no faith commitment is required, no pristine, moral lifestyle. Resurrection happens to you by accident, a chemical, a disease, cosmic radiation—whatever the cause it is not divine. And the zombie is fair game for the release of violent aggression; already dead, there is no moral imperative to keep them alive and well. Each year the mass of zombie walks increases where children and adults alike become the living dead for a day. Macabre? Indeed. It seems that the very word “macabre” may have come into English from Hebrew. Hebrew words are based (mostly) on triliteral roots, words with three unchanging consonants. The Classical Hebrew word for “grave” is based on the root q-b-r. The prefixed m is often the preposition “from.” Macabre, morphed through Latin and French, could go back to the root meaning “from the grave.” Literally, the source of zombies.

Resurrection is among the most poignant of human hopes. Religions often assure us that death is not final, but we can never know that this side of the veil. Those we love go away, we hope, to a better place than this. It is no surprise that the largest zombie walk in the country is in Asbury Park. We can imagine better. Why can’t God?

According to Wade Davis, there is a powder that vodoun priests use to zombify a person. This involuntary treatment does not actually prolong life, nor does it really resurrect the dead. It is, like many religious treatments, a show of faith. In The Serpent and the Rainbow Davis describes how psychosomatic attacks span the globe. All they require is belief. If a person believes in curses or the evil eye, the results can be physical and fatal. We create our own reality. Over the weekend I watched What the Bleep Do We Know? again. I sometimes showed this movie to my classes. Here physicists and gurus together affirm that we create our own reality moment by moment.

Zombies have migrated from the realm of religion to secular society. It is hard to imagine our modern world without them. They are cut from the same cloth as All Souls Day, reminding us of our mortality and suggesting that there might be something more. It is a reality we create ourselves.

Riding on a bus with a bunch of coughing commuters may not be the best setting for reading about poisons and zombies. I am also aware that Wade Davis has come into criticism by some of his professional colleagues and that the movie based on his book, The Serpent and the Rainbow, may have led to an aneurism or two among scholars of Haiti. Nevertheless, Borders was closing down and a copy of the book remained on the shelf for an insanely low price, and October would soon be upon us. This past week I read Davis’ intriguing account of his experience with real-life zombies and the fascinating religion of vodoun. A number of issues were raised by his account, not least of which is that the feared religion of “voodoo” is a direct result of the evils of African slavery that brought indigenous gods into the realm of Christianity, and mixed them vigorously. My first “exposure” to vodoun was in the old James Bond movie, Live and Let Die. It terrified me as a child, and even with rational eyes, I’m not sure I fare much better as an adult.

No matter what one thinks of Wade Davis and his work, The Serpent and the Rainbow is a fascinating work. One of the most interesting aspects Davis raises is the continuing issue of defining death. Premature burial may sounds like the hysteria of a Poe-induced nightmare, but, as Davis shows, most methods of measuring death are susceptible to being fooled. Those who are termed “zombies,” in the vodoun sense of the word, are people declared dead by medical professionals, yet who are later found, after their burials, very much alive. Many readers will find this difficult to accept, but it is a phenomenon that goes back to Seabrook’s swashbuckling adventures of early last century and even before. If Davis is to be believed, it is thoroughly documented.

Paradigm shifts are seldom welcomed. We prefer to live within the comfort of the universe in which we grew up. Science and religion agree on this point—things are not what they seem. Zombies in the Walking Dead sense do not exist despite the fact that they are the kind most popularly known. We like them because they can’t hurt us; they lurch through the streets of our nightmares and our zombie walks, but they are not real. It could be, however, that our understanding of our world is woefully incomplete. Confronted with that which challenges our tidy universe, whether it be quantum physics or Haitian religion, we must consider the benefits of a mind kept open to the possibilities. Do vodoun priests in the hidden shadows of the Caribbean enslave the living dead? Disney answered with a resounding yes in Pirates of the Caribbean, but then, in Hollywood it is sometimes preferable to have the zombies in front of the screen.

A few months back I purchased a book entitled One Thousand Languages by Peter Austin. Not a “reading book,” this is more of a reference manual to the often bewildering profusion of languages in the world. Having dabbled in the study of about a dozen languages over the course of my academic career, I was interested in seeing what tongues are being spoken in places I’ve only dreamed about. After introducing a plethora of different communication systems, the book dedicates a significant section to endangered and extinct languages. There is a sadness about a language dying; it marks the end of an important aspect of a culture and a move towards a bland universality. 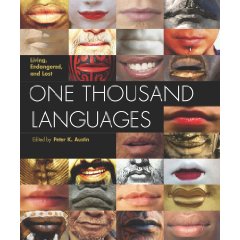 O say what did you say?

Then a Rutgers student sent me this link. It is a video of Wade Davis lecturing on the topic of the rapid disappearance of minority cultures around the world. Initially Davis begins by telling the students that when they were born (this lecture was delivered in 2003), there were 6000 spoken languages in the world. As of 2003, there were only 3000. The rate of language extinction is (was) about one tongue dying out every two weeks. What makes this degeneration so unfortunate, as Davis explains, is that many are dying unnatural deaths. Cultures are obliterated because of exploitation. More powerful members of nations (artificial constructs, all!) ensure compliance by encouraging uniform languages and monochromatic cultures. It is culturocide.

I would encourage my readers to view this video; it is 20 minutes well spent. A major component of these dying cultures is religion, naturally. Davis makes very important observations about this aspect of cultural non-diversity as well. And I can’t help adding that one of the phenomena he addresses is how zombies are made! Quite apart from my fascination with the monstrous aspect of religions, Davis’ cautions are essential to recognizing the plight of the once diverse human cultural domain. You won’t regret seeing this – it is nutritious food for thought.