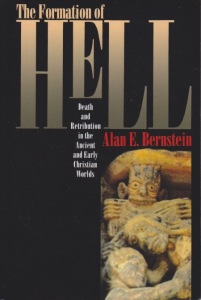 Some books are complex enough to require a slow reading.  Alan E. Bernstein’s The Formation of Hell: Death and Retribution in the Ancient and Early Christian Worlds is such a book.  For those of us raised in a faith primarily geared toward avoiding Hell, the concept becomes a lifelong nightmare.  It doesn’t help that, depending on your clergy you’re taught different, sure-fire ways of achieving that avoidance.  Often it hinges on “believing” the “right” thing.  Fundamentalists tend not to call it “doctrine” since that sounds rather Catholic, but the idea’s the same; it’s a tenet of faith.  As Bernstein shows, however, Hell is an idea that developed over a very long time with several different views of what happens after death.  There’s no single, linear progression, but rather a conglomeration of ideas from a variety of sources.

No single volume can cover all the background to Hell.  Bernstein focuses on Egypt for the early material, as well as Babylonia.  These early civilizations demonstrate that people have always wondered what comes next, and what happens to those who oppress others—the bullies of this life who don’t deserve the same eternal rest as the rest.  Usually some form of punishment awaits, but not always.  In the Hebrew Bible one of the great issues was the fact that everyone goes to Sheol, good and bad alike.  As in classical Greece and Rome (on which Bernstein spends a great number of pages) the concept of the netherworld is gloomy, but not torture.  Except in exceptional cases, of course.  The Greeks had Tartarus as a place for those who dissed the divine.

Even early Christianity didn’t have a uniform view of it.  The New Testament is decidedly divided on the topic.  Revelation seems to be the last word, but it’s not.  Later thinkers such as Origen and Augustine (who came to different conclusions) weighed in.  Catholic Christianity lavished great love on the latter and Augustinian views became disproportionately influential.  Reading his lack of compassion can cause nightmares, although he justifies it theologically.  The one thing I missed in Bernstein’s lengthy treatment was the Zoroastrians.  This religion of ancient Persia introduced a distinct dualism into the biblical world; it perhaps represents the first relatively developed concepts of Hell and Heaven.  Zoroastrianism suffers from lack of documentation, however, and it is difficult to parse it as meticulously as Bernstein does the other cultures covered.  This book requires much pondering as it’s read, and if you were raised believing this kind of thing it’s sure to bring back a nightmare or two.

Although it is difficult to tell from 32,000 feet, I think I might have flown over Purgatory on my way home from the UK. The two days I was in Oxford were uncharacteristically sunny and warm. Although it was cloudy around London when we lifted off, the skies cleared by the time we hit the Irish Sea and once Ireland came into view I kept a close watch for what I hoped might be Lough Derg, the site of what was once deemed to be Purgatory. Our flight path took us over the right region, but the maps in the back of the in-flight magazine are never detailed enough for navigation, and the lake itself is not large enough to appear on any but the most detailed charts. Still, I think I might have seen it. If this was Purgatory and I was overhead, I guess I must’ve been in Heaven for a while.

Symbolism began to kick in, despite the lack of sleep. Our view of the earth today corresponds in a rough way to that of the ancients. For sure, we are more sophisticated, as we suppose, but there remains a lake of fire beneath our feet and the heavens above our heads. The area in between, according to medieval thought, was Purgatory. It’s the place where we live. Believing in the intensely mythological development of a rich afterlife that borrowed elements from the Greeks, Zoroastrians, and Egyptians is hardly something anyone could undertake seriously in the modern world, but the trials we undergo here and now somehow make Purgatory believable as a symbol. When I think of the troubles over the past few weeks alone I can take some solace in a symbolism designed to help us avoid Hell.

As on my trip from New York, I watched hundreds of miles of ice floes, icebergs from the air. I’m not sure if this is unusual—I don’t fly overseas very often, and sometimes it is dark and I can’t see the water below. Of climate change, however, I am absolutely certain. We have undertaken to bring about Hell on earth because of industrial greed. I can’t help but compare how companies continued to promote smoking heavily even after they knew it was killing people. Lucre can make monsters out of ordinary humans. Was that Purgatory I saw back there, over the Emerald Isle? I may never know, but down here on the ground the warming trend continues. Perhaps the ancients knew more than we think they did.