A good metaphor gone bad can do a lot of damage. Like a loose cannon. Hell is a bad neighborhood for metaphors. Taken literally Hell can be hell. So it is that many evangelical Christians are abandoning the concept. Jumping ship on the Manichean outlook that has policed bad behavior for two millennia now. A recent article on National Geographic by Mark Strauss discusses why many leading conservatives are now casting Hell into the pit and looking for ways to make God look better. Like many metaphors, Hell best resides in a world of black and white. A dualistic world where there are no shades of gray (certainly less than fifty of them). A world where any behavior can be understood as good or bad, forward or retrograde, never neutral. You’re either for us or against us. There’s no Switzerland in this geography. That’s precisely why so many people want to keep Hell on a leash. 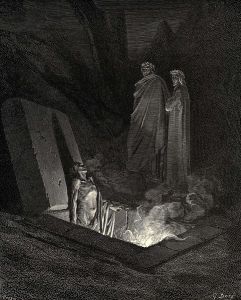 Hell probably never would’ve become such a motivator for good had Jesus not mentioned it. Prior to its encounter with Zoroastrian beliefs, Judaism held that the dead quietly resided in Sheol, a dreary place, true, but hardly fiery real estate. You worked out justice here on earth because that was the only chance you had. The dead were sleepier than early morning commuters and they received neither rewards or punishments. It was a much more egalitarian view of things. The dualistic Zoroastrians saw paradise and torment as a great image to explain evil in the world. The sorting takes place after this life is over. Jesus used such language as well, and the image became canonical.

Evangelicals are now starting to think through the implications of all this. A God with the kinds of anger issues that condemn people literally forever might be problematic. Sure, we may get angry at our enemies, but only the most truly heartless person has no pity on their suffering. What does it say about God if his anger lasts for eternity? Some, therefore, are trying to put the metaphor back into Hell without losing the strict divisions for which the good news crowd is famous. Instead of full-time Hell, perhaps there’s part-time Hell with time for repentance. Or simple annihilation. Metaphors lose their power when they come to be taken literally. Hell is such a loose canon. Doctrine among the doctrinaire is often non-negotiable. Although some may try, as a whole, the fires of Hell can never be extinguished. At least to those who understand figures of speech as statements of fact.

1 thought on “Freezes Over”