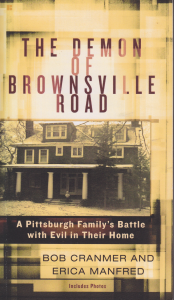 Far be it from me to question someone else’s demons, but every story has at least two sides. After reading Bob Cranmer and Erica Manfred’s The Demon of Brownsville Road: A Pittsburgh Family’s Battle wit Evil in Their Home, I have to wonder about the other side. I have no doubts that strange things happen behind closed doors. Indeed, the aspect of space, or location, has far more entanglements than our science allows. I don’t question the haunting described in the pages of this book—Bob Cranmer was once a prominent political figure in Pittsburgh and has the credibility that comes with elected office (or at least used to). What is open to question is the interpretation.

The Catholic tradition, which is involved here, does accept that a demon can infest a house. The way this account is laid out, however, is as a personal battle between Cranmer and the demon. The story is not unlike Amityville—family moves into house, discovers it’s haunted, and has to decide what to do about it. They call in a priest. From there the stories diverge. Cranmer’s family started experiencing various misfortunes. These were attributed to the demon. The story is strongly patriarchal; Bob Cranmer is a take-charge kind of guy and he alone can take on this fallen angel in the final instance. There are priests involved—including a prominent monsignor in Pittsburgh—but also clergy from other faith traditions and a paranormal investigation group from Penn State. Did the events happen as described? I don’t know. I wasn’t there.

A few things seem a little off here, though. A Catholic official stating that sex between married couples drives off demons? The discovery that the sins in this house stem from it being an illegal abortion clinic? That Native Americans murdered a family now buried on the property? The book doesn’t give documentation because it’s not that kind of book. Don’t get me wrong. I’m glad the Cranmer family finally found relief from the presence that was haunting their home. Even watching a movie like The Amityville Horror makes people uncomfortable because the idea is so scary—home is a sanctuary and when it’s invaded by an invisible (in this case sometimes visible) enemy it becomes a nightmare. The reader is left with the impression that it came down to a battle of wills and that of a former Republican politician was stronger than that of one of Satan’s minions. Some things, particularly in the climate these days, are difficult to believe.